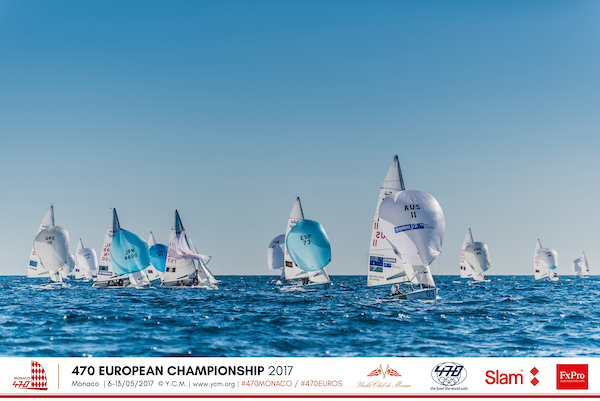 Light wind meant no Medal Race was possible in either of the 470 Women or 470 Men fleets in Monaco today, so the overall standings from yesterday hand both Afrodite Zegers/Anneloes van Veen (NED) and Carl-Fredrik Fock/Marcus Dackhammar (SWE) their first ever European Championship titles.

Final day frustrations for some as any hope of completing a Medal Race dwindled in the light winds. Whilst the series leaders in both the Men’s and Women’s fleets had a handy points advantage and looked assured of victory, a false move today could have toppled their gold medal hopes as chasing medal hunters eyed up every opportunity.

A week of diverse conditions from the extremes of light wind to demanding ferocity of 30+ knots and 4 metre waves rewarded a deserving leaderboard.

Soon after 1100 hours, the Women’s Medal Race fleet headed to the race track for a scheduled start of 1200 hours, but were swiftly under postponement. Waiting in hope, the teams stayed patiently on the water for around three hours, but by around 1430 hours, with no breeze in sight, the Race Committee sent the women back to shore, but sent the men out in anticipation of a race.

A Men’s start did get underway, but was soon abandoned due to the insufficient and unstable breeze.

Alongside the Olympians and experienced teams, a massive cluster of new faces have made the transition to Olympic sailing in the 470 Class. For the younger teams, many were gaining experience ahead of contesting the 470 Junior Europeans in Italy and 470 Junior Worlds in Japan in a few months’ time.

470 Women’s
Speaking after racing, Zegers said, “Last year we were happy with the silver medal, as it was the first time at a big event that we had a medal, but this year the goal was to dominate. We have been working really hard after the Games to come up to the next level, and we are happy that this week has ended,” she smiled.

“It was a really tough week for us. We started off really bad and we made a huge catch up in the end, and we were really glad to see our weaknesses for the next event.”

The pressure of the wait is a challenge in itself, but at elite level it is all part of the experience.

“Actually we have some experience of this,” laughed van Veen. “Also in Rio, the Medal Race day, the first one it didn’t happen. And you just have to go out on the water, try to look around and keep focusing on what is happening with the wind. So today we tried to keep ourselves entertained, but now it is over.”

Speaking on the winning feeling, she added, “I was very happy with it. But still on the other side we are really focused on the Worlds this year, but this medal is really nice for us.”

With their back to back wins, Zegers/van Veen are already installed as favourites for the years leading to Tokyo.

“Yes, that is what people say,” said Zegers. “But for us it is just important to become the best we can be and the end goal is the Tokyo Olympic Games. We are going to do anything and everything for it. So far, we are just glad to be back and we will keep going.”

A career best scorecard also for Italy’s Elena Berta/Sveva Carraro. Double-digit results on the opening day were soon offset by a string of top ten finishes.
“Now we just want to celebrate. At this moment, I don’t realize what we have done,” said Berta.

“It couldn’t get better to start a new season,” chipped in Carraro. “We have worked very, very hard and we are just super happy.”

Former team mates for London 2012, Agnieszka Skrzypulec/Jolanta Ogar (POL) have relaunched their partnership out front with a bronze medal, but it is only the start according to Skrzypulec.

“I think that our best time will come. This was a really hard regatta, really light wind, so I think that we have a lot to improve to be better and we have this feeling we can be better. I am really happy as this is my first medal in my career.”

For Ogar, bronze was the only colour not yet in her Championship medal haul, so she is equally delighted, adding, “I was missing the bronze in the Europeans, so my next goal is to collect an Olympic medal.”

470 Men’s
Carl-Fredrik Fock/Marcus Dackhammar (SWE) have been unrelenting in their pursuit of glory here in Monaco. Whatever the conditions dished up, they took it on.

Commenting on the week, Fock said, “We had some problems with our gasket in the breezy conditions, but except for that it has been a wonderful week for us. I am really happy.

“I was nervous when waiting of course, as you always want to race and the Medal Race is good training. But we managed to do quite well out there with our start, and I think it would have ended well anyway,” he explained in prediction of the outcome if the Medal Race had not been abandoned.
“It feels really, really good that we are in the right direction and the training has paid off really well, so this is good for the future.

“It is wonderful to have Markus as a crew and he is really good on tactics and boat handling and always supports me. This is a boost for us and hopefully we will get some attention at home. Sailing is not that big a sport in Sweden.”

Dackhammar added, “We have had a consistent and good week that is for sure. We have had a constant progression over the past year and there has been a lot of hours and work behind it. I am relieved. It is amazing, a really good feeling.”

After being presented with their gold medals, Fock took to the microphone to thank the Yacht Club de Monaco for their outstanding hospitality, and Organising Committee for overall event management.

Mathew Belcher/Will Ryan (AUS) finished third overall on the Open European leaderboard, in another to be expected strong form performance. The European Championship bronze medals went to Spain’s Jordi Xammar/Nicolas Rodriguez (ESP), marking a first ever podium finish for the pair at a senior Championship.

“We are really happy. We went home from Hyeres wanting more,” Xammar said in reference to their eighth place finish at the last World Cup event. “We have come here and sailed as we know and now to get a bronze medal is fantastic. This is our first medal together and it looks like we are working well.”