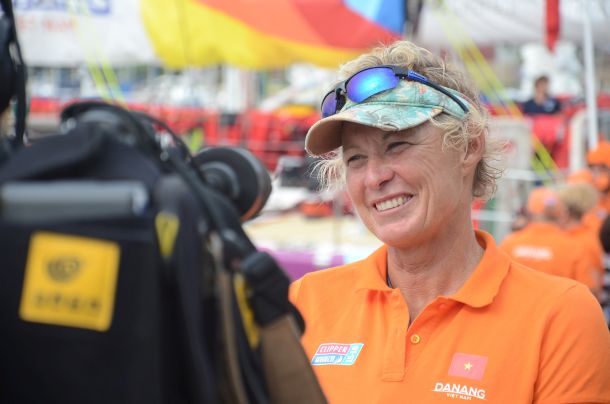 Wendy Tuck, the Sydney Skipper of team Da Nang-Viet Nam, has arrived into Rio de Janeiro’s Marina da Gloria at the end of the 5,200 mile race which left London, UK a month ago.

Wendy, 50, the first Australian female Skipper in the 20-year history of the race, finished tenth over the line in Race 1 of the Clipper 2015-16 Round the World Yacht Race, known as one of the planet’s toughest endurance challenges.

Da Nang – Viet Nam finished Race 1, the Atlantic Trade Winds Leg, off the Brazilian coast at 2100 local time on Wednesday September 30 after 31 days and nine hours at sea. The race was shortened for the remaining seven teams still racing to avoid light and variable conditions causing further delay and to ensure all teams are ashore by Friday afternoon local time ahead of the prizegiving.

Positions of the seven teams still at sea were decided by taking the shortest distance to the eastern end of the Rio finish line. Final positions will be verified by the Race Office once team redress has been applied.

On arrival, Wendy said: “It's been long and hard at times, but now that it has come to an end, I’m a tad sad. It has been great seeing the crew grow in confidence and learn new skills along the way.

“The Leg 1 highlights have been leaving London – it was such an incredible atmosphere. The first few days saw us settling into the rhythm of the boat. The Bay of Biscay was kind to us, and we enjoyed crossing it while surfing waves under kite and a full moon. I loved crossing the Equator and passing the few groups of islands.

“We are all looking forward to Leg 2 – we have learnt do much. I have already started our planning and looking at the routeing charts. It will be a chance for us to try and redeem ourselves,” she added.

Round the world crew member David Graney from Hobart said: “This has been completely different to my previous sailing experience. All my sailing has been on smaller boats and I’ve done very little ocean racing before this.

“The Clipper Race really is the people’s race. It is unlike any other race, for example in the Volvo Ocean race you have paid professionals but here we have people who have never sailed before they do their four weeks training. I’m out of my comfort zone myself but for them it’s a far greater challenge and I’m so impressed. Everyone on the boat inspires me in some way.”

LMAX Exchange was the winner of Race 1 after finishing at 1600 local time on Friday 25 September. The Clipper Race is the longest ocean race in the world – 40,000 nautical miles long, it crosses between six continents and visits 14 ports over its eleven months duration. It is the only event of its kind available to amateur sailors and international adventurers of all ages and from all social backgrounds.

Legendary British yachtsman Sir Robin Knox-Johnston, the first man to sail solo, non-stop around the world in 1968/69, founded the race to allow anyone, regardless of previous sailing experience the chance to experience the thrill of ocean racing and for some the rare opportunity to complete a circumnavigation – something less people have achieved than have climbed Mt Everest.

The next stage, Race 2: The Stormhoek Race to Cape of Storms Cape Town, South Africa, will depart Marina da Gloria on Wednesday 7 October.

Between November 2015 and January 2016, the all-Australian Leg 4 will visit Albany, Western Australia, Sydney, Hobart as part of the Rolex Sydney Hobart Yacht Race which the whole fleet will compete in as part of the circumnavigation, and Airlie Beach.

You can track the progress of the rest of the fleet via the Clipper Race Viewer at www.clipperroundtheworld.com/raceviewer