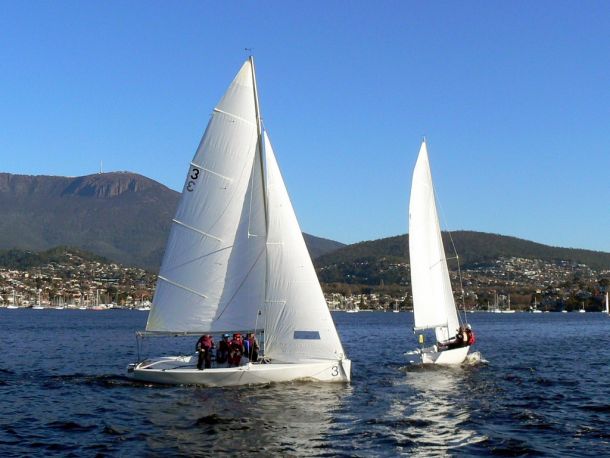 Elliott 6s racing on the river. Photo by 42South Media.

Inspired and supported by yachting philanthropist Graeme Wood, the Metre Series will be conducted each Thursday evening of the summer twilight racing conducted alternatively by the RYCT and the Derwent Sailing Squadron.

Unlike the social sailing concept of twilight racing in cruiser/racer yachts, both the Metre Series and the SB20s will be full-on, one-design racing on a special course.

Six Elliott 6s will compete while the SB20 fleet, racing for their Summer Pennant, is expected to be between 15 and 20 boats.

The first race for the Metre Cup, the SB20 Summer Pennant and the non-spinnaker twilight divisions will be on the evening of Thursday, October 8.

Announcing the new Metre Series today, RYCT Commodore Matthew Johnston expressed the Club’s appreciation of the support of Graeme Wood, the founder of wotif.com and a member of both the RYCT and DSS.

“Graeme has contributed a great deal to yachting in Sydney and it is wonderful to see him showing so much interest in sailing in Hobart, as a regular competitor with his 8-metre class yacht Juana and now in supporting a new concept in sports boat racing for young sailors.” the Commodore said.

“The Elliott 6s are fast and exciting to sail and are ideal for young sailors between the ages of 16 and 25 looking to make the transition from off-the-beach dinghy classes to high performance keelboats,” the Commodore added.

Commodore Johnston said the RYCT was seeking expressions of interest from experienced sailors in this age group.

“It is not necessary to be a member of the RYCT to be involved, but all participants must be members of a Yachting Australia/Yachting Tasmania affiliated Club,” he added. “Boats can be skippered by young sailors, but those wishing to crew can also join boats with experienced skippers provided.”

The Metre Series format will consist of two windward/leeward races of about 30 minutes duration, held each week as part of the Thursday twilight competition. Prizes will be presented at the end of racing, back at the host club.