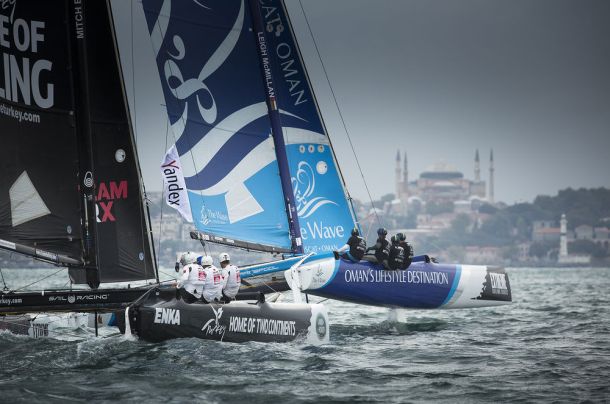 Team Turx in pursuit of The Wave

The Wave, Muscat opened the Extreme Sailing Series Act 7, Istanbul presented by Yandex in style with a string of back-to-back race wins.

Tipped as the Act in which British helm Leigh McMillan would make a definitive move for the Series title, today’s opening performance certainly reinforced that claim. McMillan hit the podium in all seven races to finish at the top of the Istanbul leaderboard at the end of day one on 65 points.

“We came out with our heads in the game and knew how we wanted to play it,” said McMillan. “There are always going to be challenges and difficult races but we love sailing in the heat of the moment,” he added.

But it wasn’t without a serious challenge from the chasing fleet. First to apply the pressure and break McMillan’s stride was British crew GAC Pindar with the talented Chris Draper on the helm coming into his element in the close-court Stadium Racing at the mouth of the Bosphorus.

After a disappointing result six weeks ago in Saint Petersburg, today saw a return to form for SAP Extreme Sailing Team, with the Danish crew taking two confidence boosting race wins to finish the day in second place on 56 points, with Red Bull Sailing Team rounding off the overnight leaderboard in third.

It might not have been blue skies and sunshine for the first day of racing in Turkey, but against the moody backdrop of the Aya Sofya and the Blue Mosque, the fleet relished the steady 18-knot breeze.

Showing what they are capable of but lacking the execution, Oman Air lead the mid-fleet pack in fourth, tied on points with third placed Red Bull Sailing Team and perfectly poised to hit the podium. Draper’s GAC Pindar are 14-points behind the Omani team in fifth.

Returning to the fleet after a two-year hiatus, French helm Pierre Pennec onboard Lino Sonego Team Italia was understandably a bit off the pace, finishing the day tied on points with the home favourites Team Turx, with Gazprom Team Russia – racing for the first time with an all Russian crew – in eighth place.