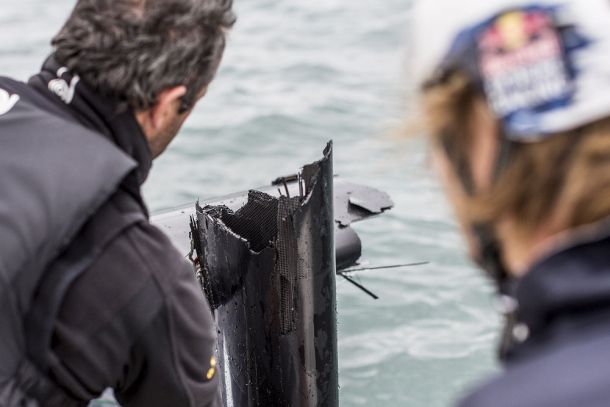 Red Bull Sailing Team made a dramatic and unexpected exit at the Extreme Sailing Series Act in Istanbul today after their mast broke in the second race. With the wind fluctuating from 12-20 knots, the mast snapped in spectacular style across the top third of the rig damaging the sails, and with no one onboard hurt, the Austrian team limped back to shore to begin overnight repairs.

“To miss the rest of the day’s racing was incredibly frustrating,” commented tactician Hans Peter Steinacher, “especially when we were out in front.”

Starting the day in third place the Austrian team now plummet to last on the leaderboard in Turkey and will have their work cut out to recoup the points if they make it back out on the water tomorrow.

But it wasn’t just Red Bull Sailing Team that took a hit in today’s unpredictable conditions. No team escaped unscathed as Istanbul turned up the heat with penalties going to six of the eight crews and Team Turx suffering minor damage after a collision with GAC Pindar.

But able to keep the boat rolling when the racetrack got tricky, The Wave, Muscat’s experienced helm Leigh McMillan shone through. Executing smooth gear changes in the gusty conditions, McMillan added three more race wins to his already impressive score-line.

The Wave, Muscat finished the day on 132 points and have extended their lead by a further six points over chasing rivals SAP Extreme Sailing Team in second place who also added three race wins to their scoreline.

Stepping up their game to challenge the leading boats, Oman Air put in a consistent performance. Skipper Stevie Morison chipped away at the fleet moving up into third place, rounding up the overnight podium positions on 107 points.

But it was a frustrating day for fourth placed GAC Pindar whose inconsistent results diluted the advantage gained from two race wins early in the day.

“We had the world in our hands and just threw it away over a stupid decision. It’s easy to make decisions too quickly and rush yourself, you just need to remind yourself you are in control and you should just relax,” said skipper Chris Draper.

Gazprom Team Russia finished the day in sixth with hometown heroes Team Turx in seventh, enjoying the support of the spectators on shore.