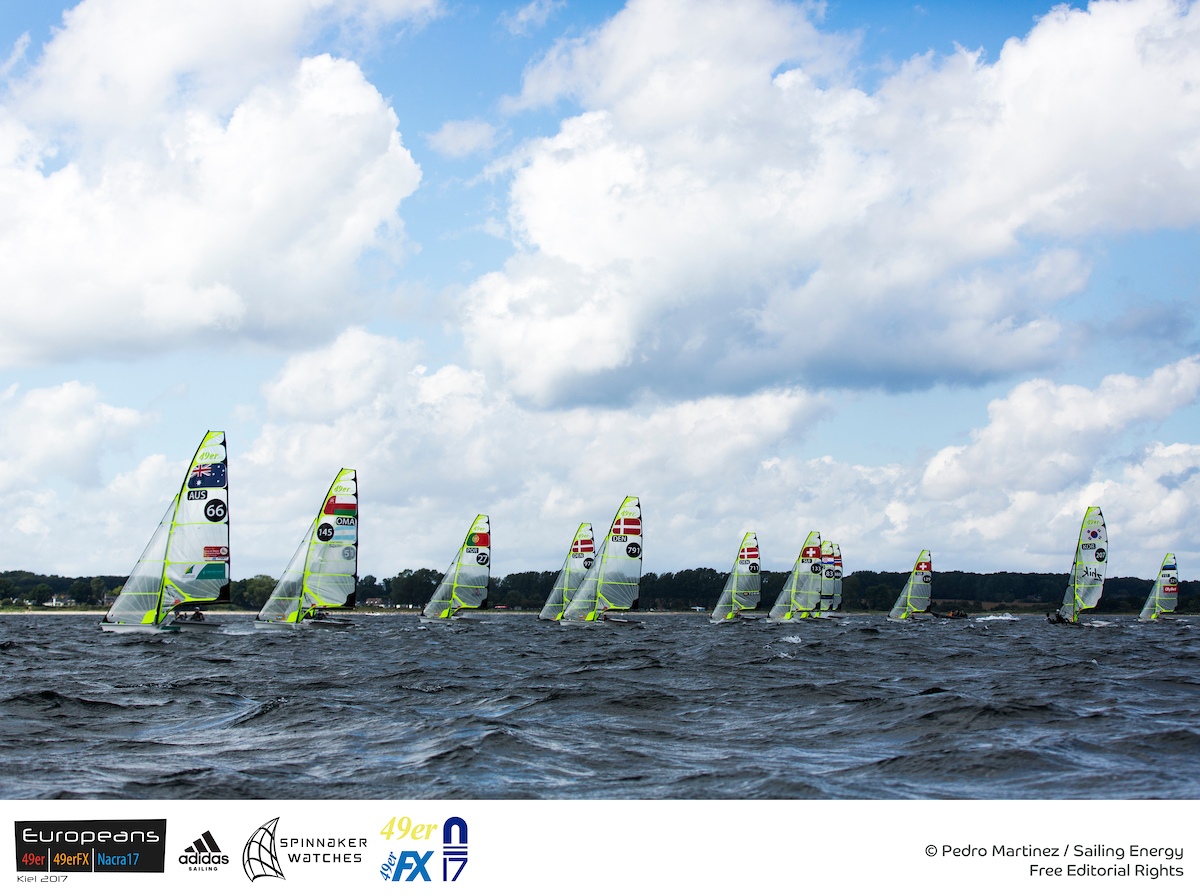 In a day characterized by huge gusts, out-of-control runs, capsizes and wild wind shifts, Tina Lutz and Susan Beucke took complete control of the 49erFX fleet at the European Championship in Kiel, Germany.

“In that breeze, we just try to survive,” said Lorenz. “It doesn’t matter how strong you are, you just try to do your best.” Jurczok said she was surprised they had so many capsizes. “I really thought we were going to be ok, but it was too much and we went for some swims,” she said.

In contrast, Beucke said she and Lutz were fully prepared to swim. “We agreed that we were going to capsize, so we should try to be near the front so we didn’t lose too many boats,” she said of a day where the pair may have been the only FX not to capsize.

“Somehow, we didn’t flip over at all.” Lutz added that just weeks ago, similarly strong winds were a major problem, but that they seem to have overcome them, at least for today. “We had a very lucky day, I think.”

All four crews said their medal performance came at a perfect time. “This takes a lot of pressure off for our Worlds, both from a funding standpoint and for our confidence,” explained Lutz. Along with her crew, she’s the first German European Champion in 49erFX Class history.

In the newly configured foiling Nacra 17, a first-time multihull helmsman took the inaugural European Championships despite the worst score of the day – a 6,6,8 scoreline in the 8-boat medal fleet.

“We were maybe a little too conservative out there today, but we wanted to keep it safe and bring the Championship home,” said former 49er skipper Ruggero Tito, a member of Italy’s army.

Tito took the title along with Italian crew and lifelong catamaran sailor Catarina Banti, and the pair seems to have taken advantage of the newness of the fleet, adapting quickly to the light and moderate air to bring a nearly unassailable lead to the final day of racing.

“We only sailed a bit more than a week on the boat, but like everyone else we were learning,” said Tito, who thinks he and Banti did a solid job adapting to the new boat as they learned its new modes. Tito said it was the foils that convinced him to join the Nacra fleet. “I loved the 49er but this is an entirely new challenge, and we’re both enjoying it a lot.”

Fernando ECHEVARRI/Tara PACHECO continued their consistent performance, moving up to second place to take the silver medal home to Spain, while UK Olympian Ben SAXTON with new crew Katie DABSON swept into the Bronze spot after winning the final two races of the event.

“We had a moment in the first race where I’m not sure how we didn’t capsize, but we’re very happy with how we came back in the next two races,” said Saxton. Dabson said she’s excited to come away with a medal in their first event together. “We’re looking to keep this momentum going as we head towards Worlds in a bit,” she said.

Despite a strong, controlled performance in the blustery breeze, Denmark’s Lin CENHOLT and Christian Peter LÜBECK fell out of the Medal Race on the final gybe of the final race. “Today was some of the most fun sailing ever. The only thing that I didn’t like was the results!” said CENHOLT.

All eyes were on the Men’s 49er fleet as they sailed out to the course. Spectators in Kiel and thousands around the world waited with bated breath to find out which heavy air-specialist team would rise to the top in huge breeze.

Would it be Fremantle’s David GILMOUR/Joel TURNER or the UK’s Dylan FLETCHER/Stuart BITHELL? Would their battle allow ultra-consistent performers James PETERS/Fynn STERRITT to sneak into the gold medal spot?

As enticing as this battle would have been, it will have to wait for another day: Race Officer David Campbell-James saw the breeze hovering at 25 knots with bigger gusts and called the 49ers off, ending their regatta without any medal racing. “With a clear increase in the breeze coming, there was no opportunity for safe racing ahead, so unfortunately we had to abandon,” Campbell-James said.

Fletcher said he was disappointed in missing out on the chance to put an exclamation on his Championship performance. “Winning without racing on the last day somehow feels incomplete,” said the first-time European Champion helmsman, and the first British titleholders in more than 11 years.

“We’ll take it, and we’re satisfied with our performance despite a few obstacles, but it would have been nice to get in one race today.” The team’s extensive training camp in Weymouth, England has helped to give them real comfort in extreme conditions. “There’s nothing quite like sailing in this much breeze,” he said.

While Joe Turner wasn’t relishing the idea of being ‘the meat in a British sandwich’, both the Aussie crew and helmsman David Gilmour were clearly disappointed to have missed their chance to fight with Fletcher and the rest for gold.

“We wanted to get back to the lead, but at the same time, those conditions could end your regatta in a hurry,” said Gilmour, who was happy with his result but ready for the rematch in two weeks’ time in Portugal.

“We’ve been building toward this World Championship for a while, and the confidence we earned here gives us a good boost towards that goal,” he said.

Fletcher relished the opportunity to show how much he and Bithell loved what others call ‘survival conditions’. “It’s definitely on out there, but the top teams could probably handle it – we think we could,” he said. The team’s extensive training camp in Weymouth, England has helped to give them real comfort in extreme conditions. “There’s nothing quite like sailing in this,” he said.

The fleets split up for their World Championships in just a couple of weeks’ time. In La Grande Motte, France, the Nacra 17 Class will welcome back several top performers from Rio 2016: Gold Medalists Santiago Lange/Cecilia Saroli, American foiling specialist Bora Gulari, four-time Nacra 17 World Champions Billy Besson/Marie Riou and many more for the ultimate test on the waters of the Mediterranean.

For the 49ers and FX fleets, the next big challenge comes at the Porto (Portugal) Worlds. Best known for the sweet wine that bears its name, sailors know Porto as one of the lumpier venues on the calendar. “Reliable breeze, big ocean swells, and a wonderful sailing venue are in store for the entire 49er and FX fleets, and we’re excited to see the fleet come back together so soon for the most important regatta on the annual calendar.