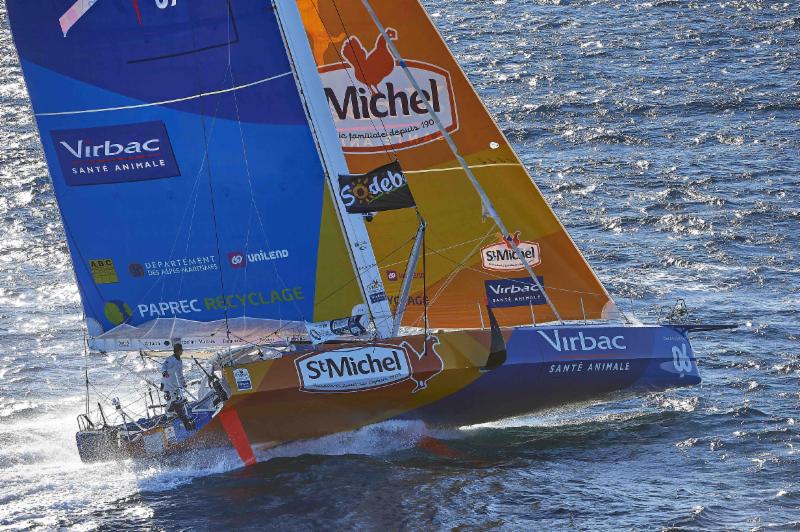 Thanks to our modern day lifestyles, a frequent problem facing race boats owners is finding willing and available crew. One solution is to sail with less people, an ultimate expression of this being two handed racing. Therefore it is no surprise that the IRC Two Handed class in this Sunday's Rolex Fastnet Race has swelled, with 60 boats entered (plus nine IMOCA 60s). This was also helped by the outcome of the 2013 race, famously won for the first time ever by a two handed crew – Pascal and Alexis Loison on the JPK 10.10, Night and Day.

So far in the 2017 RORC Season's Championship, leadership of IRC Two Handed has been a fight between two Jeanneau Sun Fast 3600s: Rob Craigie and Deb Fish on Bellino and Ian Hoddle and Ollie Wyatt on Game On. Bellino won the Cervantes Trophy, Myth of Malham and Morgan Cup; Game On the De Guingand Bowl and the Cowes Dinard St Malo Race. Also in the mix were Ed Fishwick and Figaro sailor Nick Cherry on their new 3600, Redshift Reloaded. However come the Channel Race, the first occasion the Loisins raced this year, they blitzed it, winning by an hour on corrected from Game On and Bellino.

Bellino's Rob Craigie, who currently leads IRC Two Handed overall, has been racing shorthanded since the 1990, both doublehanded and solo – he was class winner and second home in the 2009 OSTAR transatlantic race from Plymouth to Newport. His co-skipper, Deb Fish was also a solo sailor who campaigned a Sun Fast 3200.

Craigie says that while solo offshore racing is a different sport, two handed is much closer to fully crewed. “If you are a skipper who just stands at the back and shouts, it will be a big change. If you are a skipper who gets involved, then less so. Manoeuvres take a bit longer as you've got to move the sail bags around and get them up and down.”

On board, 'third' crewman is the autopilot, although Craigie admits that they use it less. “We are going back to hand steering because we find it faster although in the Fastnet you have to sleep more to be competitive.” However it depends on the wind and sea state. “In waves the boat weaves a bit more than it would, even with an average helm.”

Dutch two handed offshore champions, Robin Verhoef and John van der Starre are entered on the J/122E Ajeto! The last three Rolex Fastnet Races they campaigned a J/111, finishing seventh in the 54 boat Two Handed class last time. They acquired their new boat this winter, which from the outset has been set up for shorthanding, with a heavier, deeper keel and less sail area. “To make it easier to sail shorthanded,” explains van der Starre. “And we can adjust the mast while racing, which will be an advantage.”

So why do they race doublehanded. “Why? Because we are both a little bit crazy probably! Robin and I really like sailing shorthanded and it is always a hassle with a big team,” van der Starre explains.

As to how they divide up the labour, generally if one is sleeping the other goes into solo mode, calling the other on deck for manoeuvres. When both are up they typically play to each other's strengths: “Tactics is more my part,” says van der Starre. “Robin is little stronger, so he does the heavy stuff, getting jibs up and down and gennakers, etc.”

On board they don't run a watch system and do rely on the pilot. “The first 20 minutes you are better, but after that the pilot beats you,” says van der Starre.

But the real grand masters of doublehanding are the IMOCA 60 sailors. And of them king is Jean-Pierre Dick, who has won two Barcelona World Races, two handed non-stop around the world and three Transat Jacques Vabres, two handed west across the Atlantic. Previous co-skippers included Damian Foxall, Loick Peyron and Jérémie Beyou. This time he is racing his foil-assisted Virbac-Paprec 3 with three time Solitaire du Figaro winner, Yann Eliès.

So what's his secret? Dick agrees with van der Starre: “It is important to work and be effective as a couple rather than working just as two individuals. We try to be changeable as everyone has their own skills, so you try to take the experience of both people to get the best result. So this time, I have better knowledge of the boat while Yann is bringing his new view and has a lot more experience of the Channel from his Figaro racing. But we also need to enjoy it and not argue too much! Fortunately we are both 'senior' sailors now and we have similar thinking.”

As to their sleep – Dick says that they will have a rough watch system, while keeping it flexible, according to the conditions and the workload.

He is also looking forward to seeing how his VPLP-Verdier IMOCA 60 behaves now she is out of 'Vendée mode', substantially lightened and with better optimised ballast and keel weight.