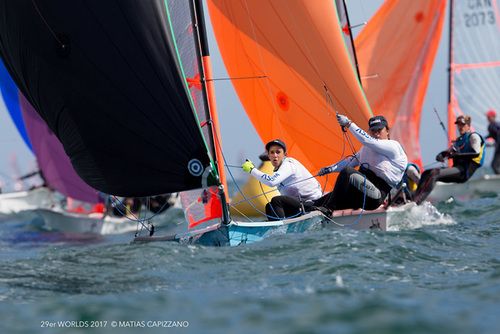 The delay was an added challenge on an already tricky, tight day. Light and unstable wind conditions continued to plague the event, but the Qualifying Series wrapped up with a total of nine races.

The fickle breeze did not stop Annabelle Davies/Madison Woodward, AUS, from getting their first bullet and finishing the Qualifiers as the top female team; with Tania Bonilla/Nuria Miro, ESP, second.

If there had been any expectation the US teams would have a huge local knowledge advantage, that was shot down by abnormal weather conditions, brought on by storms off Mexico. Neil Marcellini/Ian Brill, USA, edged in at fourth in the Qualifying Series, with Nicolas Martin/Damian Saponara, ninth.

The top 50 teams will advance to compete in the Gold fleet of the Finals August 3 through 5. The second 40 teams will move to Silver, and the balance to Bronze.

One hundred and twenty nine teams from 17 nations are participating in the six-day World Championship event hosted by Alamitos Bay Yacht Club. Competitors’ average age is estimated to be 16; with a few barely in their teens, like Ireland’s wee Lola Kohl (racing with Johnny Durcan).

But one couple touts a combined age of 75. Jaclyn Manrique and Patrick Szeto, of California’s Sequoia Yacht Club, have a lot less experience than their younger rivals, but plenty of gumption. They’ve been sailing the 29er just a few months, and finished the Qualifying Series at the bottom of the leaderboard.

“Dead last,” Szeto joked, but with a smile. Their goal was to learn, and they have: logging their best finish of the series – 51 – Wednesday. It didn’t get them into the Gold fleet, but they did meet many helpful racers, coaches and parents, they said, on their 29er quest.

It Takes a Village

Regatta Chair Ed Spotskey said the seeds were planted three years ago, to host the 29er Worlds at ABYC, saying the club’s stature and PRO Mark Townsend’s reputation is why they were chosen. “But the nitty-gritty work kicked in around March,” Spotskey explained. While ABYC has a total membership of 400, over 150 signed up to volunteer. “That’s a solid 50-percent of our active members,” he pointed out. “All excited to be a part of it.”

And they were put to the task, as 260 sailors, 47 coaches, parents, supporters, race committee staff and more – plus containers of boats and equipment – began arriving at the bayfront facility. “Racing didn’t start until July 25, but teams and their equipment started arriving July 5! We weren’t staffed for that, that early; but everyone stepped up. The volunteers came forward, it was very rewarding.”

Spotskey said his team also learned a lot by running the 29er Nationals the week prior. “What we thought was going to happen, and what really happened, were two different things. Anything that wasn’t working, we fixed. It was a great learning process and everybody, regardless of whether they were Race Committee, ABYC staff, Food and Beverage, or what – everyone was glad we had that event first, so we could be properly prepared for the Worlds. There’s a lot of great teamwork taking place out there on the water, but I’m proud of the teamwork that’s taking place here too.”

“Classic Long Beach conditions” are expected to return for the balance of the week, bolstering competition in the Finals. Clear, blue skies are forecast to bring steadier, stronger wind, as inland sun and temperatures stimulate the sea breeze.

With improved conditions, and a clean slate – scoring is scratched and competitors start anew –the 29er World Championship Title is still up for grabs.

Racing continues on the waters off Alamitos Bay, beginning at noon daily. Prize giving and closing ceremony is slated for Saturday evening, on the grounds of ABYC.