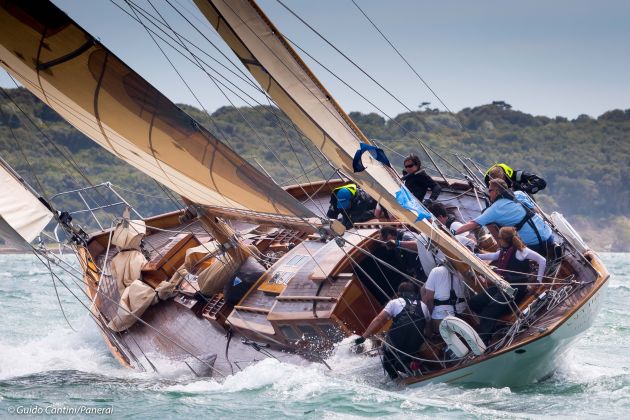 11/07/2017
10 July 2017 – Day two of Panerai British Classic Week 2017 was to have featured the Around the Isle of Wight Race sponsored by EFG, but the weather forecast promised a combination of strong south westerly winds and a big ebb tide. With concern about the potential height of the seas at Hurst Narrows, the decision was made to keep the yachts in the relative shelter of the Solent, and so the race became the Nab Tower Race sponsored by EFG. The new course took the boats east from the Squadron line to the Nab Tower, then back through the Solent to Lymington Bank off Yarmouth, and finally home to finish off the Royal Yacht Squadron.
With only five knots of wind from the west and a strong flood tide going east at the 08.00 appointed start time, the boats had to finely judge their approach to the line. Sadly, the Class 3 yachts Cuilaun owned by Brian Smullen, Lutine of Helford owned by James Youngman and Josephine owned by David Messum were all judged to be over the line and failed to return. For everyone else the race offered a glorious tour of the Solent with the wind building throughout the day. Beating the entire length of the Solent might have been character building, but the long seat of the pants run in 20+ knots all the way back from Lymington more than made up for it.
In Class 1 for the Modern Classics, Irving Laidlaw’s Spirit 52 Oui Fling led the fleet home by 30 minutes, but behind them Sean McMillan’s Spirit 52 Flight of Ufford was making time on handicap. Flight gave it her all, but couldn’t quite catch up and after more than seven hours of racing Oui Fling took victory by a mere 48 seconds. David Grylls’ Spirit 46 Helen of Durgan romped home for third.
In Class 2 Giovanni Belgrano’s 1939 Laurent Giles sloop Whooper claimed her second victory of the regatta, beating Gildas Rostain’s 1968 Olin Stephens designed One Tonner Volonte by over six minutes.  Third place in Class 3 went to Firebrand, the 1965 Sparkman & Stephens sloop owned by Ramona-Ann Gale.
Four-time Sonar Class Paralympian and three-time Sonar World Champion Hannah Stodel joined Whooper’s crew for the day and summed up her first classic yacht race win saying “What a fabulous boat. I had such a good time racing with the crew who were very welcoming. Conditions today were pretty feisty and I was amazed at how hard they were pushing the boat considering her age. Coming home to find out we had won made up for a very long and painful upwind leg the entire length of the Solent!”
In Class 4 a number of the smaller boats decided that Panerai’s legendary hospitality was calling louder than the heavy airs beat to Lymington and retired.  Only two boats in this class finished with Richard Matthews helming his Stella Scorpio to a six-and-a-half-minute win over Simon Payne’s 1961 Nicholson Jolina Damian B.
Class 3 also saw a number of retirements, but Sir Michael Briggs’ 1904 Fife 30 Linear Rater Mikado reveled in the conditions and took first place by five and a half minutes from Jonathan and Scilla Dyke’s Robert Clark 10 Tonner Cereste. Last boat to finish on the water after nine hours, twenty-four minutes and fifty-two seconds was Robert Veale’s Cheverton sloop Danegeld, whose perseverance won her third in Class 3.
The Metre Classes elected not take part in the long race and instead raced a shorter Solent course.  Murdoch McKillop’s 1931 William Fife designed Saskia showed a clean pair of heels in the 8 Metres with Christopher Courage’s 1936 Alfred Mylne design Helen second and David Parsons’ Athena, built and designed in 1939 by Tore Holm, third.  Robin Richardson and his crew aboard St Kitts, an Ian Howlett design from 1987, won the 6 Metres from Fenton Burgin’s J Anker designed Sioma in second and Mena, owned by Charlie Hatfield and designed by Charles Nicholson in 1938, third.
Tomorrow the boats return to shorter Solent courses for Race 3 of the series.  Sadly, the forecast is for heavy rain from mid-morning onwards, so whilst racing is expected to go ahead from 10.00 as planned, the evening’s Open Yachts Pontoon Party sponsored by Spirit Yachts and Classic Boat has been postponed until Thursday.