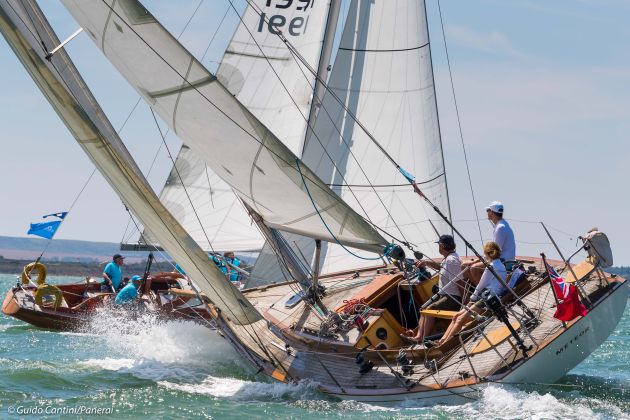 9 July 2017 – The opening race day of Panerai British Classic Week 2017 was an absolute scorcher with barely a cloud in the sky and glorious sunshine showing the fifty-one participating classic yachts off to absolute perfection.

The regatta opened with a Parade of Yachts past the Royal Yacht Squadron.  Each of the classes and several of the supporting classic motor yachts lined up to parade past Royal Yacht Squadron Rear Commodore Yachting Jonathan Perry who took the salute as the canons fired, much to the delight of the spectators lining Cowes Green.
Unfortunately, the wind was not quite as reliable as the sunshine and a fickle breeze and strong tide gave the navigators and tacticians a lot to think about. The first challenge was getting over the start line safely. The tide was pushing the boats onto the wrong side of the line and the light south westerly was only just sufficient for them to make way against it.  Several boats found themselves over the line as the gun went and had to make the slow and painful crawl back up tide to restart correctly.
Once underway the fleet streamed west and into a developing south-westerly sea breeze. The first few legs saw them making good progress, but as they turned back towards the central Solent a competing south-easterly sea breeze tried to fill in too and the net result was a classic Mexican stand-off between the two directions.  The resulting game of snakes and ladders was painful for some, but rewarding for others.
In Class 4 former International Moth World Champion Simon Payne, sailing his 1961 Nicholson designed Damian B found both a ladder and a snake, ironically noting, “We led by a country mile at the first mark, but then it all went wrong.  We really need more wind.”  Whilst Damian B lost out it was a pair of 1963 Kim Holman designed Stellas that showed the fleet the way.  On the line Richard Matthew’s Scorpio led John Mulcahy’s Estrella, with Rufus Gilday’s Venya, a 1939 40 square metre Spidsgatter designed by Jac M Iversen, taking third.
In Class 3 Peter Robinson’s lovely Kim Holman Rummer yawl Tinkatoo, built by Stanilands & Co of Yorkshire in 1960, never put a foot wrong.  Following them home for second was Tim Yetman’s 1924 West Solent One Design Suvretta, with Robert Veale’s 1958 David Cheverton sloop Danegeld third, and Michael Briggs’ Mikado, a 1904 Fife designed 30 Linear Rater and the oldest boat in the regatta, fourth.
Jonathan & Scilla Dyke’s Robert Clark 10 Tonner Cereste finished the race with high hopes of a second place in Class 3, but unfortunately they had touched two marks during the race and by the time the appropriate penalties had been applied they found themselves down in eighth instead. “I’ve never hit a mark before in my life and I’ve managed to hit two in one race!” Said the slightly embarrassed Jonathan after racing.
Guy O’Bierne, co-owner of Tinkertoo, was delighted with their win, “Today was an interesting day, we’ve not raced since last year, so we just threw ourselves together and went out to see what would happen. The day turned out quite well in the end, we thought we would be around mid-fleet finish!”
Giovanni Belgrano’s 1939 Laurent Giles sloop proved that she hasn’t lost her Class 2 winning ways by beating Lawrence Wride’s Sparkman & Stephens’ One Tonner of 1967 Sunmaid V into second place, with Gildas Rostain’s 1968 Olin Stephens One Tonner Volonte in third.
The racing in the metre boat classes was as tight as ever.  In the Sixes, victory went to Charlie Hatfield’s 1946 Nicholson designed Mena with Tom Richardson’s Thistle second and Robert Owen’s Valdai third.  In the Eights, Christopher Courage sailing the 1939 Alfred Milne designed Helen took the victor’s laurels from Murdoch McKillop’s Saskia, with Richard Bendy’s Osborne third.
Amongst Mena’s crew is British Double Olympic Medallist Saskia Clark who is finding the transition to big boats interesting. “I’ve retired from Olympic sailing now, and am just finding my way in the big boat world. We’re doing the 6m Worlds in Vancouver in September so this is part of our training for that. Today was our first day racing as a five, and I’m on the foredeck. We had a few little issues, things that didn’t work in terms of equipment that weren’t so smooth. With three Spanish speakers and two English speakers there’s a lot going on to get to grips with. The calmness of my Olympic 470 sailing is a distant memory now, but that’s what we’re aspiring to get to. We’re going to be calm, organised and have routines, it’s going to be good!”
Back ashore the crews took the opportunity to wind down in the sunshine as they enjoyed the post racing hospitality of the Panerai Lounge and the daily prize giving, before moving onto the Panerai British Classic Week 2017 Welcome Reception at the Royal Yacht Squadron.
Tomorrow will see the fleet take on the Around the Island Race sponsored by EFG which will start from the Royal Yacht Squadron at 08.00.  For those yachts who elect not to race around the Island there will be an inshore race starting at 10am.