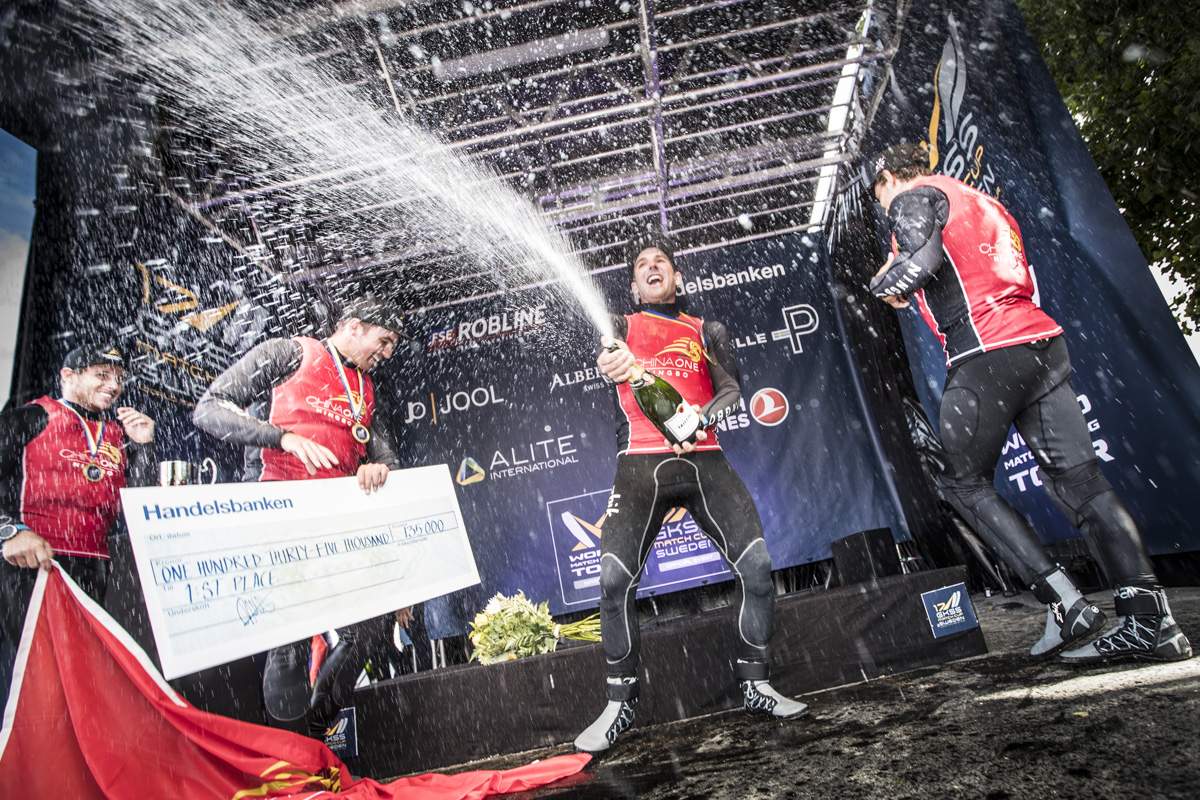 Marstrand, Sweden: After beating Pieter-Jan Postma’s Sailing Team NL in this morning’s semi-finals, Phil Robertson and his CHINAone NINGBO crew went on win the final of GKSS Match Cup Sweden, dispatching Taylor Canfield’s US One Sailing Team. This repeated the Kiwi team’s victory on the Marstrand Arena in 2016, against the same opponent, but this time with a more emphatic 3-0 scoreline.

Racing took place with the wind building into the mid-teens, causing the nimble M32 catamarans to light up. More stable conditions compared to yesterday resulted in more boundary-to-boundary racing, while picking the right marks to round was vital to ensure sailing in the best pressure.

In the first race, Robertson impressively won the start and went on to lead for the entirety of the course. In the second Canfield struck back, starting to weather of his opponent and pulling the trigger faster. However at the top mark rounding Robertson was able to get the inside berth, luffed Canfield and then to head off unchallenged to take the win.

In the decider, Robertson won the start, but Canfield had managed to draw level, crossing ahead up the beat. However on the run the overrider broke for the gennaker sheet winch on Canfield’s boat, preventing his crew from sheeting in the gennaker. This handed Robertson the eventual win and the overall GKSS Match Race Sweden title for a second year.

Robertson sailed this year with his same winning crew from 2016, comprising Kiwis Will Tiller, Stewart Dodson and Aussie James Wierzbowski. “We aren’t the most ideal set-up weight-wise – we were one of the lightest teams here, but we seemed to make it work,” Robertson said.

In today’s final, Robertson’s starting seemed in a different league. “We have trained in tight starting and it probably played into our hands a little bit. We were getting off the line pretty well and managed to keep our lead. But was close and tough – Taylor did a good job.”

Canfield and his US One Sailing Team had overcome Ian Williams and GAC Pindar team 3-1 in the semi-finals to gain their berth in the final (while Williams went on to win the Petit Final against Postma). This he had achieved in such surgical fashion that many had him as favourite for winning overall. He conceded: “I am a little disappointed. It was a really close battle and those guys sailed better than us today.

“Obviously I take a lot of the blame. We can call three or four mistakes which cost us the regatta. There were a few boat handling errors, but nothing major. It is more about getting all of the moves perfect.”

As to GKSS Match Cup Sweden, both finalists paid tribute: “This is no doubt the best event we do. It has been that way for the 23 years it’s been running. This is a fantastic location and a great crowd,” said Robertson. Canfield concurred: “I have been coming here six or seven years and finished on the podium four or five times. It would be nice to win it one day! Obviously it is an incredible event. Marstrand turns it on. It is one of our favourite events and everyone in Sweden seems to care about the sailing.”

Håkan Svensson, CEO and Owner of Aston Harald, builder of the M32 catamarans and owner of the World Match Racing Tour, concluded: “It has been an interesting week: We had a rough start with a lot of wind and then we had a postponement when we started the next day, then a couple of really good days and yesterday, a bit slow. It shows what a wide range the M32 has – from three knots to thirty – and that the boat is the right one for what we’re doing.”

As to the winner, Svensson added: “Phil has done an extremely good regatta, bringing on some manoeuvres that most of us are just envious about.”

The M32s are now staying in Marstrand ready for next week’s World Championship fleet racing when 17 of the one design catamarans will be competing on Marstrand Fjord.