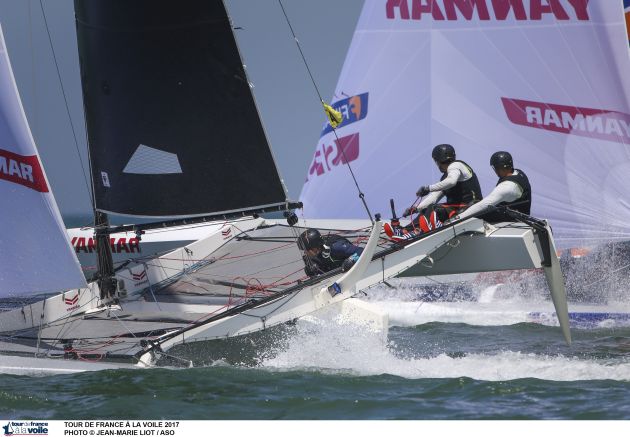 French 470 Olympian Sofian Bouvet and the Team SFS crew laid down a clear marker to the 28 other Tour de France à la Voile teams that the Mediterranean based outfit can already be considered serious title contenders to win the 40th anniversary edition.

Despite this being their first ever attempt as a team at the annual three week, nine venue Tour, they completed the perfect Dunkirk Double today. After winning Friday’s 16 nautical mile coastal race in light breezes Bouvet and his team of Olympic class sailors complemented by two experienced Tour hands, added maximum points for triumphing in today’s first eight boat Super Final.

Former 470 helm Bouvet commented “We did not expect to win both the Coastal Race and then the Stadium Races here in Dunkirk. It’s a great surprise! We savour these wins for what they are but we also know that the competition is just started, the road is still long. Many favorites have stuggled today and that is precisely what we want to avoid. It can happen to anyone, any time. Sometimes you have to be a bit cautious at the start and build to take places. But these are little wins, not by much. But it is important to keep on doing it like that.”

In the Final they started strongly but read the strong current and the breeze better on the first longer beat, to overhaul early leaders Fondation FDJ Des Pieds et Des Mains and Trésors de Tahiti, (Teva Plichart). On a thrilling final run they were crossed by Fondation FDJ but when they came back on the right of way starboard gybe they were ahead and able to hold on to complete their dream start.

The well resourced Team SFS Diam 24 programme was set up last year and complements the Volvo 70 programme run since 2014 by Lionel Péan, the first French skipper to win the Whitbread Round the World Race in 1986. Winners of the French national championships, the Grand Prix de La Grande Motte and second in June’s Normandy Grand Prix, the crew shows similar hallmarks to the winning ways of Spindrift racing, victors in 2015 and the young Team Lorina Limonade-Golfe de Morbihan who won convincingly in 2016.

If the Team SFS’ start to their debut Tour is something of a dream, for Quentin Delapierre and Matthieu Salomon’s Team Lorina Limonade-Golfe de Morbihan crew who are holders of the title, their first days in Dunkirk have been a sharp contrast to last year’s sparkling launch here.

After breaking their tiller in the coastal race Friday, fighting up to ninth from 17th, today they were BFD in the first race. Hitting the all-women Helvetica Purple they holed the inside of their port hull and had to return quickly to the beach where, in a hugely sporting show of solidarity and support from other teams, the damaged hull was replaced in record time. Scored Did Not Enter for two races managing to return for a second place in the fourth heat of the day.

Helvetica Purple’s Sophonie Affagard was injured in the collision, sustaining a dislocated shoulder. She is reported to have been released from hospital after treatment.

A lack of practice in the Stadium discipline did not seem to hurt Spain’s New Territories team. A truly multicultural crew including the Russian boat owner, Portuguese helm Hugo Rocha was delighted to make it into the eight boat Super Final at their first ever attempt. After a BFD in their first race they went 3,2,7 to book a berth in the finale on countback. Sixth in the final New Territories lie 10th overall.

“It was incredible. We are so happy. We had such a difficult start to the event, having to paint the mainsail and put stickers on the boat very late. We are very tired and so today is very important to make the team happy. We started well and seemed to be able to go fast. But we have a long way to go on our boat handling. But it is a big surprise to us today. We have only sailed a few days in this boat but it is hugely encouraging.” Said Portuguese Olympic bronze medallist Rocha, a world champion in the SB20 and J/80 Sportsboat classes with this same core crew.

For Stevie Morrison, Thierry Douillard and the Oman Sail crew, the chance to complement their Coastal Race fifth place with another top result eluded them as a result of an unexpected penalty on the last leg of their first race, followed by a BFD in the second race – an unfortunate result of a miscommunication of the final countdown. But Oman Sail go forward to Fécamp tomorrow in sixth place overall.

“It was very frustrating.” Recalled Morrison, “We got a penalty when another boat unexpectedly match raced us. They went from fourth to sixth. They could have tacked and got fourth and we would have been fifth. I had a bit of a lack of anticipation what they were doing.  You need to be more aware of that when you are up against teams who might not normally be up near the front of the fleet. And the second one was just miscommunication at the start. I thought I heard seven and we deployed, next I heard eight and we were just too early! We were confident in our starting which is good. It is hugely frustrating with only four instead of six races today, being only a couple of points from being in the final. If you make it to the final everything resets to zero.”

The record 29 team entry for the Tour Voile means bigger and more competitive qualifying heats, placing even more pressure on the start line, especially the need to win the favoured spot on the line, going fast with the optimum route to the first buoy.

The dreaded Black Flag, instant disqualification for being on the wrong side of the start line during one minute before the gun, summarily penalised many offenders, including the defending 2016 Tour Voile champions Lorina Limonade-Golfe de Morbihan in the first race. The popular Aurélien Ducroz, double world champion freeride skier who finished fourth overall last year with his Coved-Paprec team, was BFD twice from four starts, as also scuttled the hopes of the local Dunkirk team Dunkerque Voile.  After that useful fifth in the Coastal Race Friday OmanSail hobbled themselves with a BFD in the second of their four qualifying heats. Hugo Rocha and the New Territories crew, , were able to compensate for their BFD aberration in the first race by sailing 3,2,7 from their next three races to squeak into their first eight boat Super Final of the Tour Voile.