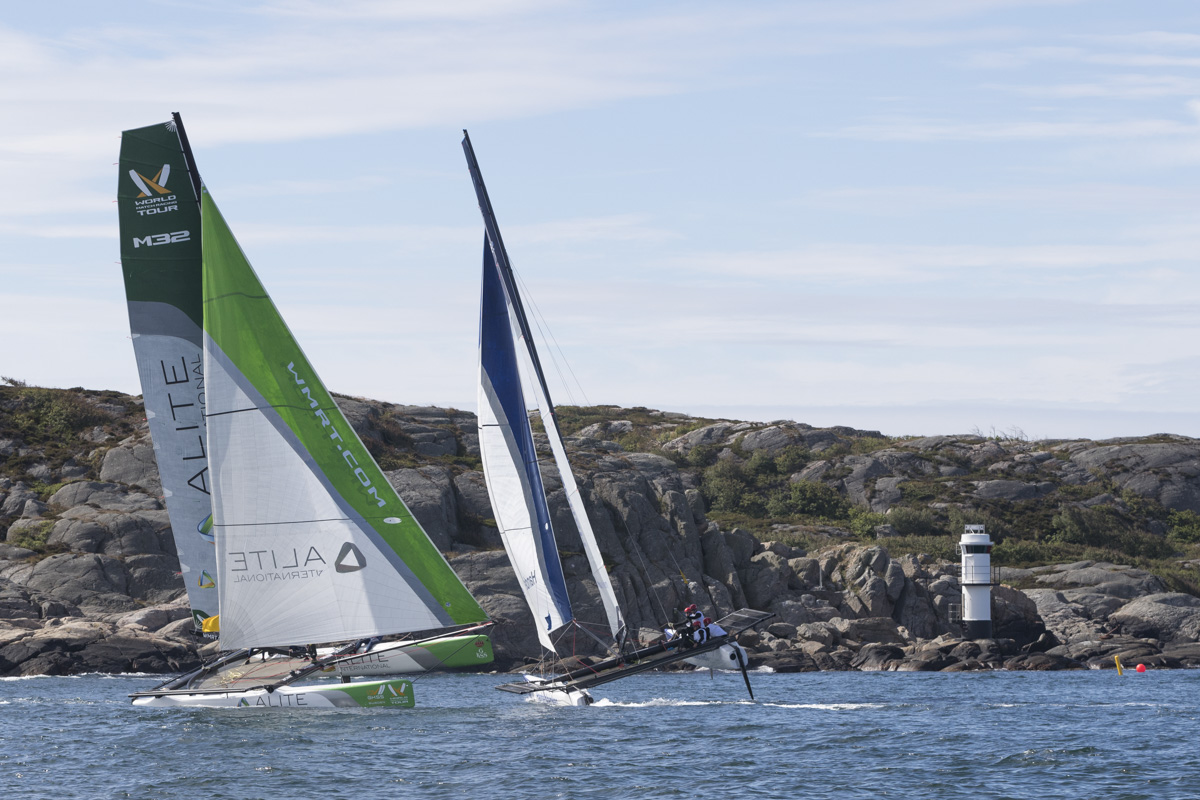 Marstrand, Sweden: Light winds on Sweden’s Marstrand Arena demonstrated how versatile the one design M32 catamaran can be, providing good close racing in the lightest winds, with the Quarter Finals all decided and the giant spectator turn-out not left disappointed.

As GKSS Match Cup Sweden’s defending champion Phil Robertson put it: “To be honest they are the nicest boat to sail in these conditions because they are super light, have curved foils and you aren’t dragging anything around under the boat.”

With the courses shortened to four legs, Canfield got off to the better start claiming the first two matches, even winning from behind in the first. But the young Australian fought back impressively, levelling the score 2-2.

After a long wait for the breeze to settle the decider saw Gilmour win the start. Canfield forced a dial-down on the upwind and then, after tacking beneath Gilmour coming into the top mark, forced a dial-up. Gilmour tacked away and found some extra pressure to power away, only to throw it away with a course boundary infringement.

Canfield was then able to ‘engage’ just metres from the finish. “It was always going to be a close cross coming back together,” he said. Canfield dialled Gilmour up, causing them to be penalised for a minor collision. From there Canfield peeled away and sailed on to the finish unchallenged, turning the tables.

There were minor palpitations when British six-time World Match Racing Tour champion Ian Williams and his GAC Pindar team were beaten in their first race by France’s Yann Guichard and his Spindrift Racing team who had read the upwind leg better.

However, from there Williams was not to be beaten and converted winning all three starts (despite being OCS in the final one) into victories, winning his series 3-1. “It is great to qualify through against Yann Guichard. He is always a tough competition,” said Williams.

Of today’s conditions, Williams said it played to the guile and experience of the ‘older’ teams. “At times it was a bit like the old days going around in 5-6 knots! But you deal with what you’ve got. A lot is down to how you sail the boat – tacking with a gennaker is hard, knowing what angles to sail upwind, and the pressure and current differences – it is easy to make mistakes.”

The remaining two matches both went 2-0. The Kiwi derby saw defending champion Phil Robertson and his CHINAone NINGBO crew out manoeuvred Chris Steele’s 36 Below Racing. Having won the first race in the start, in the second Steele turned the tables and was looking strong until the upwind.

As Robertson explained: “We identified before the race that we wanted the right turn at the bottom (looking upwind) and Chris chose the right turn. Then we managed to find pressure and take the lead back off him.”

An incident at the top mark then sealed the deal for Robertson. “We were a little under layline so the boat stopped dead and we had to tack again. Fortunately the rules worked in our favour and we rolled over him and got around the mark.”

Sadly the last Swede in the competition, Nicklas Dackhammar and ESSIQ Racing, was eliminated by Dutch former Olympic Finn sailor Pieter-Jan Postma and his Sailing Team NL. Postma left his opponent tied up in both starts going on to win 2-0, in a series that was shortened due to the lightening breeze.

Postma observed: “It was very light today and our team is at the heavier end. Dackhammar’s team have good boat handling, good speed, good sailors and are local favourites.”

The Dutchman was also pleased to be the sole new boy among the four semi-finalists – all old match racing hands. “I am super stoked. It is amazing to be here.”

Tomorrow’s semi-finals and finals of GKSS Match Cup Sweden are forecast to be held in more wind than today and can be viewed live at 14:00.