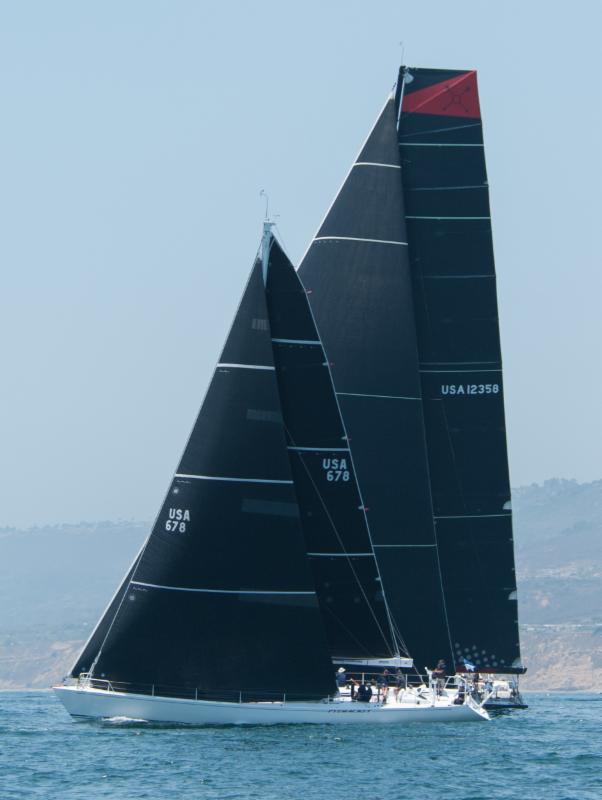 LOS ANGELES, CA – Another perfect Southern California summer day yielded perfect conditions for the final wave of 17 fast monohulls and five fast multihulls to set off on their 2225-mile odyssey to the finish in Honolulu of the 2017 Transpac Race. The breeze started at a light 6-8 knots but quickly built up to 10-12 knots after the start, allowing the fleet to speed towards their first – and only – mark of the course at the West End of Catalina.

In this 49th edition of this classic biennial ocean race there is a healthy mix of sentimental favorites – such as Bill Lee's 68-foot Merlin, a boat of his design and build who made its debut exactly 40 years ago to set a course record then and re-write ocean racing design on the West Coast and beyond – and the newest generation record-breakers, such as Jim Clark's 100-footer Comanche. Both were out at the start today, Lee with some of his original 1977 crew, such as Jack Halterman who like Lee is an integral part of Santa Cruz racing history.

“I've know Bill for really long time,” said Halterman, who has been active for decades as a big boat pro sailor. “I'm doing less sailing now and more triathlons, but am really looking forward to going on this race. I can't believe this is my 18th trip to Hawaii.”

On board Merlin at the helm at the start is a current-generation pro sailor at the prime of his game, Morgan Larson, another product of the Santa Cruz scene.

“My dad was supposed to come up from New Zealand to do the race, but opted not to and asked that I take his place. It's a honor to be on such a legendary boat, I'm looking forward to this.”

Larson driving Merlin nailed the start at the pin end, well away from Commanche being driven by Ken Read who opted to start closer to Warrior, the LAYC starting vessel, among a crowd of ULDB Sleds which were dwarfed by the size of the big red and black all-carbon rocket ship. Until the advent of the TP 52 design over a decade ago – another design innovation born here on the West Coast – the ULDB sleds and their turbo-charged offspring set the first to finish standards for this race.

Now Comanche is hopeful to have the weather patterns needed to break the existing monohull course record for boats using stored power of 5 days, 14 hours, 36 minutes, 20 seconds, set in 2009 by Neville Crichton's Reichel/Pugh 90 Alfa Romeo II. Navigator Stan Honey, a multiple Transpac winner himself, reckons the odds are 50-50, better than his prediction yesterday based on new forecast information. Comanche rocketed off the line at speeds matching or maybe even exceeding windspeed with an enormous masthead furling headsail.

Among the fast multihulls, the MOD 70's Phaedo and Maserati were initially being shown the way west by the smaller ORMA 60 Mighty Merloe who was ahead of them in the first leg to Catalina.

Unfortunately for Phaedo, who is Lloyd Tornburg's MOD 70 project now in search of a race record to match their course record set in May, a key member of his team had to stay ashore in this morning's dock-out from Rainbow Harbor in Long Beach: Brian Thompson fell off the boat last night and broke his leg in two places, so he will have to enjoy the race online while in recovery from this unfortunate injury. Heal fast Brian.

From out on the race course already reports are being sent in, like this one from Deception, Bill Helvestine's SC 50, who started yesterday in Division 4. The report reads (in part): “Two of our crew have succumbed to the vomit comet – which is not bad compared to previous races. But…there's something smeared along the leeward rail… Now that the sun is out spirits are starting to rise. We're beginning to actually get some sleep and the bilges are getting sponged dry on a regular basis. We're frequently cracking 9's on the speedo and we're happy with our sail selection – which is damned good because we didn't bring much in the way of upwind sails to choose from.

“Once in a while someone pops up on AIS and we still think we're looking good. We haven't seen the position reports yet but fingers crossed we're still in this race.

“For those noting that we're sailing under a JPN flag on the tracker. We like to say it's “Deception” baby, but in reality someone screwed up on the data entry. If anyone in the race committee is reading this, I think Bill would appreciate that it gets changed.

“Deception, over and out.”

Breaking news from the course is that Mark Dowdy's SC 50 Hana Ho has contacted the Race Committee and announced engine problems have forced them to retire from the race and head back to the coast after one day of sailing.