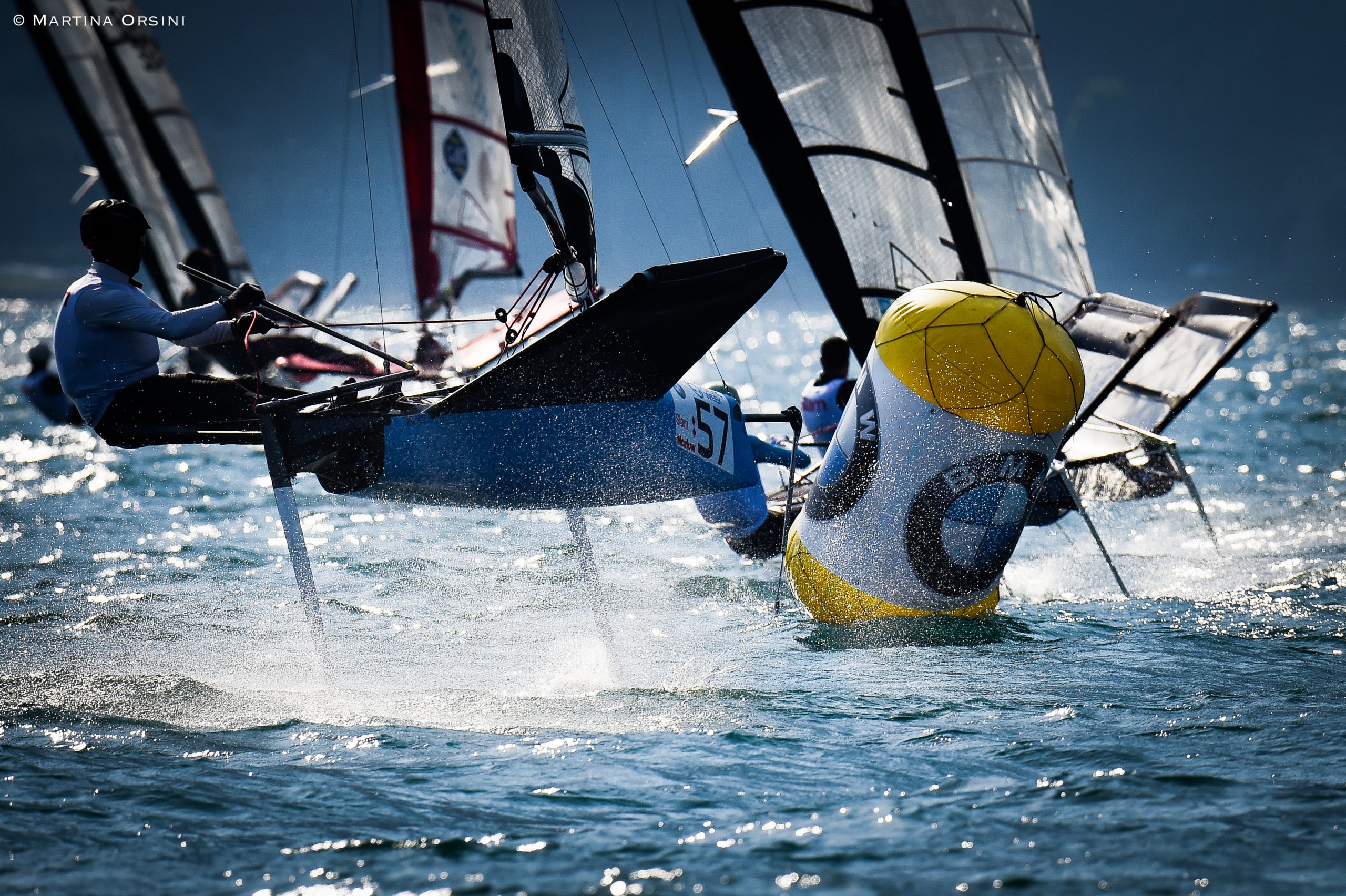 Lake Garda was a mass of foilers for another steamy hot day at Foiling Week 2017 and by midday 12 knots was the sweet spot for all boats tuning up for the Downwind Dash.

On the water entry level foilers were again getting up as first time riders. As the breeze tapered during the afternoon, the most impressive result was that the production foilers were still able to foil in 6-7 knots of breeze. All the foil technology is getting better for lower wind ranges which helped the smaller sailors, kids and females.

The Downwind Dash consisted of a 10 km race starting off Assienza just south of Malcesine on the East side of Lake Garda and finishing in front of a crowd watching right in front of Fraglia Vela Malcesine, host club of Foiling Week Garda.

Around 30 craft contested the Downwind Dash, a mixture of kite boards, Flying Phantoms, A Class cats, S9’s, Moths and a whole range of prototypes.

The race started in a faint southerly breeze which fluttered between 6 and 10 knots with big holes around the lake. The kites immediately broke away, able to foil much lower angles and remain on their foils. Most of the fleet got caught in patches of no breeze dropping off the foils and getting stranded in pods around the lake shore.

In the multihulls, the Flying Phantoms enjoyed an early dog fight between the lead two Real Stone boats from Switzerland skippered by Bruno Barbarin and Robin Maeder. The two cats sailed in tandem until confusion about the race finish line allowed Robin Maeer to get the jump to finish first of the foiling cats.

Bruno & Cedric summarise their race: “The wind for the race was very patchy and light but we had a good start and after we were very fast reaching just behind the Moth, but the other Flying Phantom (Robin Maeder & Jank Roempp) had a little problem with the spinnaker, so we got a bit more advanced, but we couldn’t find the finish line, so we missed it and gave them the win.

“I think the holes in the breeze around the lake made the difference between us and the Moths. They are good in the transition in the light winds.

“Lake Garda is quite different from lake sailing in Switzerland, it is flat water, but we have more wind here and it is more stable. We train a lot and we also improve the boat speed and flight so we like sailing here. We have very close racing in the Flying Phantom series and we would like to make Foiling Week Garda part of our series.”

Foiling Dinghy Expo
An exhibition of foiling dinghies (Whisper, F101, iFly 15 and Waszp, lined the shore of the Fraglia Vela Malcesine with their designers and representatives on hand to give guided tours of the craft. Trial sailing continued afloat with the lighter conditions again proving more suitable to learning foilers.

Julius Hornung test sailed the iFly 15: “Looking at the bare hull and what you saw on the dock it looked a bit clunky and stubby but I was quite surprised when I got on the water it was very light footed, very fast and really easy to get on the foils even with two people on board. I sailed for a while with a trainer then took over singlehanded.

“The boat really accelerated and compared with a foiling mono it delivered a much more intense experience mainly because you are trapezing, you are hiked further out and riding a lot higher up. The four foil tips make the boat really stable and responsive. You can easily de-power the main and remain foiling in a gust.

“It does exactly what you want it to do. At one point we tried a foiling gybe, but I couldn’t get off the wire so the boat slammed down but because of the chunky hulls I didn’t nose dive or capsize.”