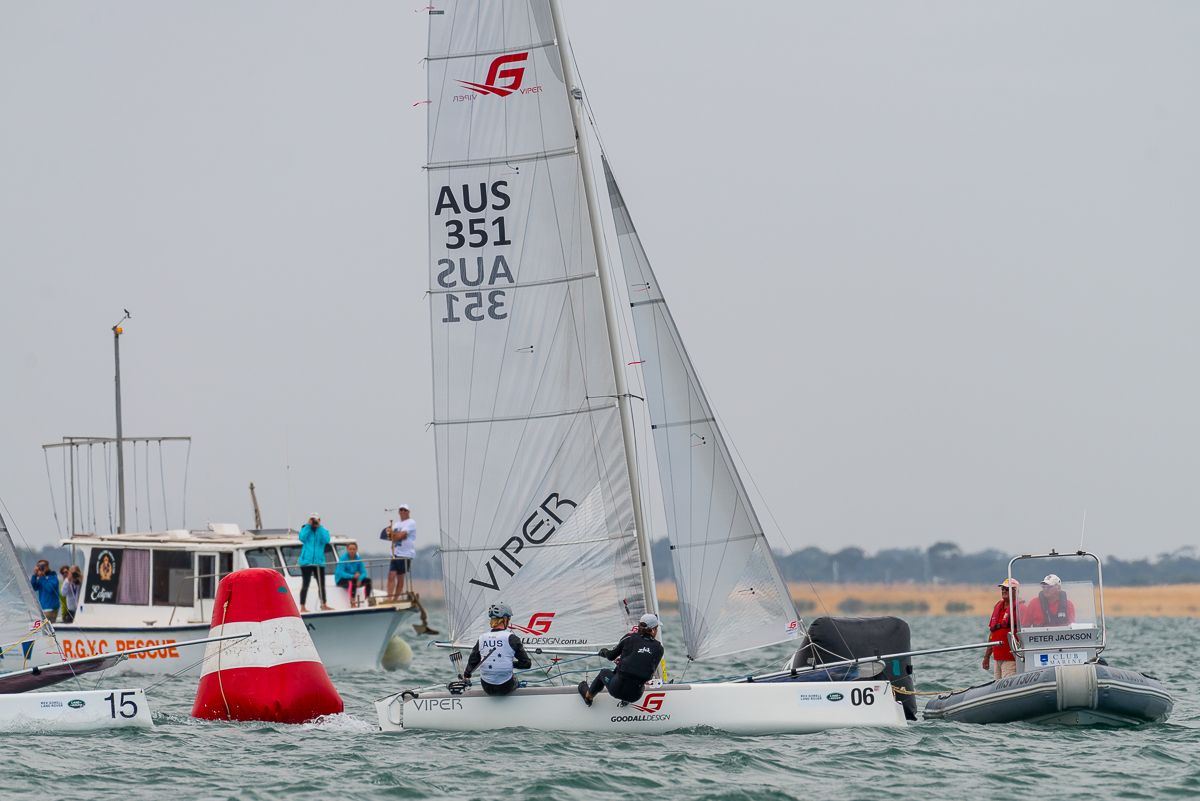 Winners of the opening two races of the Viper Worlds 2017, Jack Felsenthal and Shaun Connor, shrugged off the fact they both finished different regattas in Adelaide on Sunday and found enough mojo out on Geelong’s Corio Bay to commence their world championship series the next day, and send the international field a strong message.

Back at the host club Royal Geelong Yacht Club after two races on Monday January 9, 2017, the first in 6 knot easterlies and the second in a fading 12 sou’east seabreeze, Felsenthal said, “It was a good day. We didn’t know how we’d go first-up jumping on the boat straight off a few days of racing in Adelaide.

“We had a good start in the first race and went the ride side and in the second race we had another good start. It was really close racing and upwind was really tight and tricky. We picked it well and were able to climb over the top of the lead boat on the last beat.”

Shaun Connor travelled to Geelong from his 49er nationals at Adelaide’s outer harbour and Felsenthal from his 420 nationals at Brighton & Seacliff Yacht Club and both arrived into Geelong the night before the Viper Worlds’ opening day.  “We had a little speed pack up yesterday at different ends of Adelaide and flew across late last night,” Connor said. Jack’s father Brook arranged their registration and had their Viper called Charter World ready for their rock star arrival.

The talented pair reckon they were operating at less than 50% out on Corio Bay on Monday, in terms of energy levels. Even worse news for the other 21 teams is the fact they have only sailed the Viper together for four days since Easter 2016, their very first regatta together.

On the competition Felsenthal says it’s fantastic to have the French world champion Emmanuel Le Chapelier and his crew Tho Constance plus the Van Kerckhof brothers from Newcastle, who have been top of the class tree on a world scale for some years, as the benchmark among the starters.

Daniel and Nathan Van Kerckhof (Send It Marine) posted a second and fourth to be second overall and third is Le Chapelier and Constance with SailingTeamCatamaran.

An upper wind limit of a consistent 22.5 knots exists for the Viper catamaran.
The Viper comes under the F16 umbrella and attracts a lot of youth, especially internationally, as a pathway to the only multihull class at the Olympic Games, the Nacra 17, which made its Olympic debut in Rio in August. The Viper Worlds 2017 at Geelong is the class’ first major event outside the Northern Hemisphere.