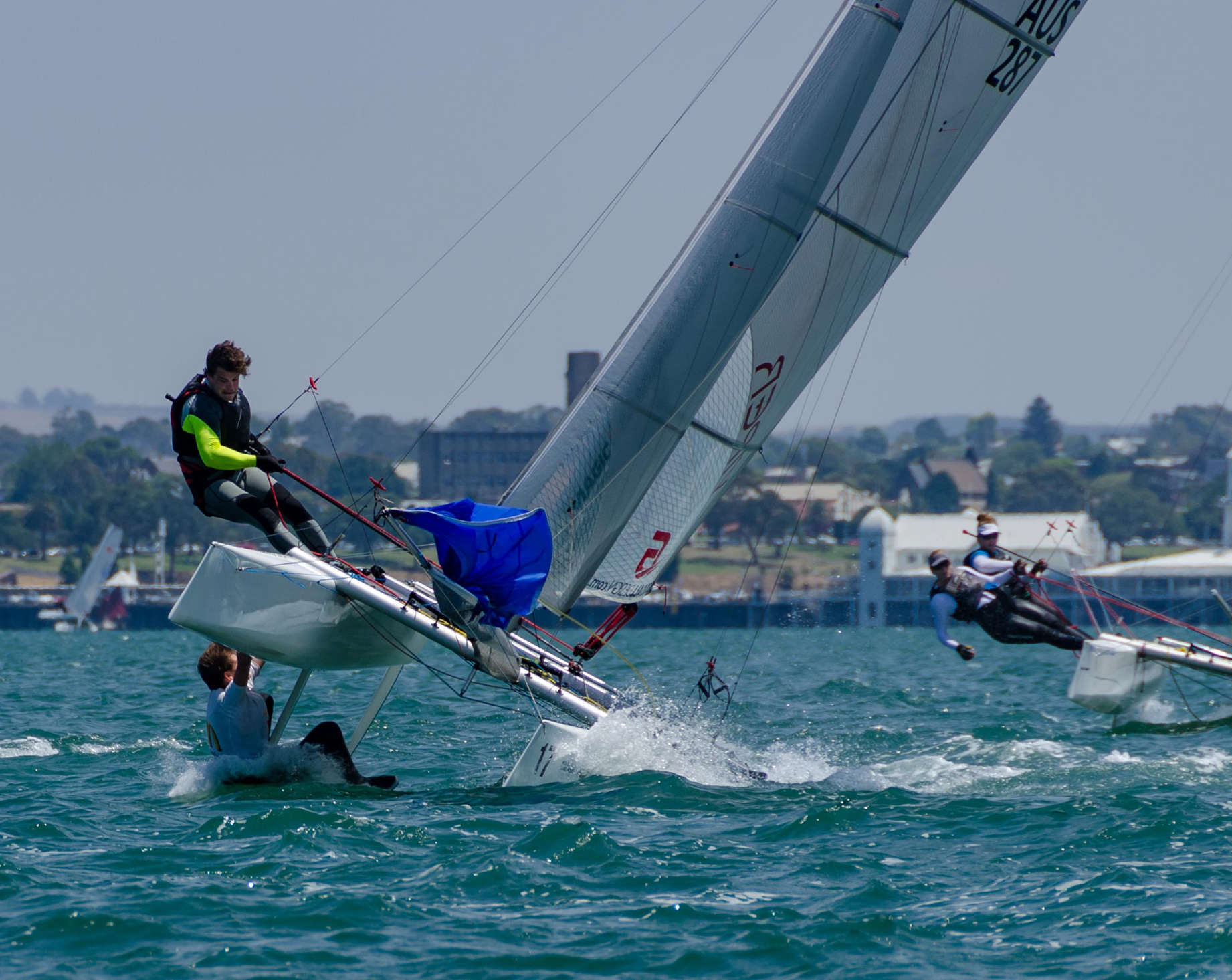 Jack Felsenthal and Shaun Connor continued their Viper Worlds 2017 dominance with two more triumphs on a picture-perfect Corio Bay, but on the war path are the current Australian Viper champions Daniel and Nathan Van Kerckhof, the only team to take a win off the lead pair so far.

Monday’s gloominess and light winds shifted to summer sunshine and sea breezes 14-17 gusting to 19 knots by the time race 5 got underway in Stingaree Bay on Corio Bay’s eastern shore on Tuesday January 10, 2017. The Viper catamarans shifted into fifth gear and the ideal sailing day became about boat handling, crew work and plenty of saltwater in the eyes.

“We haven’t done much sailing over 12 months, we feel like we’ve been operating around 50% and today we started to hit our straps,” said Dan, who skippers. “As the day went on our racing became cleaner and in the second race we really pushed Jack quite hard. The boat handling really came up a notch today and our confidence and cause too, we are starting to pick better lanes.

“Tomorrow the forecast is good for us, we are on the heavier side and we know how to muscle the boat around, and where we sail (Port Stephens) is quite rough. If it blows we’ll be happy to have a dig and not let Jack get his way too easy,” Dan added.

In 2012 the current Australian champions and class good guys established their own mentoring program called Send It Marine, also the name of their Viper. “We started Send It Marine to pass down some of our knowledge to the youth guys, to show support and make it easier for them,” Nathan explained.

Third in the pointscore, three points off second, is Tayla Rietman and Lachlan White sailing Thanks Again Dad and fourth is the French world champion Emmanuel Le Chapelier and his crew Tho Constance. Rietman and White plan to step up to a Nacra 17 this year and spend time overseas competing on the European circuit.

Laurent Verbeek’s young crewmate Stef Haazen is quieter and less smiley than usual this afternoon after seeking medical attention for a split lip that required stitches, the result of a fall overboard at the top mark in the first race of the day. The Belgium team plan to return to the racetrack tomorrow with Catacare.be and Haazen will be wearing a mouth guard to protect his stitches.

Noticeably more than in other high-performance classes are Viper crews at the Australian Viper Worlds who are father/son, partner and sibling combinations, either sailing alongside or against each other.

A lot of discussion over the years around the kitchen table about boat using the salt shaker as the top mark has evolved into a long-term sailing partnership for Gary and his 32 year-old son Ross Purcell from Sugarloaf Reservoir, North Melbourne.

Gary is one of the senior skippers at the Viper Worlds and on the experience of sailing with his son for the past 12 years he said, “Unless you have a bloody good crew you are a nothing. The feeling in your guts when you are operating at your end of the boat, knowing your crew is doing at the front what you expect. When you slam it through a tack and your crew is already out on the wire….”

Ross would love a top ten finish though he’s realistic given the international field, “We aren’t up against a bunch of slouches; you don’t underestimate the opposition.”

Competitors have a third consecutive day of racing out of Royal Geelong Yacht Club on Wednesday January 11 before a layday on Thursday. Racing in the Viper Worlds presented by Rex Gorell Land Rover resumes Friday January 13 until Sunday January 15.