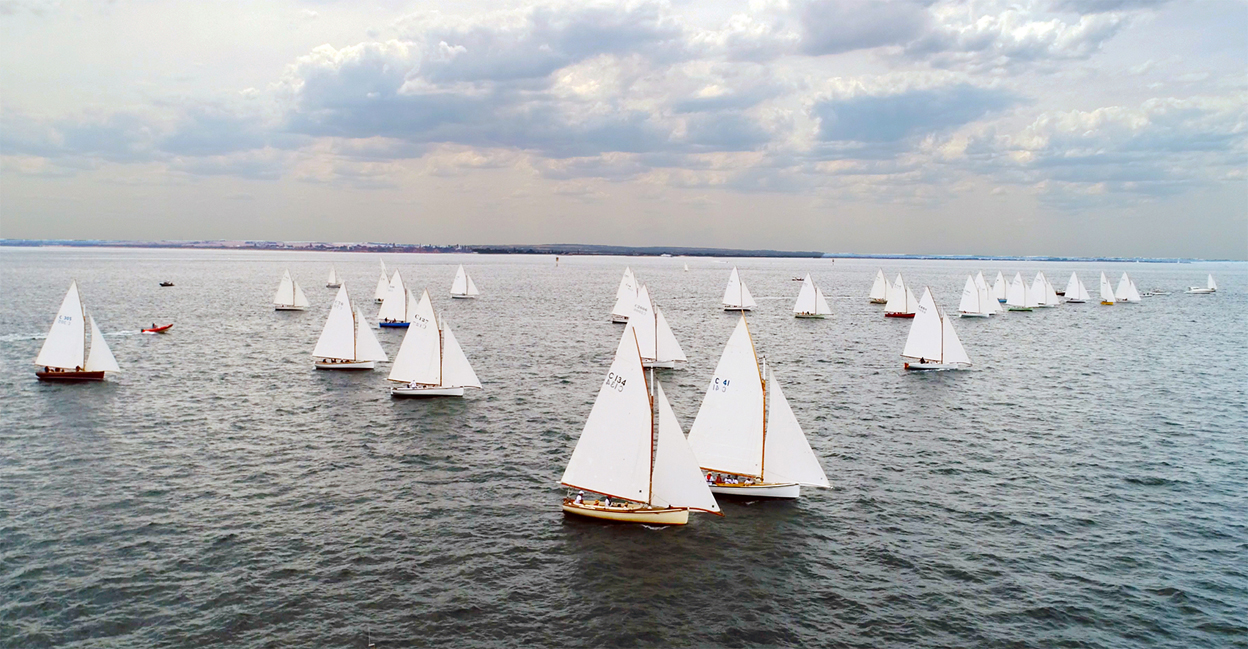 The man responsible for the resurrection of the vintage car of the sailing world, the Couta Boats, raced his own 100 year-old Muriel to a handicap win in Saturday’s 35th Gant Portsea Cup hosted by the Sorrento Sailing Couta Boat Club.

Light and fickle eight knot easterly breezes off Portsea’s Quarantine Station on Victoria’s Mornington Peninsula separated the 45-strong fleet early on and made for leisurely and sometimes frustrating progress, which in turn set up a second weather challenge – an outgoing tide that cost some the chance to record a finish time.

“We were racing all the other competitors but the greatest competitor was the tide,” Phillips said. “The Sydney boys reckon it’s like sailing in a river entrance, and they are probably right.”

The laid triangle course race of 7 nautical miles is the event of the year for the popular Couta Boat class. It’s the day most owners prepare methodically for and bring their best crew combinations to, from Olympic gold medallists, around-the-world yachties and Sydney Hobart winners to everyday sailors.

Class president James Mighell said afterwards, “The Portsea Cup is our big annual race and tends to attract very good sailors sprinkled across the front end of the fleet. Handicaps get tweaked with loadings in the morning, depending on which hot sailors are on which boats. The strong ebb tide added another dimension this year.”

Also belying the class’ old school façade is the ultra-modern practice of on-water umpiring, which sorts out infringements as they occur rather than later in the protest room, and keeps things very gentlemanly. Chief umpire Ben Fels and his colleagues handed out three penalties during the 2017 Portsea Cup, two of which involved Muriel and David Currie’s Bella, the latest Couta Boat to be built to an original design by Tim Phillips’ Wooden Boat Shop at Sorrento. The penalty tally was one apiece.

Phillips is only the third owner of Muriel, his custodianship spanning 30 years, and before him Andy Johansen’s ownership stretched a lifetime – 65 years. Phillips knows the story of the boat’s launch well: “The date was March 5, 1917 and the original owner Gus Johnson thought he might have to choose between the birth of his son and celebrating his new pride and joy’s first taste of saltwater, but he managed to attend the birth of the lad in the morning and the launch in the afternoon.

“They were the bitter and divided years. It was a pretty thin time and there must have been a lot of misery in the papers about WWI and the deaths on the Somme. They were dark days in Australia when Muriel was built and launched,” Phillips reminisced.

“She’s a lovely old boat and with a fifth over the line on Saturday we like to think we are competitive for line honours as well. We had a good team on for the Portsea Cup including Robert Clifford of Incat fame, Chris Maxted who was on Perpetual Loyal for the Sydney to Hobart and David Ham, a very good Flying Dutchman sailor.”

Phillips is one of the Victorian owners committed to trucking his boat to Sydney in October for the class’ first nationals to be held outside the state, and he’s hoping for a combined Sydney/Melbourne fleet of 30.

Second in division 2 on Saturday January 7, 2016 was Colin Mitchell’s Rhapsody and third went to Bernard O’Hanlon’s Mystify which pulled off a daring port tack start, executed perfectly until a right wind shift foiled the skipper’s plan to cross in front of all the starboard tackers and steal the early lead.

Rhys Tucker kept his focus and gained enough speed advantage with Morning Star in the last leg to wrap up the division 2 win, beating Mal Bamford’s Harriet and Graham Cunningham’s Fiona on corrected time. “You have to keep concentrating right until the end,” Tucker said. He skippered his father’s Couta and beat his dad, who was crewing on board Joan, to the finish line by a place and three places on handicap.