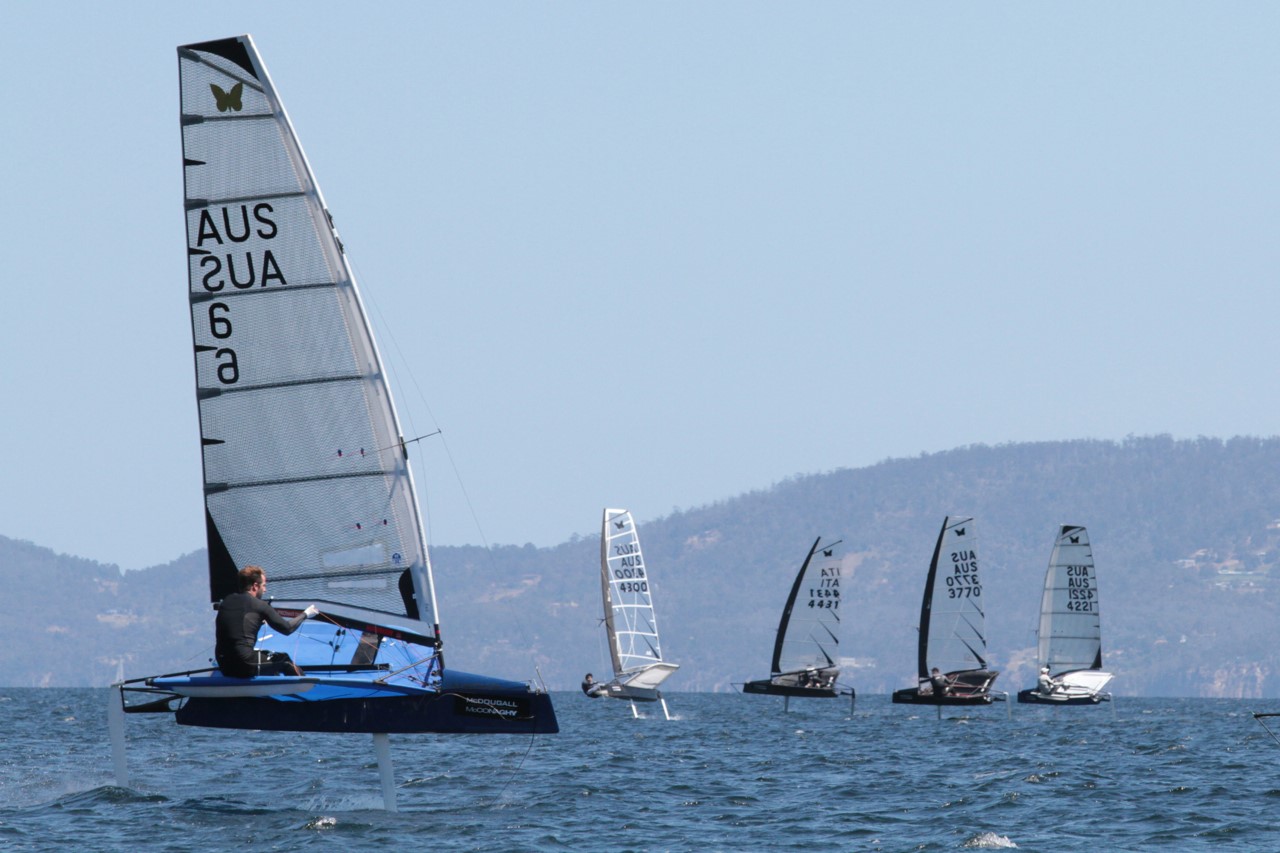 Josh McKnight has won the 2017 International Moith Australian championship with a day and three races to spare. Photo Pete Harmsen.

Three more straight wins yesterday clinched victory for the Sydney sailor, giving him 11 wins and a third place in 12 races after the penultimate day of racing.

Three races remain to be sailed today and McKnight is unbeatable even if he declines to compete today, the Royal Yacht Club of Tasmania’s International Race Officer Nick Hutton confirmed last evening.

“All competitors can discard their worst three races, so McKnight could use three DNS (did not start) races tomorrow as his discards and still win,” Hutton explained. “So far his discards are a first place and a third.”

Today’s races will decide the minor placings for the Moth nationals with Victorian Harry Mighell currently second with a net 24 points (after two discards) and Tasmanian veteran Rob Gough third on 33 points.

The duel between Mighell and Gough is intense, with Mighell scoring two seconds, and a discard 15th yesterday while Gough continued his consistency with a 4-3-4. The world masters champion has only once finished worse than fourth in the 12 races so far.

Fellow Tasmanian and RYCT member Julian Salter finished second in race 10 yesterday, following this with a 10th (discard) and a sixth.  He is seventh overall in the 31 boat fleet.

The foiler Mach2 Moths have been blessed with ‘champagne’ sailing conditions throughout the week, although yesterday’s racing was tricky and extended as race officers coped with the tricky westerly influence in the breeze.

Racing began in 18-21 knot WNW breeze, with gusts of 32 knots and choppy waters causing many a sailor to fall off his boat.  By mid-afternoon the breeze had backed to the West and easing to 13-14 knots.

Today’s forecast is for racing to be in steady sea breeze summer sea breeze on the River Derwent.
– Peter Campbell