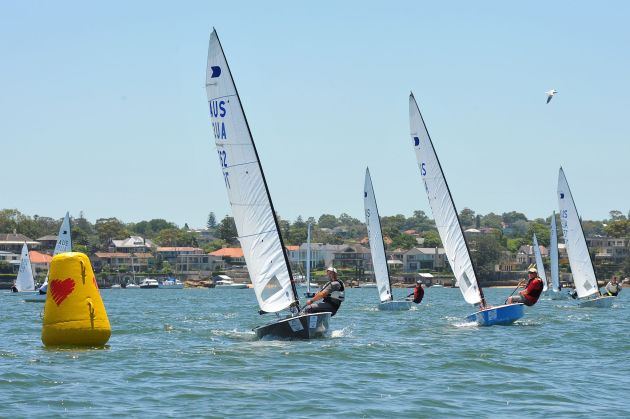 Peter Horne has taken out the opening race and finished second in Race 2 of the Henning Harders 55th OK Dinghy Nationals to take an early lead in the event hosted by Drummoyne Sailing Club where he is a member.

Horne, a pre-event favourite with his ‘Another Crack’ has started his campaign well. Meanwhile, Wangi Wangi Sailing Club’s Tim Davies won Race 2 and finished sixth in Race 1, leaving him second overall, but on equal seven points with fellow Wangi Wangi sailor, Mark Skelton and 2009 champion Andrea Blasse – all among the favourites coming into the Championship.

“It was tight in the first race – five of us rounded the top mark close together,” Horne said. “Then Andre (Blasse) got a bit of a lead and Tim was up there too with Mark Jackson and Mark Skelton,” he said.

Horne and Jackson were close in both races, according to Davies: “But Peter and I got the early jump in the second race,” he said.

Horne added: “I led the second race, but Tim caught and passed me on the square run.”

The 2009 Australian champion, Andre Blasse from Black Rock Yacht Club in Victoria, is sitting fourth overall, despite a lay off from sailing due to a shoulder injury and subsequent operation. Prior to racing this morning, Blasse was insistent, “I’m not in form, although my shoulder’s healed. I’m just out there to make up the numbers,” he maintained. Obviously not.

Defending champion, Mark Jackson, a fellow club member of Blasse’s is in seventh place after finishing fourth and 12th today – but there are still eight races in the offing and Jackson has won the title for the past five years.

“He probably got caught in a pack in the second race, and once you’re there, it’s hard to get out in these conditions,” Davies said.

Both Peter Horne and Tim Davies admitted they were pleased to have the early jump on the fleet, in particular Jackson.

“It’s definitely nice to have a little lead over Mark Jackson,” said Horne. “Local knowledge definitely helped – today. But I think he’ll be there at the end of the regatta, because he’s very consistent – hardly does a thing wrong,” he said.

Davies agreed: “It’s lovely to have an early jump on Mark. It’s good to have a couple of good results in the bag. I have to try to hold on now. Consistency will be the key at the end of the week.”

Lovely summer conditions with moderate 7-11 knot breezes flicking between east, east nor’ east and north-east on the triangle windward return race. There was little opportunity of passing lanes on the downwind legs today.

Elizabeth Williams, the only female in the fleet, is holding her own against the blokes. The Sandgate Sailing Club (Qld) sailor is 19th overall from 36 competitors, her best place 12th in Race 1.

Representing the host club, James Pagett is the youngest in the Championship at 17 and is also holding up against his seniors, in 29th overall.

Mike Walker (DSC) and Jim Ley (Woollahra Sailing Club) are glowing evidence of how the more mature age can keep fit and stay young. Both in their 70’s, the pair remain competitive in this single person class – a great advertisement for sailing and those they compete against.