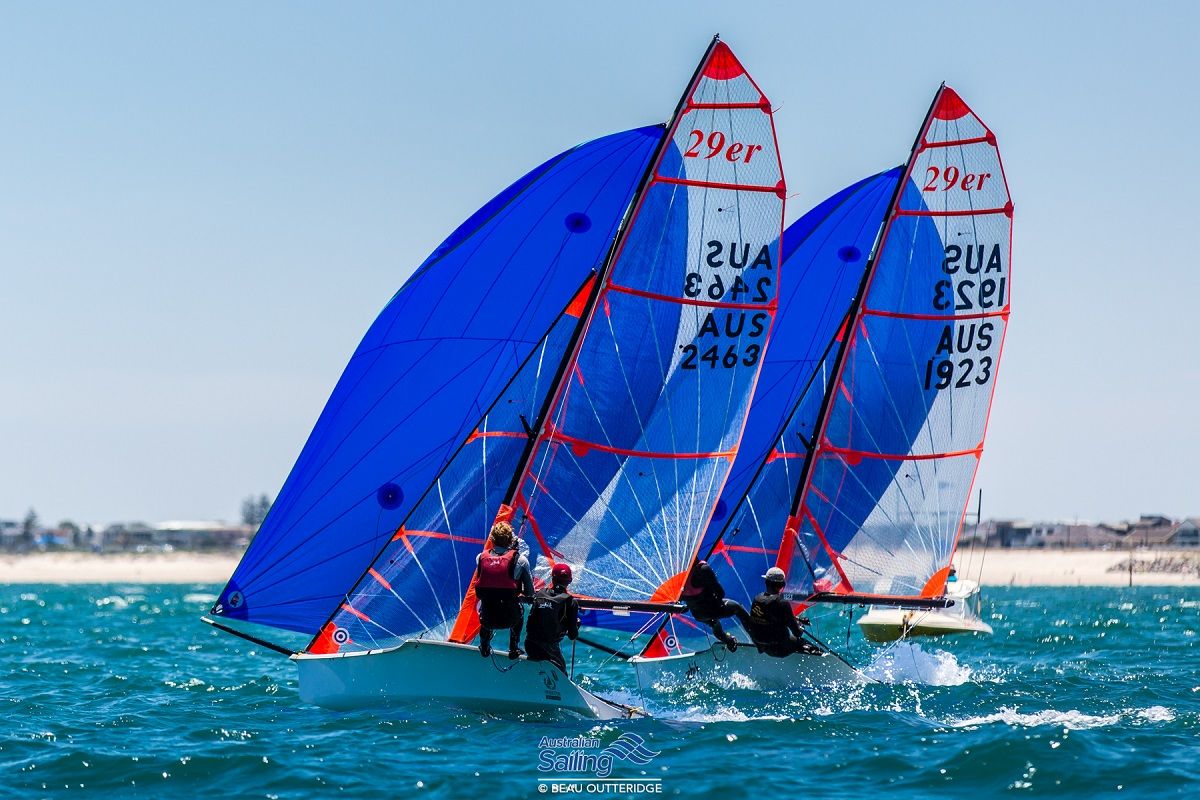 Racing for the 2017 Australian Youth Championship kicked off today, Wednesday 11 January, from the shores off the Adelaide Sailing Club with entries representing all Australian States as well as athletes from six other nations.  This regatta is the final selection event for those youth sailors vying for a spot on the 2017/18 Australian Sailing Youth Team.

A fresh South Australian sea breeze launched the competitors into day one of the four day championships. With 173 boats and 245 competitors competing across the five classes this year’s event has smashed last year’s attendance (who supported six classes). The sixth Catamaran Class, the Nacra 15 (the recently selected youth Catamaran class), are scheduled to have their 2017 Youth Championships in April later this year.

All five classes 420, 29er, Laser Radial, Laser 4.7 and Techno 293 were able to complete three races in breeze that quickly escalated to a steady 15 – 20 knots in pretty wavy conditions.

“It took a bit to get our heads around the wavy conditions but we got there and were able to make some good gains on the downwind. We’ve got a really competitive fleet so had a few general recalls out there which made the racing tough but rewarding after we gained a couple wins.”

Current 29er girls World Champions, Natasha Bryant and Annie Wilmot, sit third overall and first in the girls division with a comfy 25 point lead on the next all girls team.

Now a well-established crew in the 420 class, Nicholas Joel and Hugo Llewelyn, performed consistently well throughout their first day of racing sealing a second and two bullets putting them two points in front of close rivals Otto Henry and Rome Featherstone.

Marlina Berzins currently leads the girls division with a three point lead on Elyse Ainsworth; the two, predicted to be neck and neck with each other for the rest of the week.

“I was pretty happy with how I went today; Tasmania has pretty different conditions to here, so I was happy to make some good gains on the downwind and get in front of the West Australian guys who get these conditions pretty much every day. Conditions started out pretty mild with 12 – 15 knots then picked up to a solid 15 – 20 knots and big swell in the afternoon so it was pretty fun out there!”

West Australian sailor, Oliver Pabbruwe, leads the 4.7 fleet overall and first in the boys division with a one point lead on current 4.7 National Champion, Jack Littlechild. Oliver, who is used to these conditions, said,

“I was sailing out of Fremantle a lot before this event so I’m used to these strong sea breezes. The difference was that I had good starts and was able to play the shifts well. I just plan to take each day of the regatta as it comes.”

Alexander Halank took three bullets in the Techno 293 today and is predicted to take a podium place by the end of the event with the aim to beat his last year’s second place position. Similarly, Courtney Schoutrop leads the girls Techno 293 and hopes to retain her first place status from last year.

Racing continues tomorrow with the first race scheduled to kick off at 1200 for all classes but the Techno 293 who are scheduled for a 1300 start again.