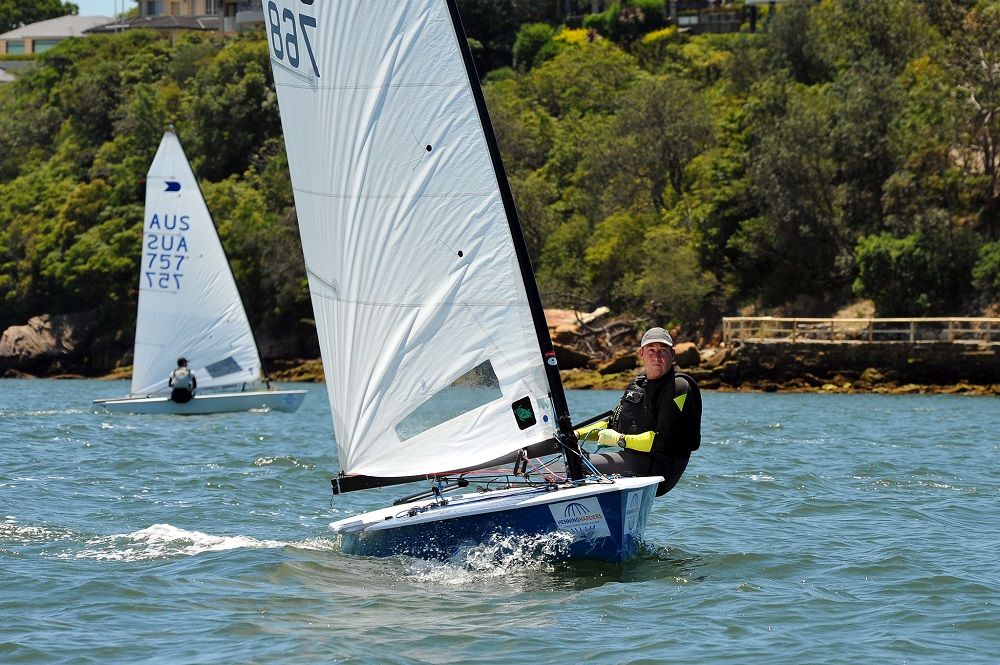 “I went for a pin end start again,” Mark Jackson confirmed. “At the start you couldn’t cross the line on starboard tack, so it was a mad rush to get to the pin, as the easterly came in just as we were in sequence, but I got off cleanly.”

Brent Williams was also hunting at the pin, but there was a logjam, “so I went looking for a hole in the line, found it, and port tacked half the fleet,” he said.

Williams and Peter Horne led heading up the first beat, well clear of the rest of the fleet. Gareth Wells (Wangi Wangi) was around the first mark third, Jackson fourth, with Kelvin Holdt fifth.

“I sailed very low and got a lot of lateral separation – and fortunately for me, they all sailed into a big hole – and I carried the pressure all the way around,” Jackson recalled

“Mark (Jackson) rounded the gybe mark in front of me, Peter Horne and others and we managed to keep that space all the way to the second beat,” Williams chipped in.

“The second beat was crazy – the breeze was coming from different directions at 180 degrees. Sometimes I was in an easterly and then I was in a southerly – all on the same beat – then pressure came back from north-east,” a bemused Jackson said.

“I nearly capsized three times to windward, then we left the confusion behind us and the breeze settled down after that. It was a bit of a lottery,” Williams conceded.

“It was a crazy day’s sail – a confused atmosphere,” Jackson said after beating Williams over the finish line by 50-80 metres.

“Kelvin (Holdt) is plugging away too – sailing very well, in the mix,” Jackson said.

Holdt from Southport YC (Qld) and South Brent Williams from Adelaide SC have moved up a place each to fourth and fifth overall, due to Blasse’s result today. The two are sailing consistently well at the top of the board – Williams finished second today, while Holdt was fourth.

Meanwhile, it was ninth for pointscore leader Davies, who said: “I thought I was over the line early, so I returned to re-start. Better to be safe, so it meant I didn’t have the best of starts. But I was able to move my way up through the fleet and finish ninth.”

With the light patchy wind spinning around the dial, Principal Race Officer, Rob Lowndes was damned if he did and damned if he didn’t. He called the boats out onto the course area well after the planned 1pm start, but minutes later the 36 competitors were back onshore.

It was after 3.15pm when the boats hit the water again and Lowndes was finally able to get the boats away for just one race at 3.45pm.

“It was a tricky race, even a tricky start. The boats came out in a west-nor-westerly, but it was easterly by the start, and a couple of boats got a north-easterly gust at the start. Pretty hairy,” Lowndes said.

When the race drop comes into play after Race 6 tomorrow, it is likely Day 1 leader, Peter Horne, will regain his lead, if he sails well. By dropping his Black Flag of Race 3 yesterday, the Drummoyne SC sailor will be enlightened by 37 points.

For all information photos and more: www.drummoynesailingclub.com.au/