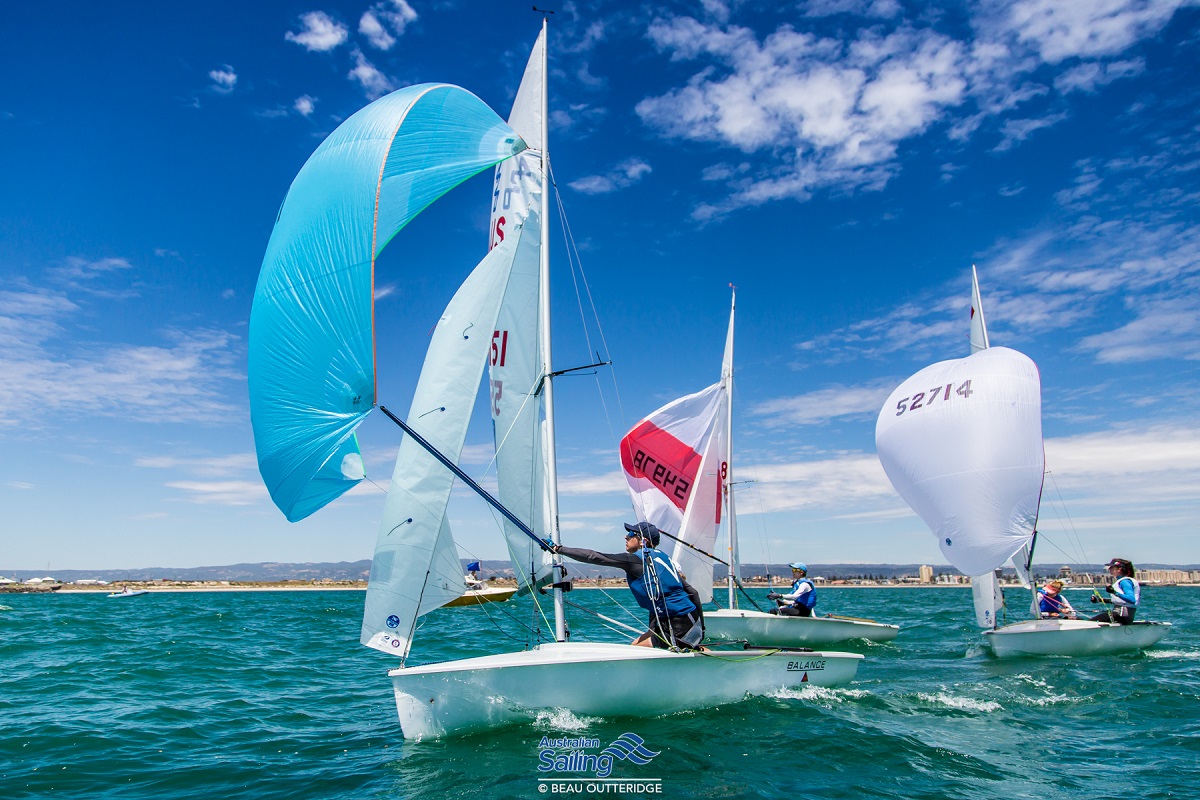 Following yesterday’s honking sea breeze, some sailors may have felt relief when 5- 8 knots first presented itself on day two of the 2017 Australian Youth Championships. With many competitors predicting a glass-out, most were surprised and relieved when the wind picked up and plateaued at a solid 10 – 12 knots for the three races that were completed today.

This regatta brings many new faces as past sailors age out and a new wave of athletes come through. New talents emerge and each competitor has the chance to make their mark. For the seasoned sailors this is their opportunity to be selected for the 2017 Australian Sailing Youth Team. The variety in South Australia conditions are testing the abilities of all the athletes as seen throughout today’s results.

New leaders in the boys 29er division have emerged for the second day of racing on the South Australian waters. 2017 29er National Champions, Henry Larkings and Miles Davey, have taken the lead. Despite some unfavourable results in the lighter conditions, they’ve maintained a solid eight point lead to 2016 29er World Champion skipper, Tom Crockett and his crew Max Paul.

In the girls division, World Sailing’s Youth Gold Medallists in the 29er Women’s Class, Natasha Bryant and Annie Wilmot, sit third overall and first in the girls. Natasha said, “It was tough in the lighter conditions today; the start was really important and when they were done correctly, we got a good result. The lighter breeze compacts the fleet so there were more opportunities to gain and event to lose positions. It was great to have the other girls’ teams in the mix today; we look forward to the heavier breeze tomorrow.”

“We didn’t have the best day out there but we took what we had and worked with it. We had to work hard to get away into the clear air and keep clear of the congested areas. It was nice when the breeze started to build towards the end of the day; we look forward to some more breeze on tomorrow!”

For Otto Henry and Rome Featherstone in the 420 class, the lighter conditions proved advantageous when they secured three bullets. This has them now sitting thirteen points ahead of Nicholas Joel and Hugo Llewelyn.

It was anyone’s game in the Laser 4.7 fleet today with podium finishes seen across the top nine boats overall. Oliver Pabbruwe took a step back into third as 2017 Laser 4.7 National Champion, Jack Littlechild, took the lead and now sits a comfortable twelve points ahead of Jackson Porter, currently sitting in second.

Samuel King and Caelin Winchcombe now sit equal first in the Laser Radial boys division; Samuel King retains a marginal lead on countback at eleven points. The two were neck and neck with each other for all three races today; tomorrow undoubtedly determining who will step ahead in this class.

Similarly in the Laser Radial girls class is the battle between Marlena Berzins and Elyse Ainsworth. After three races Marlena takes a six point lead to Elyse. Elyse is looking forward to the heavier winds coming back tomorrow,

“It was tough out there today and the competition was really good. I had mixed results with the changing conditions; I look forward to the breeze picking up tomorrow.”

On the other hand, Courtney Schoutrop took a step back from her lead position and relatively new sailor to the Techno 293, Hailey Lea, gained a seven point lead after the three races. She not only leads the girls division but now sits third overall. Hailey said,

“The light conditions work well for me; I also played the shifts well to make the gains when I could. I tried hard to keep up with Alex today and managed to beat him in one race! I think Courtney struggled in the light air so will be interesting to see what happens tomorrow when the breeze picks up again.”

Racing continues tomorrow with the first race scheduled again at 1200 (ACDT) for all classes but the Techno 293 who begin at 1300 (ACDT).