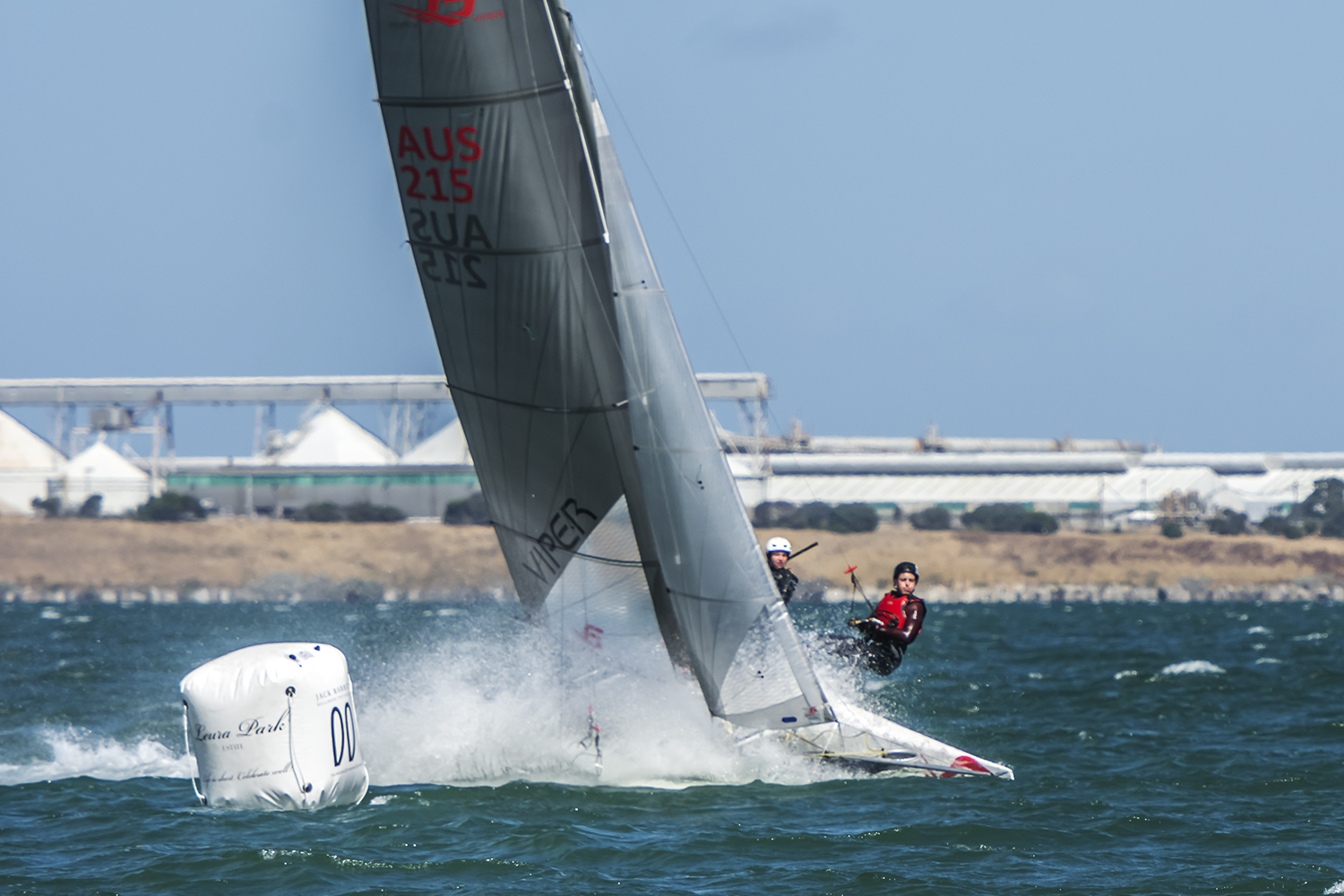 Corio Bay’s summer sea breeze can test the mettle of the most experienced sailor and on day three of the Viper Worlds 2017 it threw a few off their feet, producing a number of dramatic capsizes that made great fodder for the waiting photographers.

Conditions were tough for both race committee and crews, winds shifting around from the south-west to the south-east and huge variations in direction and strength. Yet the pointscore leaders Jack Felsenthal and Shaun Connor (AUS) still shone, scoring a first and second to hold onto the overall lead by seven points with seven races remaining.

“We are feeling comfortable all round, though it’s getting tougher later in the regatta. It’s good to be pushed,” Felsenthal said back at the Royal Geelong Yacht Club after racing. “Today was good fun, especially in the third race. We were in the lead going around the last top mark to the finish when we went over, which cost us a place. Turns out we had a knot in the mainsheet. We managed to get the boat back up reasonably quick and keep second.”

Having competed for six days straight both at Geelong and at preceding regattas the pair are looking forward to giving the body a break and recharging when the fleet enjoys a layday on Thursday.

Tayla Rietman and Lachlan White staged a massive fightback from last off the line in race 8 to mixing it up with the frontrunners when Rietman’s trapeze wire broke at the handle and the handle flung and hit her crewmate square in the eye. This evening White is waiting at the local hospital to be assessed by an eye specialist.

The combination scored their first bullet of the series in the previous race, Rietman commenting this afternoon: “We’d had seconds and thirds but hadn’t cracked the big one…. until today. The top five in every race is pretty hard to crack so as long as we are up there we are happy.” On the breezy conditions she said, “The wind was spot on. We are on the lighter side but we can hold the boat down and get some good speed out of it. There were no waves at the top mark, you could just send it!”

Now the wait is on to see whether Rietman and White can finish off their world championship series as a team.

Current Viper world champion Emmanuel ‘Manu’ Le Chapelier (FRA) and crew Theo Constance moved into third overall. On whether they can catch the Aussie teams of Felsenthal and Connor and the Van Kerckhof brothers with three days remaining Constance said, “It will be hard but we will try. At least (we might catch) the brothers.”

Race 6 played out in a sou’wester 14kts and race 7 in a sou’easter that had increased 10 knots, up to 18 knots, between the start and the first bottom gate rounding. By race 8 the breeze was up to 21 knots, pulling the trigger on the Vipers and bringing about a number of capsizes.

At the end of racing only 17 boats were left on the track to revel or crash and burn in the fresh afternoon sea breeze in Geelong’s Stingaree Bay.

So enthusiastic was the hollering accompanying their incredibly fast race 6 finish it seemed Michael Pfeffer and Leo McAllister of Boaty McBoatFace Sailing had won, rather than placing mid-fleet.

Laurent Verbeek and Stef Haazen (BEL) returned to the championship series on Wednesday January 11 after missing the chance to claim points from three races on Tuesday when Haazen fell overboard and cut his lip, requiring stitches. The pair managed two starts on Corio Bay before they were forced to pull the pin midway through race 7 when Haazen’s trapeze broke, sending him swimming for the second day in a row.

“Yesterday at the top mark we were doing quite good but I did a stupid thing and I fell off the boat and hit the centreboard with my face,” Haazen described, deadpan. On today’s fall Verbeek added, “Stef went swimming but this time he only went swimming, nothing hit him.”

The superstition is bad things happen in threes and on this Verbeeck laughed, “We hope it stays with two. We will check everything again on the layday.”

On Thursday January 12 competitors will enjoy a rest day and return to complete the scheduled 15 race series from Friday until Sunday January 15 when the 2017 Viper world champions will be announced and awarded a stunning Bausele timepiece each.