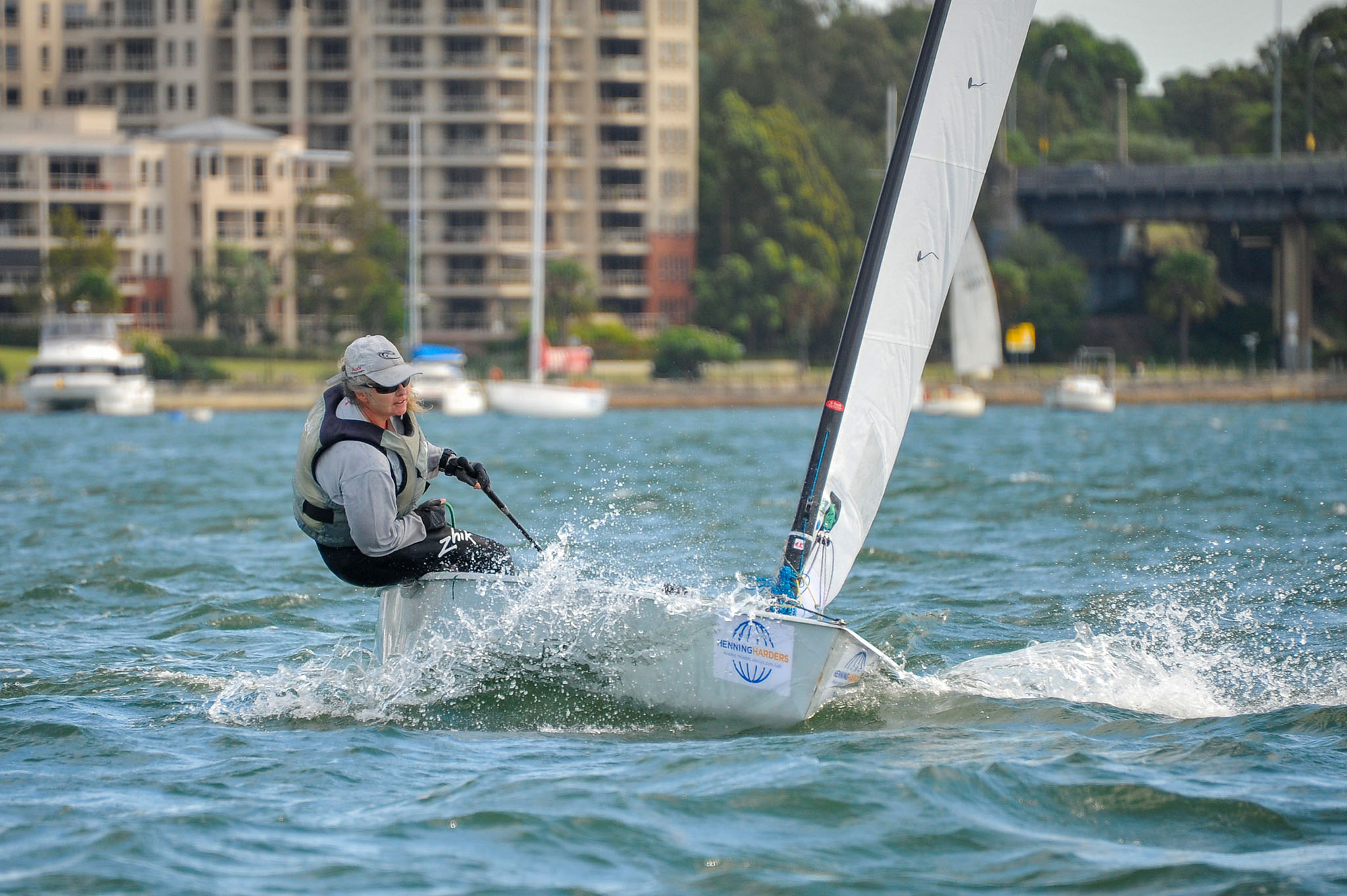 Anyone would be daunted taking on the opposite sex in sport, but Elizabeth Williams is right at home and holding her own in the otherwise male domain taking part in the OK Dinghy National Championship at Drummoyne Sailing Club this week.

Originally from Victoria, Williams is the eldest child and only daughter of eminent Victorian yachtsman, John Williams, of Bacardi, Georgia and Calm fame.

“I have three younger brothers – Bruce, Michael and Peter. Dad would go off big boat racing and we four would go to Black Rock Yacht Club and sail our Sabots.”

All four are still sailing. Williams graduated from the Sabot to a 420, to Sharpies, Europes then returned to Sharpies. And she sailed big boats with her dad on occasions. “I loved the Sharpies,” she says.

“I sailed on a couple of TP52s, mostly on Calm (co-owned by her father). It was fun roaring around in a bit of carbon. I also sailed a little bit on Georgia,” a Farr 53 owned by her father (a 26 Sydney Hobart veteran) in partnership with another Victorian stalwart, Graeme Ainley.

“I did one Hobart – on Calm, but my favourite race was the Sydney-Gold Coast. It makes more sense to me to turn left out of Sydney Harbour and head somewhere warm.” And during these times, she has sailed with all her brothers, “In Sharpies or on big boats.”

And despite her declaration of “I perform better as part of a crew, I love the camaraderie,” Williams started sailing OK’s “because my husband (Erik Thompson) sailed big boats then sailed racing OKs at Black Rock – and I’m not good at watching – so I got one too.”

The two moved to Queensland and sail at Sandgate Sailing Club and Southport Yacht Club (Qld) and both are competing at these Nationals. Williams is currently in 11th overall with four races completed, while Thompson is 35th from 36 competitors.

“We always sail at opposite ends of the fleet. If she’s at the front end, I’m at the back and vice versa,” Thompson says wryly.

At Southport Yacht Club, Williams has two other women for company in the fleet, but it doesn’t matter either way, because the OK guys are a friendly do-the-right-thing bunch, evidenced by lack of protests at regattas. One of the women is a junior – which is great – good to see young people having a go. Dad’s secretary, Emma, is the other one.”

Williams says that because the rules and technology have evolved, including the use of carbon masts, “and also being able to use smaller sail, keeps the OK sailable for me.

“The thing I love about it is it’s such good racing – there are very good sailors in the class. It’s lots of fun. We get up to 15 boats at Southport and usually have 10 to 12 sailing each weekend.

“My results are highly associated with wind strengths. The last two days have played into my hands,” she says of the light to moderate breezes that have saturated the course on upper Sydney Harbour at the Nationals where she scored a third place in Race 4.

“Mark Skelton (currently second overall) reckons if the race had gone another 100 metres I would have won. I had a bad start, but kept moving forwards through the race to finish third.”

“It’s a pretty good class. The people make it. Everyone does their penalty turns, you see few protests. There is longevity in the class too – like the Blasse brothers (Andre Blasse is racing here and in third overall),” says Williams who had only sailed an OK twice when she entered her first Nationals, at Hobart in 2011.

“I’ve learnt a lot since then. I’m much more confident in heavy weather. Time has enabled to practice in strategy and tactics. I’m happy with my progress. To improve much more, I would need to spend much more time on the water.”