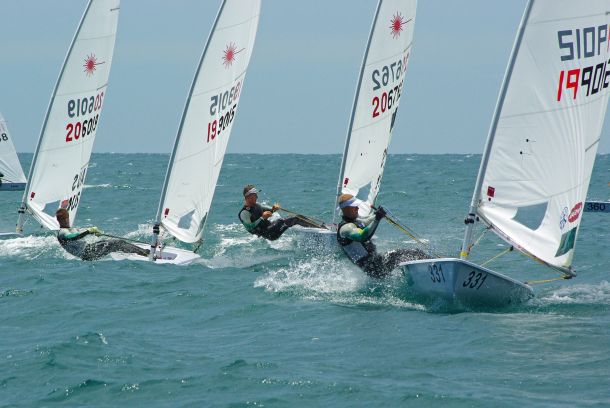 The sea breeze came booming in and PRO Ross Wilson was taking full advantage of it. With the luxury of all six races under his belt he indicated that the next four would be even better in the lead up to the final day. The breeze on both days started in the south and worked around to the south west with the first day finishing with 20 knots and the Saturday with better than 20 knots and a big sea running.

On the penultimate day, Matt Wearne has grabbed two bullets after picking one up on the Friday. It won’t change things as the Burton grip is too strong, but the pleasure of a few late wins in the booming sea breeze has clearly set Matt’s mind at ease. He’s more comfortable with the upwinds and said so this afternoon. And at the same time, he’s not let his downwind speed drop. A winning package that will allow him to look at two more on Sunday.

In the Masters, the racing continues to fascinate as the lighter weather on Friday brought the elder statesmen of the Laser community out for a sail and Saturday had the prudent promptly diving back into shelter. The leaders are Gavin Dagley of Victoria and Grant Loveday of WA and David Whait of WA.

The Radials split into Gold and Silver fleets and the promised meeting between Western Australians Tristan Brown and Alistair Young happened with Alistair enjoying a clear advantage in the strong winds on the day. At this time with drops, Alistair is 2 points clear of Tristan and the fleet itself worked hard over the two days with Conor Nicholas of WA sitting third on 18 points and Finnian Alexander of NSW fourth on 26 points. Top female is Ashley Stoddart who has handled the conditions remarkably well to sail to sixth place and the top master in radials is Mark Kennedy from Queensland in tenth spot..

In Silver Fleet, West Australian Harmon McCaullay leads with Andrew Whittell of WA second and Bruce Utting of WA third. Incidentally, both Andrew and Bruce are both Grand Masters and have carried themselves well for the series, each scoring at least one bullet.

Victorian Brody Riley of the 4.7’s must have been studying the Burton model as he has very rarely strayed outside the top three placings in all the strengths of the breeze available. He has watched the movement of the competitors below him and is playing a game from the front. A comfortable spot to be in. Caelin Winchcombe of WA has moved up to second with some fine boat handling and Jordan Makin of NSW lies third.

There are a number of people, who could have a crack at third spot, but it’s a matter of consistency now and with a good breeze forecast, it’s not the time to put a foot wrong. In the female 4.7’s, Zoe Thomson of WA continues to punch above her weight as she is consistently putting in good (top ten) performances. Her nearest rival sits at 21 and Zoe clearly is capable of sailing in these big winds, although speaking to her today, she did admit to being tired after the day on the water and said the term survival came to mind.

The medal races kick off tomorrow with the breezes forecast to be as good as they’ve been all week. A brilliant day on the water for everyone to enjoy. The question put two days ago will answered. Who are the best in Australia?