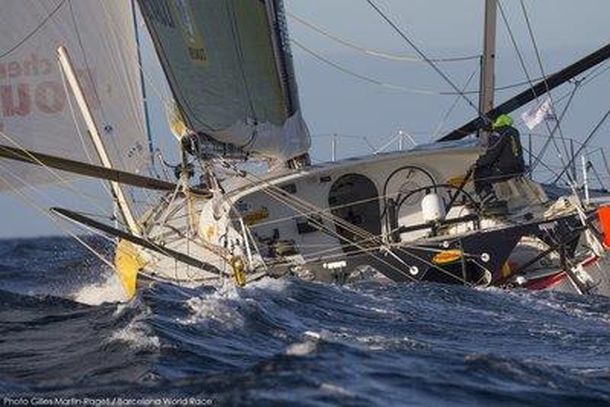 If during the pre-start hours in Barcelona there were fears that one Barcelona World Race duo might conjure up a breakaway in the opening days, so far such worries remain unfounded. Among the 'three musketeers' who are making the pace – albeit at speeds of a Sunday promenade today – there is still very little to choose between them.

The small advantage is back with Hugo Boss, Alex Thomson and Pepe Ribes, but Cheminees Poujoulat, Bernard Stamm and Jean Le Cam, and also Neutrogena, Guillermo Altadill and Jose Munoz have all had the lead during the last 24 hours and boat speeds in the very light downwind conditions remain very similar.

The British-Spanish duo on Hugo Boss only just have their nose in front by a matter of x miles this afternoon. Seven miles to their west and a little behind are the Swiss-French skippers and a similar distance to their east are Neutrogena, the Spanish and Chilean pair.
In the grip of the light winds caused by a prevailing zone of high pressure, the trio are balancing the chance to work the best of the small pressure differences with a likely desire to stay in contact with the group.

After the intensity of the first days in the Mediterranean, the stress levels spiking to a peak in the Straits of Gibraltar yesterday, Sunday is scarcely a day of rest. There has been the chance to rest more between manouvres, the shipping traffic has largely diminished, and the extra curricular activities – removing weed, nets, debris from the foils – is hopefully also in the past.
>From on board second placed Neutrogena today, passing the latitude of Madeira with 250 miles to go to the Canary Islands, Guillermo Altadill reported:
“So more or less we area trying to keep the boat in the race and not lose contact with the other boats. We will try to do some manoeuvres a few times to try to find the wind, which should come from the right side. So we’re expecting to gybe and probably not necessarily to be able cross the bows of the other ones but to be closer to them. It’s just the beginning of the race so on these long races you try not to lose contact with the top of the fleet. I’m not so very obsessed by the idea to be with them all the time, to control them, but just really to not lose contact. If they are 10 miles in front or 10 miles behind, you want to be in the same system all the time.  The main thing, what we are doing now, is sailing our own race basically.”

Anna Corbella and Gerard Marin have been hold ing on to the breeze slightly longer, placing themselves closer to the Moroccan coast. The GAES Centros Auditivos duo have made some gains but the best advances have come from Jorge Riechers and SebastienAudigane on Renault Captur. They have been able to use the stronger breeze generated on the fringe of the high pressure to their NE and make better progress. Their deficit behind the three musketeers has been reduced by 23 miles since yesterday and German-French pair were making a more westerly track this afternoon, still slightly quicker than the four boats in front. But unfortunately for them they will slide down into the same light winds area and their gains will stop meantimes.

For the leading half of the fleet the challenge is to get to the NE'ly trade winds which retreated south of the Canary Islands. Renault Captur, too are getting into the ENE'ly breeze system which is shifting more to the N this afternoon and evening. Their immediate problem, such as it is, is that the High Pressure to the NW of the leaders is moving SE with them and so there is no sign of any immediate increase in pressure.
They should feel the first of the NE'lies very late Monday, perhaps and by later Tuesday or Wednesday considering when to make the solid turn towards the SW. Current routings for the top three show a negligible difference for the coming days after that, suggesting a boatspeed drag race almost all the way to the ICTZ or Doldrums. That routing also seems to point to Renault theoretically being able to maintain the same delta all the way. In Theory. The shape of the first part of the race has been set in the Mediterranean which is good for the leaders.

For the other half of the fleet the good news for Nandor Fa and Conrad Colman is that their freedom from the manacles of the Mediterranean seems to be on the cards. They should have some ENE'ly breeze this Sunday afternoon which should allow them to finally pass Gibraltar early Monday morning.

We Are Water, Bruno and Willy Garcia, in seventh have had a solid Sunday, on the NW corner of the high pressure which means they have had decent, favourable breeze and have been making some of the best speeds of the fleet on the former Estrella Damm. The Barcelona brothers will start to run into lighter airs too, reducing their chances of catching miles on One Planet One Ocean Pharmaton. Aleix Gelabert and Didac Costa are almost 90 miles ahead of the Garcias. In the oldest boat in the fleet, they have sailed astutely in the Med.

Gelabert, from on board the former Kingfisher which took Ellen MacArthur to second in the 2000-2001 Vendèe Globe, reported to today's conference:
” The Strait of Gibraltar, initially had light wind but then, as expected, we had 35 knots at the exit of the strait. Anyway, the forecast had said there would be wind but not that much, and as we know that there is always more wind than the forecast says so we were already prepared and ready. Meanwhile we go at our pace, we are on our own, what will happen  has to happen. We had never tried racing with other boats and did not know where we should be. We're a very happy and very surprised. We have the oldest boat in the fleet and we would expect to be a little behind, but here we are.”
Ranking at 14:00 UTC Sunday 4th January 2015
1 Hugo Boss (A Thomson – P Ribes) 22,629 miles to finish
2 Cheminées Poujoulat (B Stamm – J Le Cam) +2.7 miles to leader
3 Neutrogena (G Altadill – J Muñoz) +4.5 miles to leader
4 GAES Centros Auditivos (A Corbella – G Marin) +24.7 miles to leader
5 Renault Captur (J Riechers – S Audigane) +64.9 miles to leader
6 One Planet One Ocean & Pharmaton (A Gelabert – D Costa) + 121 miles to leader
7 We Are Water (B Garcia – W Garcia) + 210 miles to leader
8 Spirit of Hungary (N Fa – C Colman) + 415 miles to leader

Skippers' Quotes:
Guillermo Altadill (ESP), Neutrogena: “Everything is ok after the Med, after Gibraltar life on board is a little bit more relaxed. There was a lot of shipping traffic, a lot of mess in the water, it required more concentration, here you only need to concentrate sailing and on the route, so things are more normal. In line with Tarifa when we started catching some nets. First there was one and we got free from that one. The second one, the boat got hooked and we were right in the middle of the net for a while with the boat slowed right down, and that was the time the wind picked up so it was really bad for us because we had to drop the sails, go head to wind and try to cut the net from the rudder.
Everything is ok, except there’s no wind. So more or less we area trying to keep the boat in the race and not lose contact with the others.”
“I think the trade winds will not pick up before later tomorrow. I hope this is going to be like the transition and then the more south you are the quicker you will get these trade winds. So probably there will be another time when the top three boats pull out from the boats behind. But this is what the theory says, but we have to be wise because the weather is basically a bit complicated now.”
Following their theory that it is better to be straight into the dried food routine rather than undergo a 'transition' from fresh, Altadill explained:
” Well, because you have to suffer! So you have to suffer from the beginning, there is no point to any fresh food if you have to go onto a diet of freeze-dried food for the next two and half months. So it’s better to start straight away from this dried normal food and then get used to it. I think it’s better. You can get take a couple of fresh foods but I think there’s no point to delay what is going to be your daily food – and the freeze dried food is quite good, so it’s no problem. As well we started eating the freeze dried food they gave to us from the restaurants in Barcelona, and that’s quite good, so we’re almost eating better than at our house!”

Aleix Gelabert (ESP), One Planet One Ocean Pharmaton:
Asked if they are ahead of their expectations:
” I don't know what to say. We had never tried racing with other boats and did not know where we should be. We're very happy and very surprised. We have the oldest boat in the fleet and we expected to play to be a little behind, but here we are. The Mediterranean is very complicated and there have been many light wind conditions and this means and older boat like us might be ahead of you.”
Of their scientific experiments and measurements he said:
” We start right off Barcelona, and activate all devices we carry on board and all of them are already operating. We are already taking measurements, changing filters and doing all the things they've asked us. We are lucky and these experiments can be performed.”