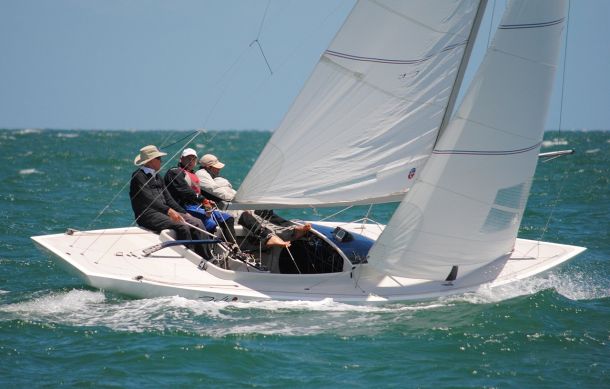 Robert Campbell (GBR) and the crew of “Indulgence” from Royal Sydney Yacht Squadron have won the Ted Albert Memorial Regatta in convincing fashion with three wins from three starts.

The one-day regatta was the prelude to the Prince Philip Cup, the 2015 Australasian Championship for the International Dragon class being conducted by Royal Brighton Yacht Club.

Perfect Port Phillip racing conditions were turned on for the Ted Albert Regatta today, with a consistent southerly remaining between 10-15 knots and a sunny afternoon.

Englishman Campbell is no stranger to the Prince Philip Cup competition and is a past President of the International Dragon Class. This year he has teamed with RSYC sailors Robert Alpe and Richard Franklin in a chartered boat. They were challenged but never headed today.

With the extreme heat and windy conditions in Melbourne over the preceding days, there has been little opportunity for many of the visiting sailors to practice ahead of the Regatta.

“Today was a good day for interstate and international crews to get accustomed to the Port Phillip conditions”, said Race Officer John Spencer.

“This lead-in event to the Prince Philip Cup also provided a shake-down for the RBYC Race Management team with all three races going very smoothly”, he said.

The 2015 Prince Philip Cup Regatta gets underway tomorrow with seven races scheduled before the Championship concludes on Friday.