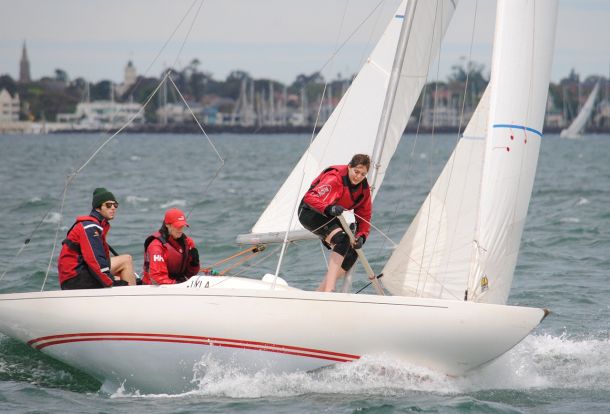 The young RBYC crew of Lyla will be competing for the Prince Philip Cup. Photo David Staley / RBYC.

The 2015 Prince Philip Cup Regatta, the International Dragon Class Australasian Championship, gets underway at Royal Brighton Yacht Club this Monday. The Championship will follow the 2015 Ted Albert Memorial Regatta, a one-day event that is being sailed tomorrow.

Boats have been arriving from all over Australia since Christmas and the past two hot and windy days have been busy with registration, measurement and boat preparations.

Entries have been received from Great Britain and four Australian States, with competitors including the Sydney-Hobart winning skipper of “Wild Rose”, Roger Hickman.

The Ted Albert Memorial Regatta comprises three back-to-back races tomorrow, when moderate south westerlies are forecast and much cooler conditions than Melbourne has experienced over the last couple of days.

The 2015 Prince Philip Cup Regatta schedule includes two races each day on Monday, Tuesday and Thursday, with a single race to conclude the regatta on Friday January 9. A rest day for competitors and volunteers is scheduled for Wednesday.

All races are windward-leeward and are expected to be of 60-90 minute duration.