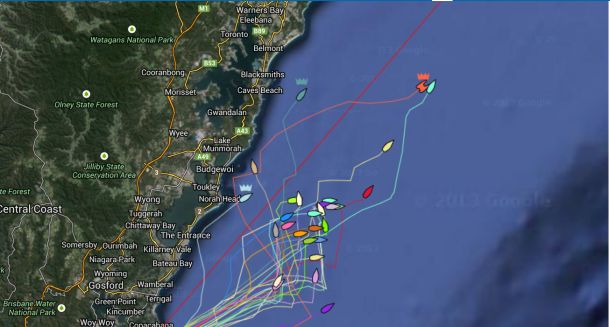 Before the start of the Pittwater-Coffs Race, owner of the ORMA 60 trimaran Team Australia, Sean Langman, said he would try to make up the 15 minutes start the multihull had given the monohulls, then “cover” the 80ft Beau Geste.

At 6.30pm on the first day the big tri had done eaxactly that and was sitting slightly to windward of the monohull. They were both south-east of Newcastle in light winds, sailing at only 7 knots and still with 180 nm to sail.

“We have Beau Geste right off our starboard side about 500 metres away,” said Team Australia’s navigator Josh Alexander. “We’ve had south-west winds, now it’s starting to back to the east. We’ve been struggling for the last two hours doing 5 knots of speed, but we are coming back into the good stuff now. Hopefully we can get going in the next two to three hours. Jimmy [Spithill] had a drive for a while.”

Team Australia began its dash north at 1315hrs and quickly wound up to be flying on one hull for the reach across the mouth of Broken Bay and out into open waters in the puffy 12 knot sou’east breeze. Conditions were hazy for the two starts and the sea churned up by a sizeable flotilla of spectator craft fare welling race-goers.

The two TP52s Ragamuffin and Shogun have chosen totally different tactics, with Syd Fischer's 'Rags' inshore of Caves Beach and leading on both IRC and ORCi.  Rob Hanna's Shogun has gone offshore searching for wind and was just under 1nm behind the leader.

“We have been waiting for the NE’s all day – a good wind angle and strength for Margaret Rintoul. Instead it keeps going right, so now the wind is 225 to 230, which is dead opposite to the forecast. We have gybed along with the boats around us to take us closer to the next mark – Port Stephens. It is quite frustrating.”

Still there is plenty for Hodder to celebrate as she explains, “Sailing on Margaret Rintoul is sheer pleasure compared with most of the boats I have raced on. I was showed to my own bed(!), well the lounge. The boat’s chef has given us a run down on the menu including the wines. The toilet actually WORKS! AND it has a shower! I could live here.”

The tracker can be seen at http://www.pittwatertocoffs.com.au/live/yacht-tracking.