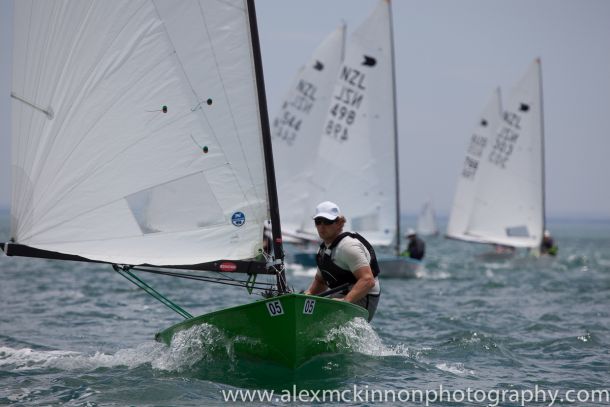 It was a drama filled day at Black Rock YC on the third day of the OK Dinghy World Championship in Melbourne, Australia. Luke O'Connell (NZL) won the only race of the day to take the overall lead from Matt Coutts (NZL) and Matt Stechmann (NZL)

On arrival at the club this morning after the New Year lay day, the sailors were greeted by a glass like sea and rising temperatures, and generally had tales of a day doing nothing much the day before. During the morning the fitful wind fought between the land and the sea and after a short postponement the fleet was sent out in a building northerly which surprisingly was gusting to 23 knots from the north-west. However by race time this was down to 8-12 knots and dropped consistently throughout the race to 2-4 knots by the finish.

The first beat was dominated by the building pressure on the left. A few were tempted over to the right closer to the land, but the pressure line brought the left side up to the mark in the lead. Christian Olesen (DEN) was first round followed by Jørgen Svendsen (DEN) and Luke O'Connell (NZL).

Olesen maintained the lead down the reaches but Svendsen made his move on the second upwind to lead round the final loop. By this time O'Connell was up to second and half way up the final upwind, the wind almost disappeared and clocked left 30-40 degrees. Svendsen had placed a very loose cover over the Kiwi and had almost let him out in front. It got quite close at the finish, with Svendsen slapping the final cover on O'Connell to take the winner's gun. Olesen crossed in third.

Svendsen said, “It was a fantastic race. I didn't get the best start, but there was a lot of wind on the left side so even though I was behind Greg Wilcox and had his bad air, I just kept going and after a while he tacked and I kept going until almost the layline before tacking. That was almost the whole race done.”

“I took the lead on the second upwind and we were were very close on the downwind but luckily I managed to round the gate just ahead and we went to the left again. I was a little bit too gentle with Luke so we got very close at the end. When we tacked I let him go first and I was getting a little worried, but then we we tacked for the line I was able to stay ahead.”

“It was very tricky. I just tried to stay close to the others but it seemed the more you got to the left, the better it got all the time.”

On his performance this week, he said: “You can see if it's a heavy breeze because I am too skinny, and my results often depend on the weather conditions. In Denmark we would have sailed three races in these conditions, and actually when it's very windy we just stay in the harbour, but also because we have a lot of veterans in the class, so normally we don't race when it's too windy.”

The fleet then waited afloat in hardly any wind for an hour in stifling temperatures before being sent ashore to wait in the relative cool of the club. The temperature ashore was 37 degrees. Just after 17.00, the signal went up to cancel racing for the day with the chance of any wind looking less and less likely.

However, the drama was not quite over. Once back ashore, Svendsen was protested by the Race Committee for a technical irregularity and was subsequently disqualified from the race. This left O'Connell as the race winner from Olesen and Mark Skelton (AUS).

So, three days in to the championship and only three races have been sailed. Five are needed to make a championship and with two days left, the PRO, Mark Taylor is not panicking just yet. There is wind forecast for Saturday, perhaps too much, and discussions are ongoing over the best way to use what wind there is, so there could be a change to the schedule at some point. The overnight forecast into Saturday says another heavy front is coming through with winds up to 50 knots. The hope is that this will moderate enough during the morning to enable racing to take place.

O'Connell summed up his regatta so far, “It has gone well so far, and I have been lucky to be so consistent. A few of the other boys have a big score on the card, but when the drop comes in I may well drop down a bit. But it's good to be in contention after what has already been quite a tricky regatta so far.”

“The PRO is going to have a bit on now but I think we should get the series in no problem. Tomorrow is meant to be fresh again, so might be a problem, but I think it will be OK. It will be a shame to come all this way for everyone and not get a result.”

On his goals for the week, “My goal was definitely top 10, but if things went my way then I thought I'd have a shot at the top. But most of all I am desperate to get a tie. I've never had a tie before, so really want want of those, but to take it out would be great as well. There's no pressure yet – it's still a bit early. If I can keep cruising along, I'll be quite happy.”

The top 10 all get awarded an OKDIA Championship tie and these have become the mark of a top OK Dinghy sailor. They are coveted by OK Dinghy sailors worldwide, but they can only be obtained with a top 10 result at the world championship.

On the race today he said, “Today, I finally had a good start. It made things so much easier. When you don't have to fight your way back through the fleet you realise how easy sailing can be. If you get a shift you can take it and don't have to wait for everyone else to take it and then find a lane.”

“The weather so far has been all over the place. I think it is not quite what everyone was expecting.”

With two days to go the points at the top are very close with just four points separating the top five boats, though with a potential four races to go, the series is not even half way through, in theory.

Two more races are scheduled from 13.00 on Saturday.