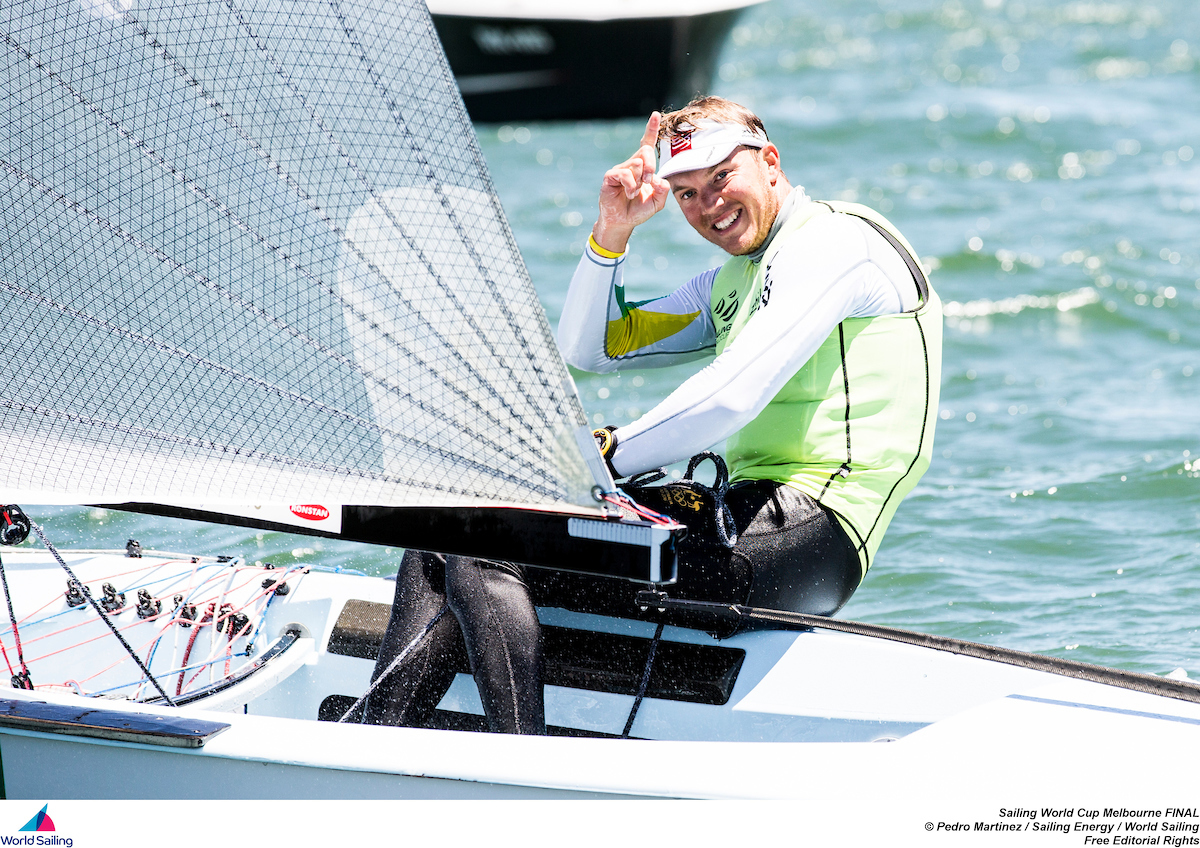 The Sailing World Cup Melbourne Final presented by Land Rover saved the best to last with the Laser rounding off the week of competition and serving up two tantalising in-race battles that decided the podium places.

Matt Wearn (AUS) and Pavlos Kontides (CYP) held the top two Laser spots on 18 and 20 points with Tom Burton (AUS) and Tonci Stipanovic (CRO) third and fourth on 34 and 35. The top scorers were well clear of the pack heading into the Medal Race so it was first versus second and third against fourth to decide who walked away with the World Cup honours and a share of the $200,000 AUD prize fund.

The last to sail on a day that also included the Medal Races in the 470s, Finn and Laser Radial, the competitors enjoyed 10-14 knots of south westerly breeze in gorgeous Melbourne summer sunshine off the St Kilda Sailing Precinct.

Kontides, London 2012 Olympic silver medallist, knew that victory would hand him an inaugural World Cup gold medal. His demeanour in advance of the decider was a man full of confidence and after a conservative start he managed to hit the front of the fleet and grab the lead on the second upwind.

Meanwhile, Wearn found himself mid-fleet, pushing to catch up with Kontides. Wearn was forced to do penalty turns after an infringement at the third mark rounding. That ultimately sealed his fate as Kontides streaked away to win the double points race and with it, gold.

“This is my first gold medal in the senior fleet,” said Kontides through a beaming smile immediately after racing. “I've come close to winning many times but I'm really glad I have finally won. It was a great week with great conditions.

“This is the start of a new cycle and it's good to start it in this way.”

Wearn finished fourth which confirmed his silver medal but he was visibly frustrated, “It's very disappointing after leading for two days. Pavlos sailed a lot better today but there were a few times this week where I gave points away, but that's racing. It's a nice end to the year and I'm looking forward to World Cup Miami and the new cycle.”

In the other battle, a familiar one within Olympic Laser sailing, Rio 2016 gold medallist Burton and silver medallist Stipanovic were up against each other, again! Overnight the pair visited Luna Park, a popular Melbourne attraction, and World Sailing was on hand to give them some healthy competition at the historic amusement park.

Back on the Stadium course on Sunday Stipanovic pulled ahead of Burton from the outset and maintained his superior boat speed to pull away. The Croatian came through in third which handed him bronze and the Australian finished tenth.

It was advantage to Rio 2016 Olympic gold medallist Marit Bouwmeester (NED) in the Laser Radial fleet heading into the Medal Race. The Dutch racer took a 12-point lead over Rio 2016 bronze medallist Anne-Marie Rindom (DEN) into the final day and played her cards perfectly to walk away with World Cup gold.

“I should have been a bit more aggressive to win the race,” said Bouwmeester. “I thought if I stayed close to Anne-Marie I would be fine. I don't think I sailed my quickest but I'm happy to be here and finish the year off with a win. I'm going to have a nice break, put some proper work in and then I'll be back next year.”

Jake Lilley (AUS) won the Finn Medal Race and with it, World Cup gold. Lilley had a consistent week of racing that was only marred by a scoring penalty in the seventh race of the series.

He was poised to take the title and took the early lead in the concluding race, then sealed the deal. Ed Wright (GBR) followed to give him silver and Rio 2016 bronze medallist Caleb Paine (USA) completed the top three.

Austria's Lara Vadlau and Jolanta Ogar rounded off their week in the Women's 470 by winning the Medal Race, their seventh victory from nine races. Carrie Smith and Jaime Ryan (AUS) played second fiddle to the Austrians for much of the competition but pushed them hard. Vadlau was quick to acknowledge their rivals, “They're always coming close and making it exciting. That's how we love it. At the end we always had the nose ahead of them and we are happy.”

Ogar continued, “It's perfect to end the year winning the World Cup Final. Now we can go home for Christmas, chill a little, and think about what we're going to do next.

“We have Tokyo 2020 in our thoughts somewhere.”

Nan Zhang and Yixiao Lv (CHN) rounded off the podium.

Rio 2016 silver medallists Mat Belcher and Will Ryan (AUS) were equally dominant in the men's division and had won gold in advance of the Medal Race. They added to their six fleet race victories in the Medal Race to sign their week off in style.

Daichi Takayama and Kimihiko Imamura (JPN) and brothers Alexander and Patrick Conway (AUS) ended their event tied on 36 points but silver went the way of the Japanese duo as they finished second to the Conway's fourth in the Medal Race.

With the 'Road to Rio' now concluded it's time for 'Target Tokyo'. Sailors will enjoy a period of rest before the 2017 Sailing World Cup series kicks off in Miami, USA from 23-29 January 2017.

World class sailing continues through December and attention now turns to the 2016 Aon Youth Sailing World Championships starting in New Zealand on 14 December where the best youth sailors will gather for their pinnacle event.