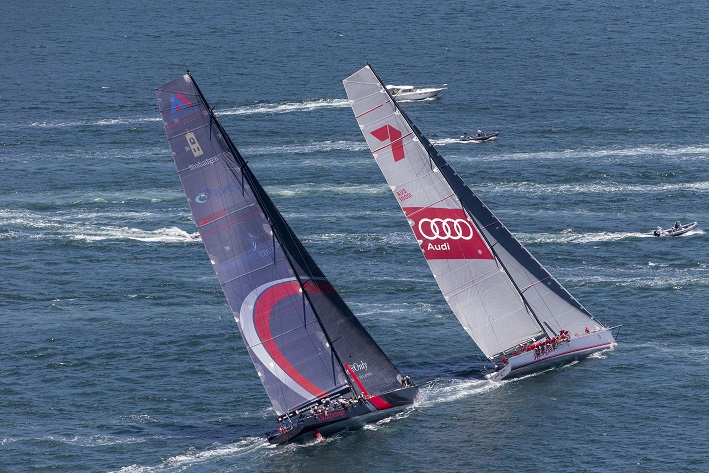 For the ninth time Wild Oats XI has won line honours in the Cruising Yacht Club of Australia’s annual SOLAS Big Boat Challenge around Sydney Harbour. But this year there was no sense of deja-vu at all. This was a much tighter boat race than the 3 minutes between Wild Oats XI and Perpetual LOYAL at the finish line suggests.

This was an absorbing tussle between Wild Oats XI and Perpetual LOYAL that bodes well for an exciting line honours battle come the Rolex Sydney Hobart Yacht Race.

Anthony Bell got his big, black Perpetual LOYAL off to a perfect start, opening out a solid lead to the first windward mark after a very uncharacteristic poor start by Mark Richards on Oats; Scallywag and Beau Geste also had their problems at the start, having to thread their way at high speed through spectator boats just moments after the start gun.

Perpetual LOYAL rounded the first mark well ahead of Wild Oats XI in a fresh nor-east sea breeze, and appeared to be well in command.

And then we saw the crucial story of this race unfold.

First Perpetual LOYAL rolled out her big black Code Zero, and then it was Oats’ turn to unwrap her huge, full white Code Zero, much fuller and bigger than her rivals.  With the extra horse power, she quickly mowed Bell down, and would never relinquish the lead again.

But the revelation as far as the pending Rolex Sydney Hobart Yacht Race is concerned wasn’t the power of Wild Oats XI’s giant headsail, we all knew that already, it was that repeatedly, in this race, Perpetual LOYAL gained significantly on Wild Oats XI upwind.

“We found it very encouraging downwind, but upwind LOYAL was definitely the boat of the day today,” Wild Oats XI’s skipper Mark Richards said after the race, beside a clearly pleased Anthony Bell.

“We had a good out day today,” Bell replied. “Half the Comanche crew (from the American winner of the 2015 Rolex Sydney Hobart) have come to sail with us and they have taught us a thing or two about how to set the boat up.  The conditions didn’t really suit us today. Three or four knots less than we would have liked.

“We’ve put the boat on a diet: pulled everything out we could. But our boat is a big, powerful boat, not an all-round boat, so we have to play to our strengths.”

Perpetual LOYAL also looked faster upwind than Scallywag, though as skipper David Witt explained, the Hong Kong boat was not able to use her water ballast on the tight harbour course.

Be that as it may, Wild Oats XI may have won the SOLAS Big Boat Challenge again this year, but after a couple of excruciatingly disappointing years, Perpetual LOYAL is back.

And while this is always the day for showcasing the giants of ocean racing, the last finishing yacht, Rupert Henry’s Judel-Vrolijk 62, Chinese Whisper was the outstanding performer of the day. She may have finished behind the other six bigger, faster competitors, but she won the race on handicap by 4 minutes 50 seconds ahead of second placed Wild Oats XI.

Chinese Whisper seized the race by the throat on the first downwind leg, closing on Fort Denison behind the three super maxis, Oats, Scallywag and Perpetual LOYAL, but ahead of the 80 foot Beau Geste and the two V70s, Black Jack and Maserati. An extraordinary performance, and even though Beau Geste and Black Jack crept past her as Chinese Whisper found the deepest of holes off  the iconic old fort, the smallest boat in the fleet was roaring, not whispering.

The SOLAS Big Boat Challenge took the yachts on a 14 nautical mile course, starting off Steele Point at Nielsen Park Vaucluse, downthe Harbour to Manly for two and a half laps, taking in many of Sydney’s famous landmarks along the way, including Fort Denison, Mrs Macquarie’s Chair and the Sydney Opera House, which provides the picturesque finish line.

Full results will be found at: www.cyca.com.au/racing/entrants-results/