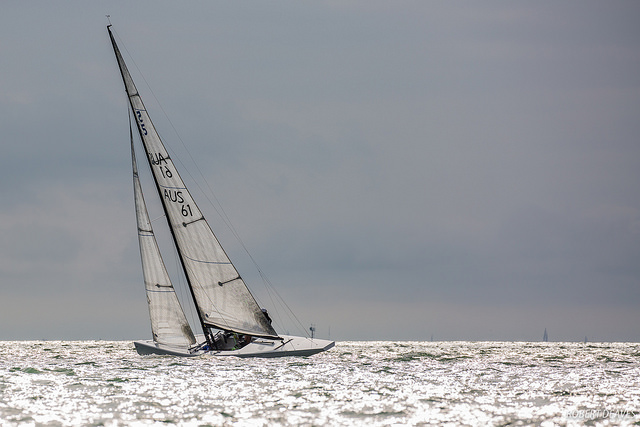 Cowes produced a complete contrast of conditions on the penultimate day of the 2018 International 5.5 Metre World Championship at the Royal Yacht Squadron in Cowes with wind ranging from 5 to 22 knots. However New Moon, BAH 21, (Mark Holowesko, Christoph Burger, Peter Vlasov) mastered both races to take two race wins and with it the overall lead with just two races to sail.

The defending champion, John B, BAH 22, (Gavin McKinney, Lars Horn-Johannessen, Mathias Dahlman) was deep in both races at times, but salvaged a fourth in the second race to stay in contention, just three points adrift.
A third and a fitth dropped Marie-Françoise XIX, SUI 218, (Jürg Menzi, Jurgen Eiermann, Bo Selko) to third, while Black & White, SUI 219, (Daniel Schenker, Mark Dangel, Anthony Shanks) sailed an exceptional day, leading both races at times and ending up with two second places, but remains in fourth overall and within striking distance of the podium.

The top of the fleet is completed by Artemis XIV, NOR 57, (Kristian Nergaard, Kristoffer Spone, Trond Solli-Saether), who sailed a third and a fourth today. These five boats are almost out of touch of the rest of the fleet with an 18 points buffer to sixth.

Just two races remain to be sailed on Friday.

The day began with a storm front passing through and a short postponement before Race 6 was started. Black & White was fastest to the top mark, but on the downwind was caught by New Moon as they rounded opposite gate marks. New Moon got the best of the next upwind and just led round the top and as the wind started to fade away, extended hugely on the final downwind for a comfortable win from Black & White and Marie-Françoise XIX. On the final downwind the wind filled in from the right and sent most of the fleet across the line in one large group.

Then there was a long wait for the second race as the wind started shifting around causing the race committee to move position three times. At the start the breeze was 10-12 knots but it soon increased and at the first mark was 15 knots, and then rose to 18-22 knots on the second upwind and final downwind which caused quite a few broaches and hairy manoeuvres.

Black & White was again first to the top mark, but Marie-Françoise XIX sneaked inside. With the top make near the main channel the current was even stronger and caught some out who hit the mark. It was very close at the downwind gate, but the next two legs proved crucial with the wind increasing further.

It was turning into a three horse race with Black & White leading New Moon and Artemis XIV into a very tight second top mark, but the downwind was decisive with numerous broaches and many boats having problems. With skipper Kristian Nergaard saying he had not broached for 20 years, Artemis XIV again broached on the run, their third during these events, and lost ground. Black & White also had a few problems, while New Moon dropped their kite early to be safe. New Moon and Black & White rounded the gate together for the final upwind. It was a very tough leg with waves, lots of shifts and strong wind, but New Moon just held on to take their second bullet of the day from Black & White and Artemis XIV.

John B was leading going onto the day and after a poor first race was also deep in the second, but good boat handling in the stiff breeze kept them upright on the downwinds and they steered through the carnage around them to cross in fourth and keep their hopes of retaining their title alive.

There was a noticeable lack of energy as the sailors gathered for the evening dock party with tired arms and heavy legs and the forecast that Friday could be even windier.

Martin Cross from the only Australian boat here had a mixed day with an eighth and UFD, but was very excited after Australia was awarded the 2020 World Championship at he class AGM this week.

“Our day was a bit up and down. The first race was quite difficult with lots of changes. We got a good start and then we got involved with other boats and we rounded quite low down the fleet. We had an OK run and we rounded with a full line of other boats and after that we had a reasonable second beat and then the second run was really good and we made some places and then picked the shifts right on the final beat. So we rounded about fifth and then we gybed early which was a bad thing to do because the wind came in from the other side with a lot of pressure and we ended up drag racing into the finish with a lot of boats on the left hand side. We lost three places, and got an eighth, but that wad good.”

“In the second race we had a discussed in the crew not to be too aggressive at the start, because it was a U flag, and somehow we went OCS.”

Cross was pivotal in Australia making a bid to host the 2020 worlds. “We were so excited last night to be confirmed as the venue in January 2020 for the 5.5 world and Gold Cup and all the events that go with that. Australia is an iconic place for the 5.5. We were central to the 5.5 early in the 60s, 70s and 80s and it’s wonderful that we now have an ever growing fleet there. We are looking so much to inviting everyone and showing them why we love sailing at Pittwater. It’s a really special location. Our club, the Royal Prince Alfred, has been around for just over 150 years, so we are looking forward to inviting the world in 2020 and having some good fun, in the land of wonder, the land down under.”

Caracole, SUI 214, (Bernard Haissly, Nicolas Berthoud, Daniel Stampfli) lie in sixth and a tenth and an eighth today. Stampfli explained, “We had a good day today with some ups and downs. In the first race we hit the right corner, and were pretty good at the weather mark, until we hit the weather mark. So we lost a little time there. And then we gained some places on the first downwind and ended up in a big bunch of boats at the finish and we don’t really know how we ended up.”

He said today was quite hard sailing, “We still have some problems in heavy air. We are pretty god in light air, but with more breeze it is ore difficult for us, with less experience, and lighter weight.”

He started sailing 5.5s in 1986. “I have been sailing with several owners and now with Bernard Haissly. I like the 5.5 because it is a three man boat. It’s a good combination. Everyone has a lot of work and the three man boat is a good solution to me, and less of a problem than bigger boats with more crew. It’s easy to transport and move with everyone in one car It’s very convenient to move around.”

He says he likes sailing in Cowes. “I like the current factor. We have been here three times with the 5.5 and two times with the Sixes and we always had a good time.”

The world championship consists of nine races, and will conclude with two more races scheduled at the slightly earlier time of 10.30 on Friday 24 August.