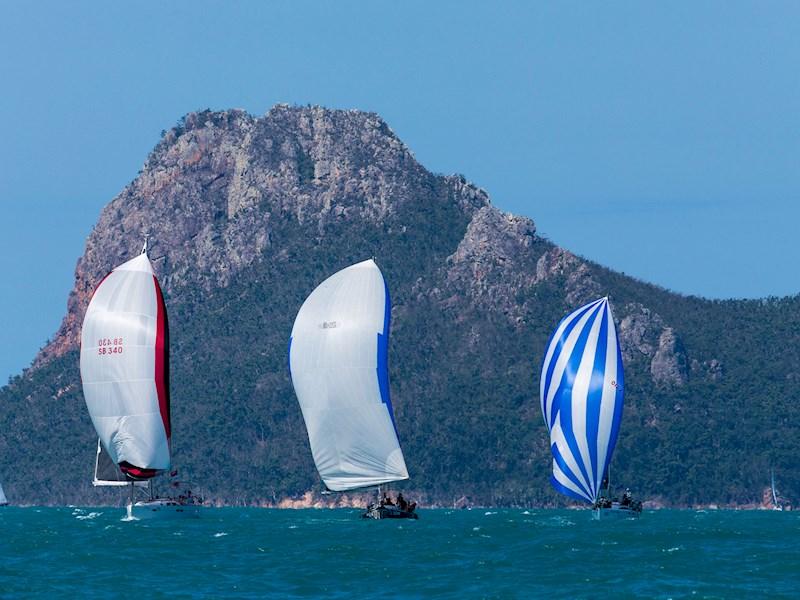 Multiple divisions at Hamilton Island Race week are going into the final race on Saturday needing those last points to cement victory, while in a couple of divisions the winners are already quietly celebrating.

Ray ‘Hollywood’ Roberts’ Fast 40 Team Hollywood wrapped up IRC Division 2 with a race to spare in the 35th edition of the annual six-day series. It’s Roberts’ third divisional win on the trot and he wonders “does that give me the lifetime option to stay at qualia whenever I like – as a reward?”

“We had a bit of everything; when it’s not our conditions we hang in there and minimise the damage, and when it’s our turn, we take advantage,” said tactician David Chapman.

Roberts said, “I think the race organisers have done a fantastic job in sometimes difficult breezes. They’ve given us enjoyable racing and a good test of seamanship due to the current.

“We made plenty of mistakes judging the tide; it’s really eyes out of the boat stuff, looking for changes on the water and seeing what the others are doing.”

Roberts believes this win is his sixth overall in division at Race Week with various Hollywood’s.

Mainsheet on Matt Allen’s Ichi Ban, Rob Greenhalgh, said on Friday afternoon: “We were all a bit nervous coming into this regatta, it being inshore racing against Hooligan which isn’t really our strength, but there’s nothing between the boats. It comes down to the basics of sailing – starting well, tacking on the wind shifts and keeping them behind you.

“It’s been a great place to race boat-on-boat; there’s so much going on and the race is never over. Today we got ahead of Hooligan behind Pine Island and then we had an amazing match race for the last hour and the boats were separated by five seconds on corrected time at the finish.”

Multihulls
Multihull racing comes in all sizes and shapes at Race Week and remarkably the competition has been very close in 2018.

In Multihull Racing Division 1, Eric Cook’s imposing Tag 60 Stardust is showing that size counts, even in more benign conditions. “For a big boat that weighs 20 tonnes we do remarkably well in light airs, with a very powerful rig and long waterline that allows us to sail deeper than our lighter rivals,” navigator Ian ‘Condor’ Smith said.

Watching Stardust rounding the top mark in race two today gave the impression that setting a spinnaker was relatively effortless: “Yes, we just spend the whole day leaning on joysticks and I’ve now got a broken fingernail!” Smith joked.

Second-placed Morticia is working hard to make a late bid for the top spot on the podium, lying only two points behind Stardust. Owner, Dale Mitchell, who took the all-black Seacart 30 to the Caribbean 600 this year, would probably prefer more of the severe conditions they experienced in that race than the continued light airs forecast for Saturday.

Morticia not only survived Hurricane Irma ensconced in her container on the island of St Maarten, but the crew managed to finish the race despite the consistent 30-40 knots of wind – one of only four of the 13 multihulls that finished the gruelling ocean crossing.

“We’ve still got some unfinished business, so we’d like to go back again someday,” Mitchell said.

The all-female Kiwi crew aboard the Crowther 40, Ave Gitaina, are doing for sailing what the All Blacks are doing in the Bledisloe Cup – winning!

Ave Gitana from New Zealand is getting plenty of exposure at Race Week and the admiration is mutual, according to skipper Sharon Ferris-Choat, who has circled the world two-and-a-half times, but has never sailed in the Whitsundays.

“The sailing here is exceptionally beautiful – and challenging – and the organisation of the event as a whole is absolutely second-to-none.”

Rod White, whose Farrier 8.2 trimaran Agape is in second position in Multihull Division 1, is hoping that the Kiwis will get distracted by the beautiful island scenery, but is also enjoying the closeness of the racing.

“The handicappers often get a bad rap, but it’s their job to keep it close across such different types and sizes of boats and I think they do a really good job at Race Week,” White said.

In the Sailing Instructions there are 40 race courses to cover every combination of wind and tide, but each year PRO Denis Thompson finds that some permutation of conditions still requires a new course or two.

And so it was today, with Courses 41 and 42 added to the list for the IRC, Multihull Racing and Hamilton Island Division 1 racing on the Eastern course to cater for an unusual easterly that was set to veer to the east/south-east. A Dent Passage start and finish had the remainder of the fleet on various courses that headed west and south using Pentecost, Cole and Pine islands as rounding marks.

The forecast for the final day is for a slight chance of a shower with winds east/north-east at 8-14 knots. Traditionally, the Lindeman Island race completes the on-water program before crews attend the awards ceremony at the Hamilton Island Convention Centre.