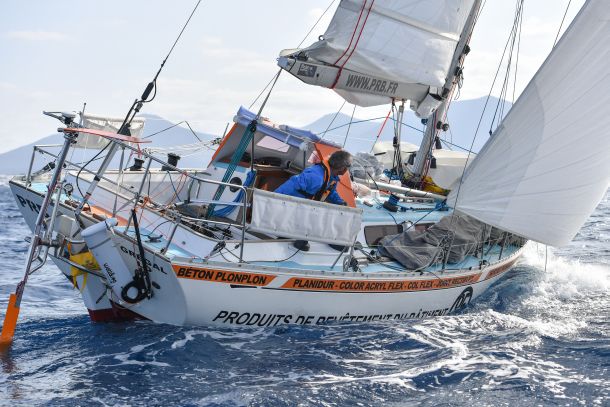 The 73-year old yachtsman, who already holds the record for the fastest West-East solo circumnavigation against the prevailing winds, got an early reminder on Wednesday of what to expect now that he is entering the Roaring Forty latitudes after sailing straight across the Agulhas Current on Wednesday. Reporting 7m high waves, he texted Race HQ: SURPRISINGLY STRONG SEA WHEN THERE IS ONLY 30KT (WINDS) MAX!

Norwegian Are Wiig (OE 32 Olleanna) and Ireland’s Gregor McGuckin (Biscay 36 Hanley Energy Endurance) trailing some 830 miles behind Matmut in 3rd and 4th place within the fleet will experience the full force of the next low pressure system this morning and the 50knot + westerly winds are predicted to overtake 2nd placed Mark Slats (Rustler 36 Ohpen Maverick) later today and drop snow on Cape Town over the weekend.

Van Den Heede’s performance to-date has been quite remarkable. He has rounded this, the first of three capes (the other major headlands are Cape Leeuwin, Western Australia and Cape Horn) some 34 days ahead of Sir Robin Knox-Johnston’s record aboard his ketch-rigged yacht Suhaili 50 years ago. In a satellite call to Race HQ this week, Jean-Luc was asked when he expected to reach Hobart, the second photo drop point in the Race. “My mind is not on that, but the finish back in Les Sables d’Olonne. I predict a return early in February.” That would make a circumnavigation time of between 210 – 217 days against Suhaili’s time of 312 days. Based on this, Race organisers are predicting the first arrival off Hobart in mid October

Ride through hell and high water! Map shows Jean-Luc Van Den Heede's passage though big seas on 23rd of August and the large arrow showing his predicted position on Saturday when 50knot + winds and a fierce flowing Agulhas Current will combine to produce 7-8m high waves.

Meanwhile, two other French sailors, Antoine Cousot (Biscay 36 Métier Intérim) and Philippe Péché (Rustler 36 PRB) will be forced to pull out of the Race on arrival in port. Both had already been demoted to the Chichester Class for those who make one stop or seek outside assistance.

Cousot, who made a stop in Lanzarote, announced on Wednesday that he was headed for the Island of Trinidade to rest shoulder and ankle injuries and make further repairs to his wind vane self steering system, before heading on to Rio de Janerio, Brazil.

Don McIntyre, the GGR Race Chairman said today. “We are sorry to see Philippe and Antoine out of the Race. Philippe has been very competitive since day 1 when he led the fleet away from Les Sables d’Olonne so we share his disappointment. Antoine has been struggling from the outset, first with self-steering problems that have continued to plague him, and now with injuries. Both will have learned valuable lessons and we hope they consider this as unfinished business and enter the next race in 2022.”

Péché, who led the race down the Atlantic, also suffered damage to his steering, but it was a call to his partner via the satellite phone reserved solely for communication with GGR HQ, that demoted him to the Chichester Class. He was warned via text message on 13th August not to use the satellite phone again, and later offered an 18-hour time penalty and remain in the GGR class because the call to his partner did not provide any real outside assistance. That could have allowed Péché to continue in the Chichester Class once he had stopped for repairs in Cape Town where outside assistance is required.

However, later investigations show that Philippe continued to use the Satellite phone. A log of his calls and messages show 40 incoming and outgoing calls and SMS messages, which he now says were required to organize his pit stop and repairs

In an exchange of text messages yesterday Péché wrote: “THAT IS THE ONLY WAY I CAN ORGANISE MY STOP IN CAPE TOWN”, followed by “IMPOSSIBLE TO ORGANIZE WITH SSB. STEERING 15H/D. U CAN DISQUALIFY ME.”

Race HQ responded: NOT DISQUALIFIED.WE CANNOT GIVE 18HR PENALTY AS 40 COMMS. WHEN U STOP AS A CHICHESTER U R OUT. YOU CAN CONTINUE IN CAROZZO CLASS ONLY, WITH GGR SUPPORT. ALL THE BEST…GOOD LUCK

The rules for this retro race marking the 50th anniversary of the first Sunday Times Golden Globe Race are clear. Competitors can only use equipment that was available to Sir Robin Knox-Johnston and other competitors in 1968/9 to navigate and contact the outside world. That means using SSB and Ham radios for long-range communications, and VHF for short range (up to 30 miles)

The official ruling reads:
On Thursday 9th August Philippe’s Beaufort wind vane became inoperable with a break that was impossible to repair onboard. On Friday 10th August the yacht's tiller onboard broke approx. 20cm from the rudder. Conditions had been 40-50kts winds from behind. Philippe decided to call GGR HQ via the Race Sat Phone to report the damage and notify that he would lay a hull for the night and attempt to make repairs in the morning. He then stated that he would call his partner on the same sat phone, saying… ‘I AM NOT WORRIED ABOUT THE CONSEQUENCES’

GGR declared this was NOT a CODE ORANGE under the Crisis Management Planning, so notice was NOT passed onto any of the Marine Rescue Coordination Centres. Instead, GGR management passed information to next of kin and continued to monitor the situation closely. The weather moderated quickly. The yacht’s rudder, hull and rig were sound with all safety gear intact and all satellite comms. operational. The following morning Philippe made a jury repair to the tiller from parts onboard, declared he was bound for Cape Town and continued sailing, making good speed.

RULES APPLICABLE in NOR.
3.1.4: A skipper may only contact the GGR Control by GGR Sat Phone or YB3 Texting during the voyage and may NOT use these to contact any other party except in an Emergency.
3.1.12: Failure to comply with any one of these rules, will lead to the skipper having to abandon the Race.

FINDINGS
Philippe Péché called GGR HQ to report temporary loss of control of his yacht. He did not ask for assistance and confirmed that he was OK and would make repairs in the morning. This was NOT a DISTRESS or a PAN PAN situation. Philippe wanted to notify GGR of his situation and change in satellite tracking, and to alert GGR of the challenges ahead. He did NOT declare an emergency.

All Entrants have been advised in documents and briefings that the GGR Sat Phone can be used ONLY in an emergency to call any rescue authorities for assistance. Philippe’s assertion that it was an emergency and therefore he could call his partner is not supported by the GGR on two levels.
1. This incident was NOT declared an emergency by GGR and No assistance was requested or given. Philippe did not declare an emergency and had not called any Rescue Authorities.
2. The intent of Rule 3.1.4 relates specifically to emergency situations and refers to calling anyone who can assist in such an emergency. It does not refer to secondary calls to family or managers while under racing rules. The fact that Philippe stated he was NOT WORRIED ABOUT THE CONSEQUENCES indicates that he knew he should not make the call.

Philippe has clearly breached rule 3.1.4. Rather than apply 3.1.12, his move to Chichester Class was determined.

A time penalty of 18 hours was considered to bring Philippe back into the GGR class, but not approved as subsequent investigations show that Philippe has been using the GGR Sat-Phone since August 10th for regular and frequent incoming and outgoing calls and SMS messages. As a result, his stop in Cape Town will mark a second penalty forcing his retirement from the GGR.