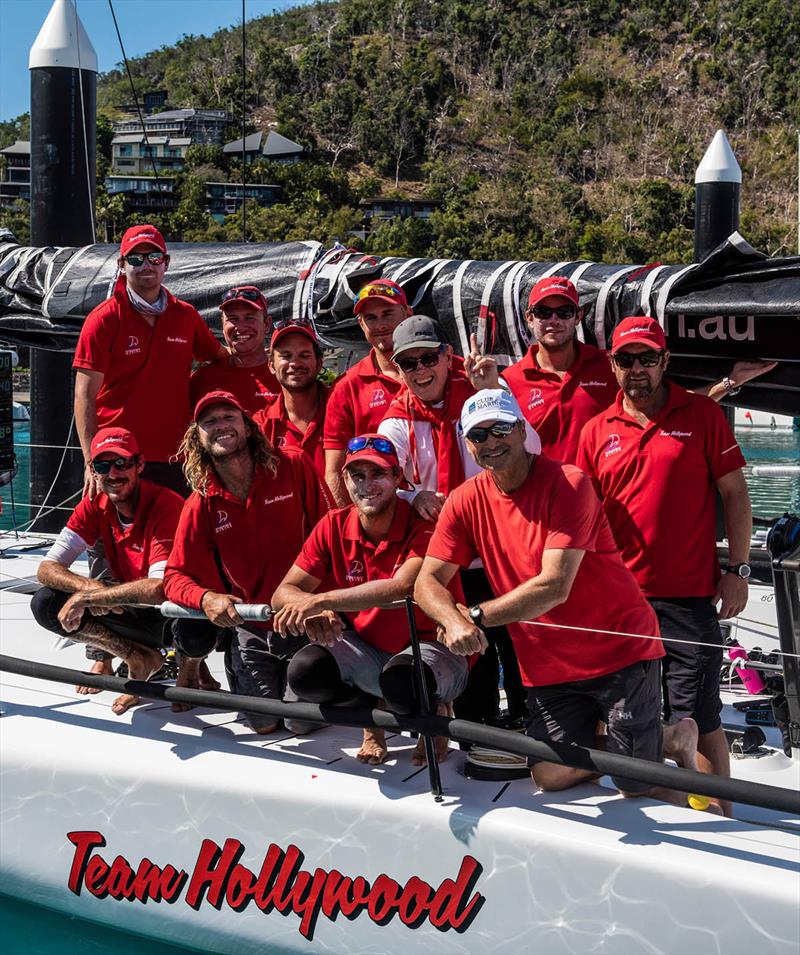 Fifteen divisions, 233 boats and close to 2,000 sailors from Australia, New Zealand and around the world spent Hamilton Island Race Week in the Whitsundays dashing around tropical islands with only saltwater hitting the decks, until the final afternoon rainstorm offshore broke the sunny and dry winter spell.

South-east trade winds built to their peak of 25 knots on Monday and close to that number the following day.

Layday on Wednesday was ideal pool and Whitehaven Beach weather with little breeze and cloudless skies, and the second half of the week brought lighter east-south-easterly winds between 6-12 knots on average, and just the one shower in the closing hours of Saturday.

The super maxi battle required an on-water umpire to be brought in on day four of racing to monitor the pair.

The Oatley family's Wild Oats XI (HIYC) convincingly beat Peter Harburg's same-length Black Jack (RQYS) in terms of first over the line results. Now both crews return home to mull over where a few more seconds-per-mile can be teased out before the December ocean classic, the Rolex Sydney Hobart Yacht Race.

A six-day arm-wrestle between the TP52s resulted in Marcus Blackmore's Hooligan (RPAYC) scooping the IRC Division 1 prize from Matt Allen's Ichi Ban (CYCA), with a day to spare.

“We set a plan last year to win Hamilton Island Race Week,” Blackmore said prior to the final islands race, a new course out around Baynham Island to the south-east of Hamilton Island.

“We bought a boat from the Roemmers family in Argentina that had won the TP52 Super Series and set a goal. It was an emotional day yesterday; there's been a bit of argy bargy between us and Ichi Ban,” Blackmore admitted.

“We've been match racing all week; I don't know how many tacks we've done this regatta and to ultimately win is pretty exciting.”

Team Hooligan added yet another victory to the owner/skipper's tally, which includes the arbitrary division win at the first Hamilton Island Race Week way back in 1984.

In between the 100-footers and TP52s, Phil Turner's RP66 Alive (DSS) finished third overall and banked some crucial time on the water as part of their Sydney Hobart warm-up.

IRC Division 4 top place went to Graham Furtado's X41 Matrix from Queensland and he and all the division winners will gather at Hamilton Island's Convention Centre this evening for the gala awards ceremony.

A word from the Regatta Director Denis Thompson:
“We were able to race every day in a combination of light to medium to heavy winds. It's always tricky because of the wind and tide. The team worked hard to come up with courses and shorten when we needed to.

“I think there's good camaraderie around the fleet. Hamilton Island divisions have worked. Maybe we'll look at splitting into another division as some divisions were quite big, and to separate the racier boats,” Thompson added.