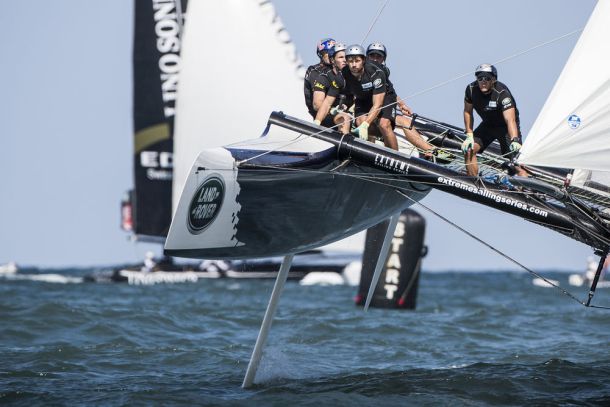 “We were consistent today as opposed to yesterday. We had solid starts, good decision-making and generally it was a great day. Yesterday we learnt a lot – we will bank that to avoid the same mistakes”, explained tactician and two-time British Olympic gold medallist, Sarah Ayton on the dock after racing. “I think tomorrow it will come down to the very last race so we will take it one at a time, try to maximize the points and I am sure it will be a great final showdown.”

The pressure has now shifted to Danish SAP Extreme Sailing Team who, despite keeping their averages up all day, relinquished their hold at the top of the leaderboard. After racing, tactician Jes Gram-Hansen admitted, “You have to put your hands up and say The Wave, Muscat sailed a great day and we struggled a bit but I think we survived the day. We are still sitting comfortably in second despite loosing some points to Red Bull. Today was the first time this year for reaching starts this year and that it very difficult, so that is something for us too look into.”

In seven knot breeze and choppy seas – the remnants of the previous days storm – the Austrian Red Bull Sailing Team held a consistent score line, including three race wins, adding an important 66 points to their tally, and the team are now up to third place – despite having to deal with the absence of skipper Roman Hagara, out with an elbow injury. “We are fully satisfied with three wins,” said tactician Hans Peter Steinacher, who took over as skipper from Hagara for the day. “Teamwork was excellent although two early starts should never happen. Tomorrow it is all about the podium and I think we can still cause a sensation.”

Just shy of the podium by two points, Oman Air, with one of the UK’s top 49er sailors Stevie Morrison in the driving seat, are poised and ready to pounce – with a 30 point buffer over the chasing pack. Dockside Morrison spoke about the future of Extreme Sailing, getting fired up and ultimately hitting the podium – watch the video here.

Leading the second half of the leaderboard, Team Turx powered by Kaya Ropes had their best day of the season so far, with four fourth place finishes. The fastest on the startline according to the SAP Sailing Analytics, the team are really starting to show their potential amongst the more experienced fleet.

GAC Pindar are just five points ahead of Lino Sonego Team Italia in sixth and seventh place respectively, while Gazprom Team Russia came out fighting following yesterdays gear failure that saw them miss half a days racing, and posted a first, second and third in todays results.

With the points so tight at the top and conditions set to get light and shifty, the Extreme Sailing Series Act 2 Muscat could still be won or lost in a race. Tune in and watch the racing live: www.extremesailingseries.com/live.