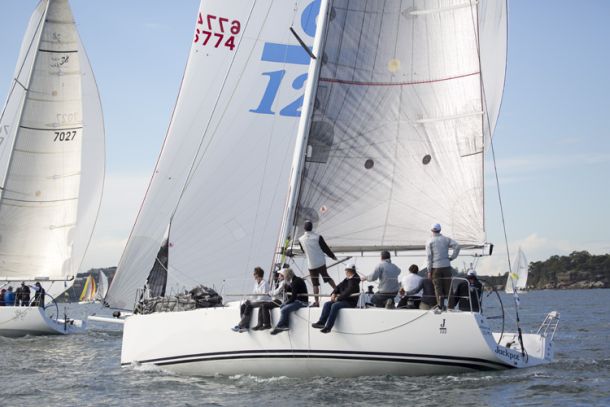 Jackpot is on a winning streak. Photo credit www.sailpix.com.au

Adrian Van Bellen's winning streak with his fittingly-named Jackpot continued today when the J/122 yacht took out the Lion Island Race, the penultimate race of the Cruising Yacht Club of Australia’s Ocean Point Score (OPS) which started on Sydney Harbour at 10.00am today.

Looking ahead at predicted light 5-6 knot winds, Van Bellen made a decision that may have made the difference between winning, or not. “I decided to sail with eight people instead of the usual 11,” he said. “We were very busy.”

Surprised when told of his win, the CYCA sailor said: “It was hard getting out of the Harbour, but once we got outside and turned the corner, we got into a groove. Coming back from the Island was wonderful. It blew mostly easterly 12-17 knots and we reached until Long Reef and then ran all the way to the finish – beautiful sailing – but I can’t believe we won.”

Van Bellen commended his crew and two in particular. “Carl Crafoord and Hugh Brodie – they have something like 60 Hobarts between them (Crafoord has 29 and Brodie 26). They are so inspirational, especially to me who is still learning. And my boat is also special.”

Jackpot’s crew were celebrating their win back at the CYCA tonight, where Van Bellen was praising Julian Farren-Price who finished second overall today by just under  three minutes on corrected time. It leaves the jeweller just one step away from collecting a fifth consecutive OPS title and ninth out of the last 11 with his Cookson 12, About Time.

“It is so hard to beat About Time. I’m not going to get carried away with beating that gentleman (Farren-Price); he has such a fine reputation. I think we got a bit lucky where he is concerned,” Van Bellen said of About Time which is currently 16 points ahead of nearest rival, Balance, the TP52 owned by Paul Clitheroe. Steven Proud’s Swish is a further seven points behind in third with one race left in the series.

The Lion Island race was a vastly different scenario to the previous race from Sydney to Newcastle in February, where not one yacht finished after competitors struggled in light air and Balance came to within a whisker of finishing.

The final race of the Ocean Point Score is next weekend’s Sydney Wollongong Race starting at 10.00am.