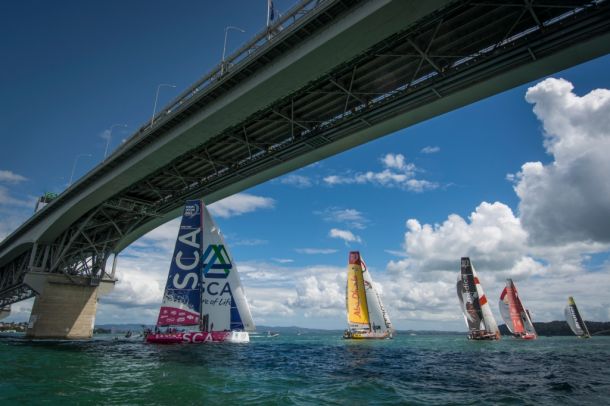 AUCKLAND, New Zealand, March 13 – Cyclone Pam caused another postponement for the Leg 5 departure of the Volvo Ocean Race as organisers announced on Friday that the fleet would not now leave Auckland for Itajaí, Brazil, until Tuesday at the earliest.

The cyclone has already racked up winds of 200km/hr causing a delay in the departure in the six-strong fleet which was originally due to embark on the 6,776-nautical mile (nm) journey on Sunday (March 15). It was on a collision course with the fleet shortly after they were due to leave the New Zealand city.

Race CEO Knut Frostad told a press conference in Auckland on Friday that there was no choice but to hold up the start of a leg, which was already likely to be the toughest in the nine-month, 38,739nm marathon event. He had previously announced on Thursday that it would not leave until Monday at the earliest.

“This weather is very rare for the race, and for New Zealand. We will not start the leg until Tuesday and will probably look at an afternoon start or in the evening. That’s our current plan,” he said before adding that organisers would give a final decision by 1800 local time on Sunday.

The fleet’s skippers in the press conference backed the decision to keep the fleet in port for at least an extra two days.

“It’s obvious,” said Team Brunel’s Dutch skipper, Bouwe Bekking. “All the skippers in our meeting said straight away, ‘you’ve got to delay it’. A very good decision.”

The race emphasised that the New Zealand Herald In-Port Race was still scheduled to go ahead on Saturday (March 14) at 1400 and they hoped that a sizeable audience of Auckland’s sailing-loving residents would attend.

Additionally, they plan a similar length, in-port race for charity on Sunday at 1400 local time, when the winners will be awarded NZ$10,000 by the event, which they can donate to a cause of their choice.

Frostad emphasised that with Cyclone Pam bearing down on Auckland, that event was subject to cancellation, but was an attempt to give the city’s sailing fans and sponsors an extra dose of action. A final decision will be made no later than 1800 on Saturday.

“It’s on the borderline of what we think is safe and prudent to do but we’ll continue to monitor the situation.”

The skippers, meanwhile, are relishing finally taking on the most challenging stage of the race, which will take them through the Southern Ocean, past Cape Horn and then the Atlantic to Itajaí in the southern Brazilian state of Santa Catarina.

“It’s the best sailing we can get – the waves, the nature. They will be moments when you hate to your guts being out there but it’s the highlight for most of the sailors in the race,” said Bekking.

Enright of Team Alvimedica added: “The race itself is a personal proving ground and this is what the Southern Ocean represents.”

Ian Walker’s Abu Dhabi Ocean Racing crew could be forgiven for feeling more trepidation than most after finding themselves one of several boats in the leg in the last edition in 2011-12 to enquire about emergency assistance.

“We got a message back saying that the nearest ship was 1,000 miles away. That kind of focuses the mind. If you run into trouble in the Southern Ocean, the chances are that help would come from one of the other boats in the race,” he said.

He is one of several skippers who have been forced into changes for the leg. The race’s only Emirati sailor, Adil Khalid, has been advised by race doctors that he is not fit to sail with the overall race leaders after suffering from a virus.

Bekking has lost his experienced bowman Laurent Pagès (FRA) for the leg after he tripped over some steps and broke two ribs on a trip home. “He wasn’t going to tell us but he could hardly walk,” said the Team Brunel skipper.

Team Alvimedica are using one of their experienced pre-race mentors, Stu Bannatyne (NZ), who has six Volvo Ocean Races under his belt, while Dongfeng Race Team’s Caudrelier has called upon the services of Irishman Damian Foxall.

The latter pair helped Groupama win the last edition in 2011-12.

Team SCA (Sam Davies/GBR), meanwhile, are able to recall their talented bowman/driver Sophie Ciszek (AUS) who returns after missing the last two legs following a Christmas Day operation on a back injury.

MAPFRE may well be the team to beat. They won the last leg from Sanya, China to Auckland, without their usual skipper Martínez who has been preparing his bid for a second Olympic gold in Rio next year.

Their stand-in, Xabi Fernández, delivered a fourth place and a win in his absence, but Martínez assured the press conference that he was fully focused and raring to go on his return.

“I was still working very hard for the boat even when I wasn’t sailing,” he said. Missing the two legs had, he said, given him a useful perspective for reviewing his crewmates’ performance from afar.

Davies said her all-female crew had a particular incentive for reaching Itajaí in one piece and as quickly as possible. “Several of the crew are looking for husbands and feel that Brazil is a good opportunity for them,” she smiled. “We’ll be going as fast as we can.”