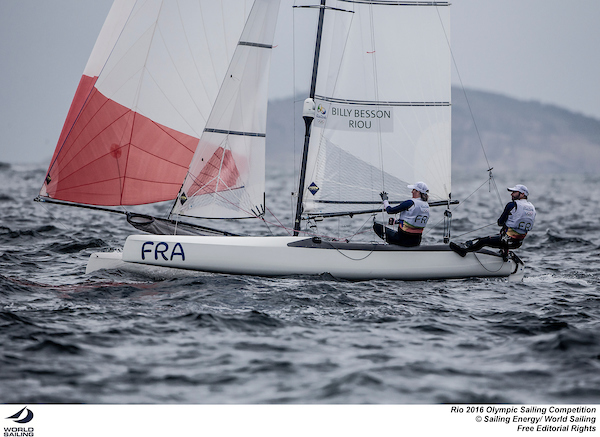 It was a good day for Australia on the Rio Olympic sailing courses and nowhere more so than in the Nacra 17 competition.

Young Sydney cousins Jason Waterhouse and Lisa Darmanin won two of the four races sailed today and sit at the top of the heap , tied with Ben Saxton and Nicola Groves of Great Britain. These two crews kept each other in sight most of the day which was sailed in challenging conditions.

“It was busy out there!” said Lisa. “There were big wind changes and big shifts. We sailed very well today and we're very happy. We've been training here for three years and we've never seen it like this, but it's not all that different to a Sydney westerly so we felt right at home.”

As if evidence was needed of the effort required to keep these catamarans upright, When the racing was done Lisa asked her cousin to give her the tiller as she had no strength left to trim the sails on the way in to shore.

Jason said it was a day when you couldn't manage the fleet but rather had to spend total effort on just managing the boat. “Lisa kept it going fast while I had my head on a swivel,” he explained.

One sad aspect of the Nacra competition is the injury to the class's only world champion, Billy Besson of France. He and Marie Riou have won all four world championships since the class began in 2013 and were the strong favourites to take the Gold. However, a disk problem in his spine has debilitated the Frenchman and he has had to take recourse to a wheelchair at times just to get around.

After six races, the pair has just two single-digit scores and just looking at him you can see he is in great pain. Waterhouse and Darmanin are the only crew to have beaten the French at a major competition, winning the test event on this Olympic course last year.

Jason Waterhouse said that injury is a fact of life in the high-speed cats and it is very unfortunate that it has hit Billy Besson now. But he says French legend will fight through the pain and keep racing, even if he is not at his usual high level.

“He will die before he stops racing. He's a beast!”