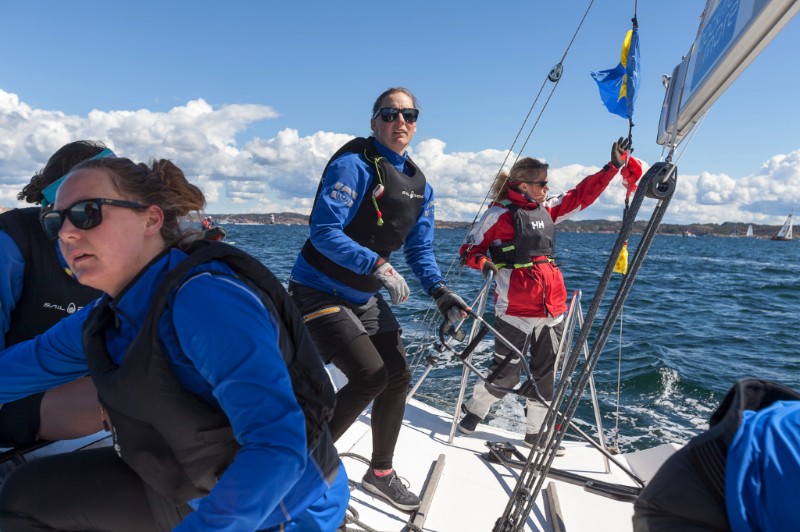 In excellent sailing conditions with bright sunshine and perfect winds, Thursday’s racing offered an exciting conclusion to the round-robin of the second round of Women's International Match racing.

Not until the very last match of the day, Camilla Ulrikkeholm Klinkby (DEN) secured her top spot by beating local hope Anna Östling (SWE). That gives the Danish skipper the advantage of picking her opponent for Friday’s quarterfinals: “we really have to think this over. To be the one choosing can actually be a little dangerous” she smiles.

The storm from the beginning of the week was gone and forgotten, as large crowds came to the rocky shores of Lysekil, Sweden, to follow the conclusion of the round-robin. Out on the sunlit water World #1 Camilla Ulrikkeholm Klinkby and fellow club member of the Royal Danish Yacht Club in Copenhagen, reigning World Champion Lotte Meldgaard, excelled with the best performances of the day.

Both Danish teams showed very solid sailing, being alone not to lose even a single match. A nothing but fantastic score, that took them all the way to the top of the scoreboard: “our match against Anna (Östling) was a really tough one. She always takes us to the most hectic level, and we certainly got our excellent boat handling and crew work confirmed” says Ulrikkeholm Klinkby, who won the round-robin with eight wins and just one loss.

“We’ve had a really pleasant day, with calm and clever sailing, despite shifting winds, current, puffs and rocks to consider. I’m especially pleased that our starts worked very well today” Meldgaard sums up their round-robin performance.

With her loss in the very last match against Ulrikkeholm Klinkby, and her defeat to American Stephanie Roble in the match before, former leader Anna Östling finished her round-robin on a 7 – 2 score, tied with Roble and Meldgaard. As the umpires broke the three-way-tie, the Swede fell back to fourth place: “in the last two starts we didn’t get the timing right, and that cost. But it’s better to make that kind of mistake now, so we can learn and get back. We’re looking forward to the quarterfinals” says Östling.

Stephanie Roble, consequently finishing in third place in the round-robin, was very happy with her Thursday on the Swedish west coast waters: “we’ve tried to accomplish a lot of goals on our way to the obvious and ultimate goal on Saturday, learning as much as we can from situations during the week” she explains.

The quarterfinals of Lysekil Women’s Match will be sailed Friday, followed by semi finals and final Saturday.