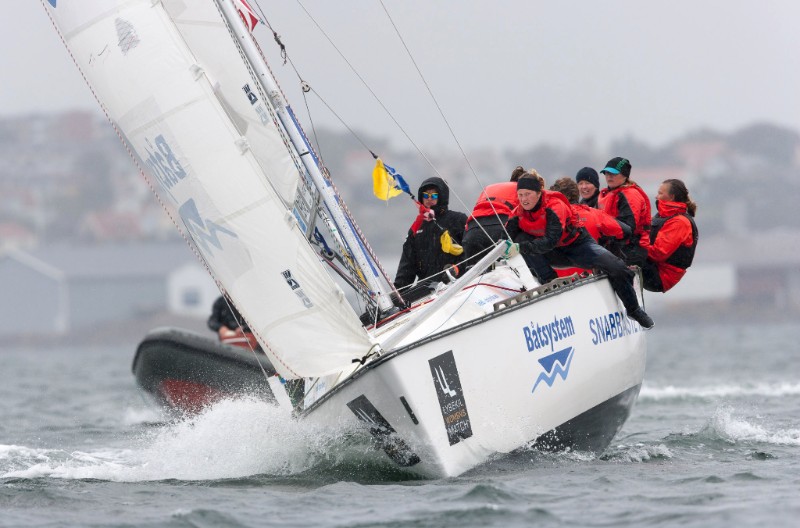 The Swedish west coast offered a fresh breeze and heavy rain as the quarterfinals of Lysekil Women’s Match, the 2nd event on the 2016 WIM Series, were decided Friday. All quarters finished 3 – 0, but the winners agreed that it was a bit harder in reality than the scores may look on paper:

Unfortunately, at least from a Swedish point of view, Östling had to face fellow club member from the Royal Gothenburg Yacht Club, Caroline Sylvan, in her quarterfinal. They were actually the only ones left, when the top seeds after the round-robin had picked their favourite quarterfinal opponents:

“If we want to go all the way, we have to race whomever we get” Östling notes.

Young Swede Johanna Bergqvist was the only skipper to beat round-robin winner and World #1 Camilla Ulrikkeholm Klinkby in the round-robin, but despite that triumph she was picked as the Danish team’s quarterfinal opponent:

“Johanna did a good job sailing the boat, but we could see in the prestarts that they need more experience, to avoid getting caught” Ulrikkeholm Klinkby says.

Tomorrow the Danish five-time Lysekil winner will try hard to add yet another title, but whom she will decide to meet in the semi is still a secret:

“We will thoroughly think that over before we make our choice tomorrow morning” she laughs, adding that they only have smaller adjustments in crew work and boat trim to make.

Reigning World Champion and fellow club member of the Royal Danish Yacht Club, Lotte Meldgaard, follows Ulrikkeholm Klinkby to the semis. Meldgaard led two of her quarterfinal matches against Pauline Courtois (FRA) from start to finish, but it was tougher at the beginning of the second match:

“Pauline won the start and we stayed behind until the leeward mark rounding, where we were able to pass her. I think we had generally better boathandling, being able to extend our lead further” says Meldgaard, who is confident approaching the semis.

“We know we can win, but we need to take one match at a time and make no mistakes, because otherwise we’ll be punished immediately.”

“It was a wet and windy day, but we’re really happy to check yet another box on our way. Boat handling and communication worked very well, and we’re confident going into the semi finals. All semi finalists are very good, but we’re ready to race whomever. We’re looking forward to an exciting Saturday!”

The semis and the final of Lysekil Women’s Match will be sailed Saturday, immediately followed by the prize giving ceremony.

Results in the quarterfinals of Lysekil Women’s Match, the 2nd event on the 2016 WIM Series: