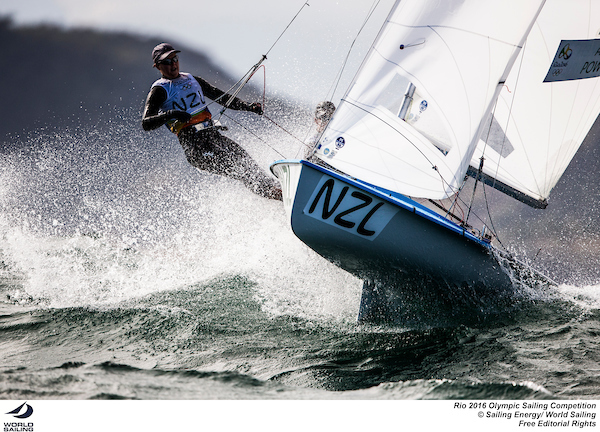 Polly Powrie on the wire of the 470 at Rio 2016. Photo Sailing Energy/World Sailing.

While all around them were losing their heads, London 2012 Silver medalists Hannah Mills and Saskia Clark kept theirs. With unpredictable winds appearing and disappearing around the course, they put themselves in the right place at the right time and now lead the competition by three points after winning the only race of the day.

The Japanese crew has been consistent for most of the regatta and they hold joint second place with the French. With only half the qualifying races sailed, however, there is plenty of time for the whole leaderboard to change dramatically.

The Olympic champions Jo Aleh and Polly Powrie of New Zealand certainly hope so, after losing a protest over a port/starboard on the first day and recording an ucharacteristic 12th place today, they find themselves back in sixth spot but only six points off the lead.

Carrie Smith and Jaime Ryan of Australia had their best race of the regatta, finishing seventh today. That leaves them in 11th place and they will be working hard to gain a position in the medal race.