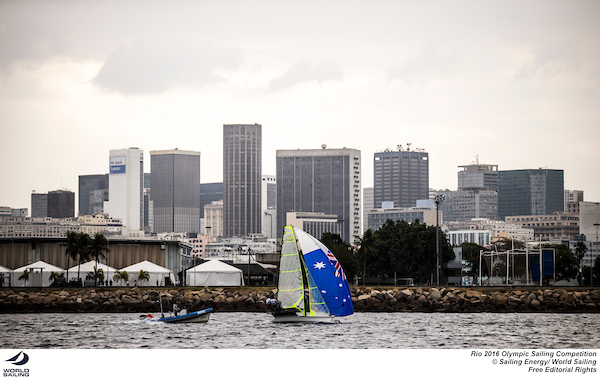 Undefeated until a few weeks ago since they won the Silver medal at London 2012, Peter Burling and Blair Tuke have obviously put their loss in the South American championships behind them.

After a poor start in the first race of the 49er competition, their first run was sensational and they moved right up on the leading Danish crew. When the Danes made a simple mistake at the final gate (in normal 49er competition the finish doesn't involve a reach to an extra mark) the Kiwis swept past to record the victory.

In the second race they repeated the dose, only this time more emphatically. Again off the line slowly, they were forced to tack by Nathan Outteridge and Iain Jensen, but then went into better breeze and lifted through the fleet. The pair of bullets already has them six points clear of second-placed Portugal.

“We're happy to walk away with two good scores. We made sure we didn't do a anything massive,” Burling said.

While the Kiwis managed to make the most of the stronger wind areas, defending champions Outteridge and Jensen seemed to find all the wind holes. “We just didn't get it right,” Outteridge admitted, “A lot of it was about the first minute or two and we just missed the best spot and were never able to get back into it. Our strategy was not to risk too much and today was probably a day when you needed to take a risk. It's not a boat speed thing, we just weren't able to get in the right spot.

Commenting on their 11th position, 19 points behind the Kiwis, Outteridge said, “We haven't lost the event yet but we could have made it easier.”

The 49erFX was on debut and with no Australian competitors and time getting away, let me just say that no crew stood out and there are six crews within two points of the leaders Canada. Full results are available here.