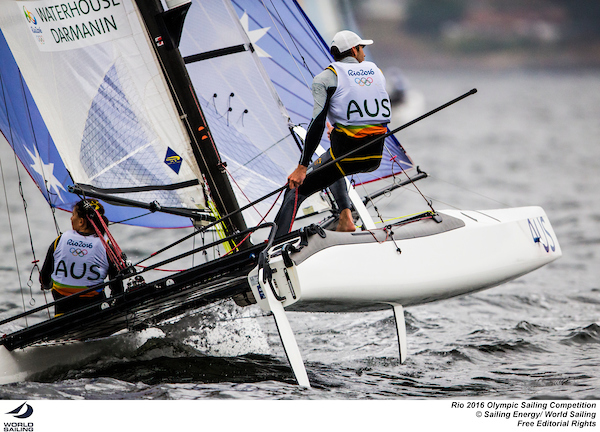 Jason Waterhouse and Lisa Darmanin (AUS) made a good start on the opening day of the Nacra 17 in Rio. Photo Sailing Energy/World Sailing.

ISAF (as it was called then) made a massive blunder when they dropped the Tornado multihull from the Olympic sailing schedule after Beijing 2008. But admitting their mistake, they chose the Nacra 17 for these Rio Games and the decision was vindicated in spades as the mixed crews wowed the crowds in variable conditions on the medal race course.

There were spills and thrills, a massive pile up at the bottom gate in race one, rudders were knocked off and the Jury is sure to be busy tonight, so any places I quote are subject to change.

“Insane but a bit of fun” was how Australia's Lisa Darmanin described her first day of Olympic competition with her cousin, Jason Waterhouse, on the helm.

Like all crews today, the Aussies position in the fleet fluctated wildely, at one stage rounding a mark in second place before dropping towards the back and surging up into contention again. They finished the day with a sixth and an eighth and sit in fourth place, one behind the super-experienced Santiago Lange and Cecilia Carranz Saroli (ARG).

The two crews tied in first place on eight points, Matias Buhler/Nathalie Brugger (SUI) and Ben Saxton/Nicola Groves (GBR), generally stayed out of trouble and sailed in their own air. The Swiss won the first race and the second was won by the local team of Samuel Albrecht and Isabel Swan.

Perhaps the surprise of the day was the performance of the French pair Billy Besson and Marie Riou. They have won every world championship since the class began in 2013 but sit down in 17th place on 26 points. As Nick Thompson has shown in the Laser, a bad start is no real impediment in the long run and we will expect to see them move up tomorrow.

However, there is a rumour circulating that Billy has a bad back, which could be impairing his usual superb ability to make a multihull go fast around the course.

The Nacras were supposed to sail three races today but constant wind shifts on the medal race course made it impossible for the officials to get the third one started before the cut-off time of 4.30. It gets dark in Rio at around 5.30pm at this time of year – or even earlier on grey days like this one.