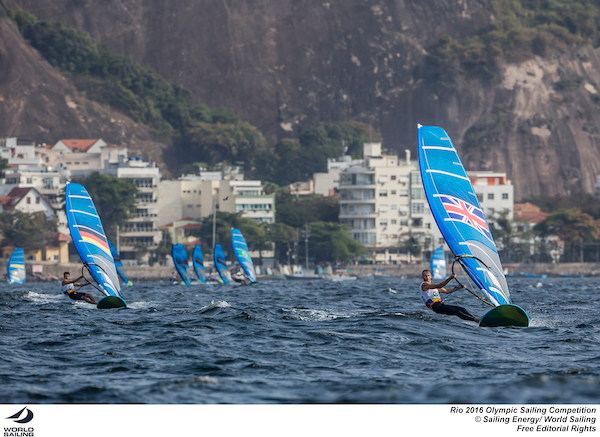 It was a great day at Rio 2016 for an Italian windsurfer with an Australian connection. A former partner of London Laser Gold medallist Tom Slingsby, Flavia Tartaglini has a lot of friends among the Australian sailing community. We were all pleased to see her record two bullets and a fourth to take a one point lead over Charline Picon of France.

Tartaglini commented, “I was not expecting these good results, to tell you the truth. I was feeling ready, but in others regattas I have also felt ready and then things have not gone so well. I'm trying to go day by day and race by race. We still have more than the half of the races to finish the Olympics, but at least this evening I'm going back home very happy.”

As to her growing rivalry with the French sailor, Tartaglini observed, “Charline was leading yesterday and today she was behind me in all three races. But that means just that today I have had a good day. She's one of the strong contenders, so maybe I'm also one of them. Today was my best day, I hope I will continue in this way. I have the speed and I have the training, and we are all there in the fight.”

In light and difficult conditions that required pumping, the first four are beginning to put a gap between them and the rest of the fleet.

Stefaniya Elfutina, who earlier in the year won the Youth Worlds, is five points behind Picon and Lilian de Geus (NED) is a further two behind.

“I'm young, yes, I'm 19 years old,” said the Russian. “But I think that's not a problem to be able to fight for the medals together with the most experienced women. Nobody expects anything from me, so I just do what I love, and sometimes I can do it well and be in the fight.”

It is tight at the top of the men's fleet after defending champion Dorian van Rijsselberghe (NED) hit back with two bullets to finish the day. He and Britain's Nick Dempsey have each won three of the six races and Dempsey leads by a single point in the overall standings. However, he has lodged a protest claiming interference at a mark rounding which caused him to fall off his board. His points position would improve if the protest is upheld.

“Good day today, with a four and two firsts,” said van Rijsselberghe. “I've been lucky! Sometimes lucky and sometimes good. Everything is going well, we have done six races so we are not at the halfway point yet. But I'm feeling good, I'm happy about today and just need to try to keep going like this. With the wind dropping throughout the afternoon, it was physical day of pumping the sail to keep the board moving. The last race was almost unraceable. But it is what it is.”