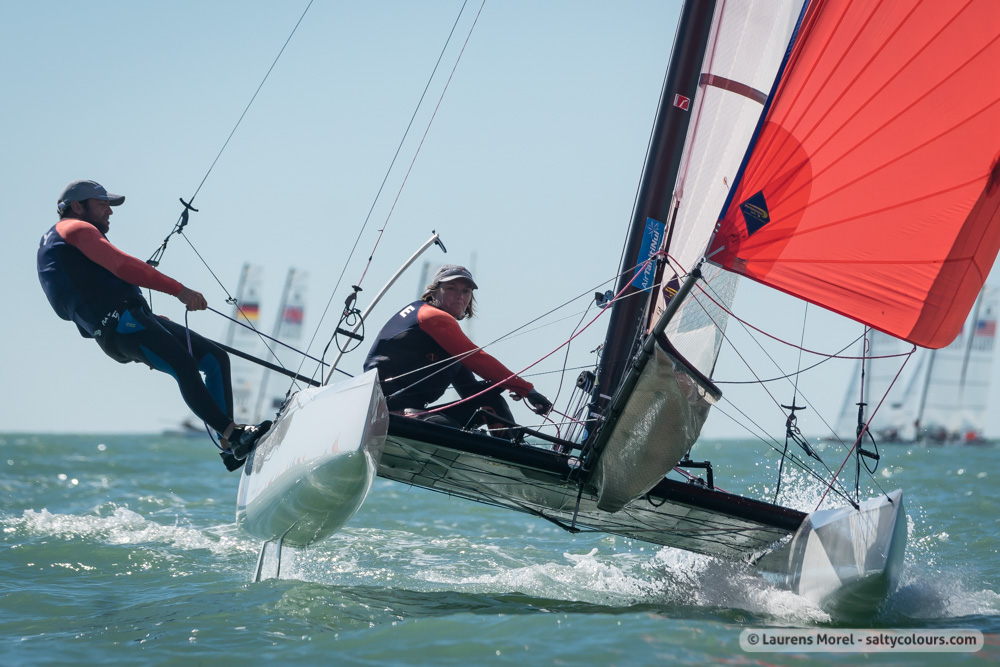 Jason Waterhouse and Lisa Darmanin made the best of a light airs day three at the Nacra 17 Worlds to move to 3rd overall after the young Australians scored 5,4,1. It was a long day on the water, almost six hours, so maintaining concentration was difficult, but absolutely key.

“Day three was a really good for us and we sailed a consistent day. It was quite soft and variable out there so we just used that to try and gain some points from the few errors yesterday,” Jason Waterhouse said.

With a big shift in wind conditions and sea state it was all about adjusting the equipment accordingly and using the right finesse on the boat as Jason Waterhouse explains: “You just have to set up the boat a bit differently, the rig and the foils. We also had to change the way we sailed and needed a bit more finesse on the boat to keep it going fast. There was still a bit of left over swell there from yesterday so you still needed technique and the groove. But Lisa is sailing really well, keeping the boat go forward and that allows me to make good decisions.”

The pair’s current point score could still be bettered should the pair be successful in results enquiry they have put in about an OCS in Wednesday’s racing.

According to Jason Waterhouse, after a premature start they did go back to re-start and he hopes the result to be corrected after providing video evidence to the jury.

The Italian crew of Vittorio Bissaro and Silvia Sicouri also did well, moving up to 2nd overall with 3,10,2. Bissaro was rightly pleased with his team’s performance. “Boatspeed was critical today, and we were fast so that made life easier,” he said. “So far at these Worlds we have had a big variety of conditions. Every day is different, so it's a fair battle across many different types of wind.”

Normally the Australian and Italian performances would be enough to close the gap on the leaders, but the leaders are the three-time World Champions Billy Besson and Marie Riou who appear unstoppable in the Nacra 17 right now. Scores of 4,1,3 have helped to build a lead of 25 points over the second-placed Italians, so it seems likely the French will go to the Olympics as winners of all four World Championships in the young life of the Nacra 17 class. Not that Bissaro is seeing things that way.

“Billy is doing better races than us at the moment, but we have everything we need to be in front, we are confident.”

Denmark’s Allan Norregaard and Anette Viborg Andreasen slipped from 2nd to 4th with a ho-hum day, but they’re still not far away from the podium. Norregaard knew what he needed to do, it was just hard to execute in the light winds and choppy water. “Sail free, find your own space, because as soon as you were close to other people it was hard. Finding your own lanes was important.”

Tom Phipps agreed with that assessment, and together with Nicola Boniface finds himself leading his more experienced British team mates. Scores of 6,5,21 have lifted the young Brits to 7th overall.

“A good day in messy conditions,” said Phipps. “We were able to find a lane to use our boatspeed. So often you're caught on the back of someone else, just being held up in one direction or other, but we found lanes that enabled us to optimise the boatspeed.”

The young crew are sailing way above expectations, and aren’t considered serious prospects for Rio 2016 selection, although if they were to carry on like this they will be hard to ignore. “For us, Nick and I started sailing together almost exactly a year ago. It's been a baptism. It's been a battle against a lot of things, and it's nice that everything is falling into place now. It bodes well for the future.”

Tomorrow’s breeze looks set for a moderate south-westerly breeze, which should suit the Nacra fleet nicely.