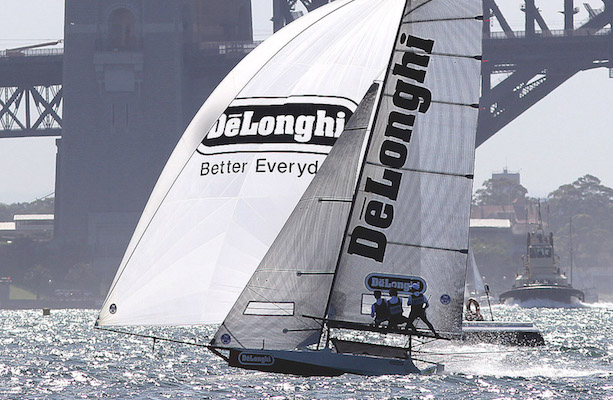 Four of Australia’s best 18ft Skiff sailors recently teamed together on the Ragamuffin 100 maxi which finished  2nd, behind Comanche, in the 2015 Sydney-Hobart Yacht Race.

The foursome had to endure some treacherous conditions on the first night of the classic ocean race and the bond between within the group was undeniable as they battled the elements – the likes of which they hadn’t previously experienced.

Ragamuffin 100 skipper and team organiser David Witt knew the ability of the 18ft Skiff sailors and selected Tom Clout, Jack Macartney and Marcus Ashley-Jones to join him and the rest of the Ragamuffin 100 team.

Witt and Clout will be the only two members of the group still on the same team when the flag drops for the start of the 2016 JJs tomorrow, while Jack Macartney and Marcus Ashley-Jones will be very much the rivals.

Both Witt and Clout will be on appliancesonline.com.au, Macartney will skipper Coopers 62-Rag & Famish Hotel and Ashley-Jones will skipper Asko Appliances.  All three teams are among the favourites to become 2016 JJ Giltinan champions.

While the battle at the JJs will be no-holds-barred between each of the three teams, the four sailors share a story which will stay with them forever.

David Witt was on the wheel at the time and recalls:  “We were unexpectedly hit by a 45-knot rain squall on the first night and definitely had the wrong sails up when it hit”.

The conditions were so bad that many yachts, including multi Sydney-Hobart winner Wild Oats XI, were forced to retire.

Jack Macartney wrote a gripping, detailed account of the ‘adventure’ on Ragamuffin 100 on that night.  A very small sample of Jack’s commentary is reproduced here to help us gain a little understanding of the dramas which occurred and were handled so brilliantly by the highly-skilled team.

Jack wrote:  “As darkness fell, our intel said the front was 7-10 minutes away but not entirely certain.  Witty firmly ordered for the A3 to be furled, but it took a couple of minutes for this to happen as there was an issue with the furling line.  Witty’s urgency heightened very quickly.”

“Finally, the A3 was furled but we still had to get it out of the lock and on the deck.  Too late, the front came through and whacked us with the full force of Mother Nature’s backhand.”

“Although the wind was 40+knots (there has been many windier) it was the shortness of the transition, intense rain and darkness that swept across us which was seriously disarming.”

“The boat was pinned on its side in a flash with the full main, A3 and J4 violently ragging above us.  Remembering this is a 100ft SuperMaxi with unimaginable loads in any sailing conditions – I don’t think anyone on board had been in this situation before.”

After a period of more than half an hour of dramatic measures to save the situation and avoid having the 144ft mast come crashing down on top of them, could things get any worse?  The answer to that question is yes!

Jack continued:  “Suddenly the boat auto-tacked with people scattered around the deck in the pitch black.  In doing so we literally capsized to 90 degrees; mast in the water up the top, mainsail mostly under water, half the boat under water and indeed the crew.”

“Are we filling up with water? Is everyone still on-board? Will the rig survive?”

“At this point I’m up to my chest in water holding onto the mainsheet winch like a rock crab on Ben Buckler in a big Southerly swell.  Witty was up to his neck in the Ragamuffin spar-bath holding onto the wheel with one hand, garbling instructions which were extremely difficult to hear 3 metres away let alone the rest of the crew further up the boat.  The enormity of the situation struck home – this is now survival for the entire crew and boat.”

Marcus Ashley-Jones was quick to praise the talents of David Witt:  Äfter sailing with Witty for two years, I’ve learnt why he is regarded as one of the world’s best heavy weather downwind sailors.”

“He has a push-it-to-the-limit and just don’t back off attitude.  I’ve found myself wide eyed on many occasions. From laying flat with the mast in the water in the pitch black of night, to doing 40+knots boat speed with all the gear up while going down the Tassie coast.”

“The culture at team Ragamuffin is like nothing else.  It’s about pushing the limits, never giving up, and great mates.”

The three teams, appliancesonline.com.au, Asko Appliances and Coopers 62-Rag & Famish Hotel lined up today, along with the other 27 teams entered for the regatta, in the traditional Invitation Race.

There were at least four different race leaders before De’Longhi took the victory, but three teams withdrew from the race while in the lead.  Seems there may have been superstition on their minds regarding victory in the Invitation Race.

Race 1 of the Championship will be sailed tomorrow (13 February) from 4pm, with the Australian 18 Footers League’s Spectator Ferry leaving Double Bay Wharf at 3.30pm.

The 2016 championship will be one of the closest fought for many years and large spectator fleets are expected to follow the racing.

For those who can’t make it onto the harbour, no matter where you are in the world, you can see all the action live by going to www.18footers.com and clicking on the 18footers TV banner.