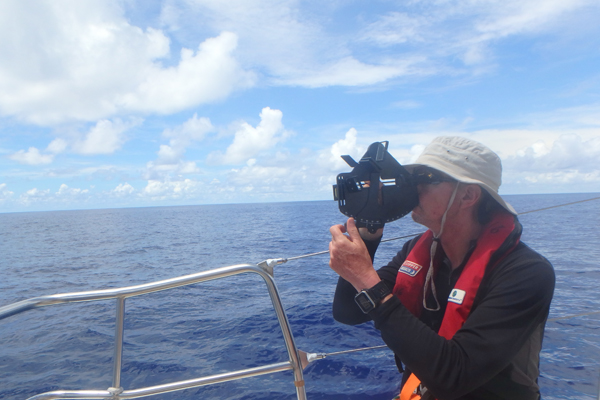 The Da Nang New Discovery of Asia Race could be set for a tighter finish than appeared possible a few days ago, since the frontrunners have all got caught in light winds north of the Spratly Islands, allowing those behind to make up miles on the team ahead of them.

Leader Derry~Londonderry~Doire had to tack south-east before heading north again to make it to Virtual Mark 5 (VM5), which coupled with the light winds, has cut its lead over GREAT Britain to 52 nautical miles. Skipper Daniel Smith says: “Lighter winds near us have slowed us down while the weather files indicate that those further back have had a knot or two more wind causing them to make gains on us.

“We have been working hard for what feels like forever now to get around Virtual Mark 5 and as I write this, it looks as if it is going to happen soon with our current course and our speed meaning it should happen in half an hour. We are keeping our fingers crossed that once round we manage to find enough breeze to start to pull back some of the miles we've lost.”

Skipper Dan and his team have since rounded the mark, and it looks like second and third placed GREAT Britain and Garmin will have to follow a similar course, as both are currently west of VM5. Having all but eliminated GREAT Britain’s lead over it, Garmin is the first of the two to tack south-east.

“Today we are in familiar territory both physically and metaphorically. As we cross our southbound track of six days ago, we once again find ourselves locked in battle with GREAT Britain in the closing stages of a race,” reports Garmin Skipper, Ash Skett.

“With the shifty, unstable and light winds that we are currently experiencing, it's all about tacking angles as we attempt to close the gap to second place.”

It’s not just the leaders that are experiencing slower speeds, sixth placed Da Nang – Viet Nam has also had to tack south-east to round Virtual Mark 4, much to the frustration of Skipper Wendy Tuck.

“Another day out here in paradise. The sun is shining and the sea is nice and flat, the only horrible thing is we are back on ‘heartbreak tack’, or maybe even upgrade it to ‘lose-the-will-to-live tack’. Anyone looking at the Race Viewer will see what we are talking about here. Yes, it looks like we are going the wrong way. Yes, it feels like we are going the wrong way, but we have to do it to get round Virtual Mark 4. It could be worse, we could be doing 20 knots on the nose. Oh yes, that comes tomorrow.”

From 14 February, the wind is forecast to revert back to the north-east monsoon again, and the changeover period will probably see the wind back and stay light, with the stronger winds then coming down from the north-east with a fairly quick increase in speed.